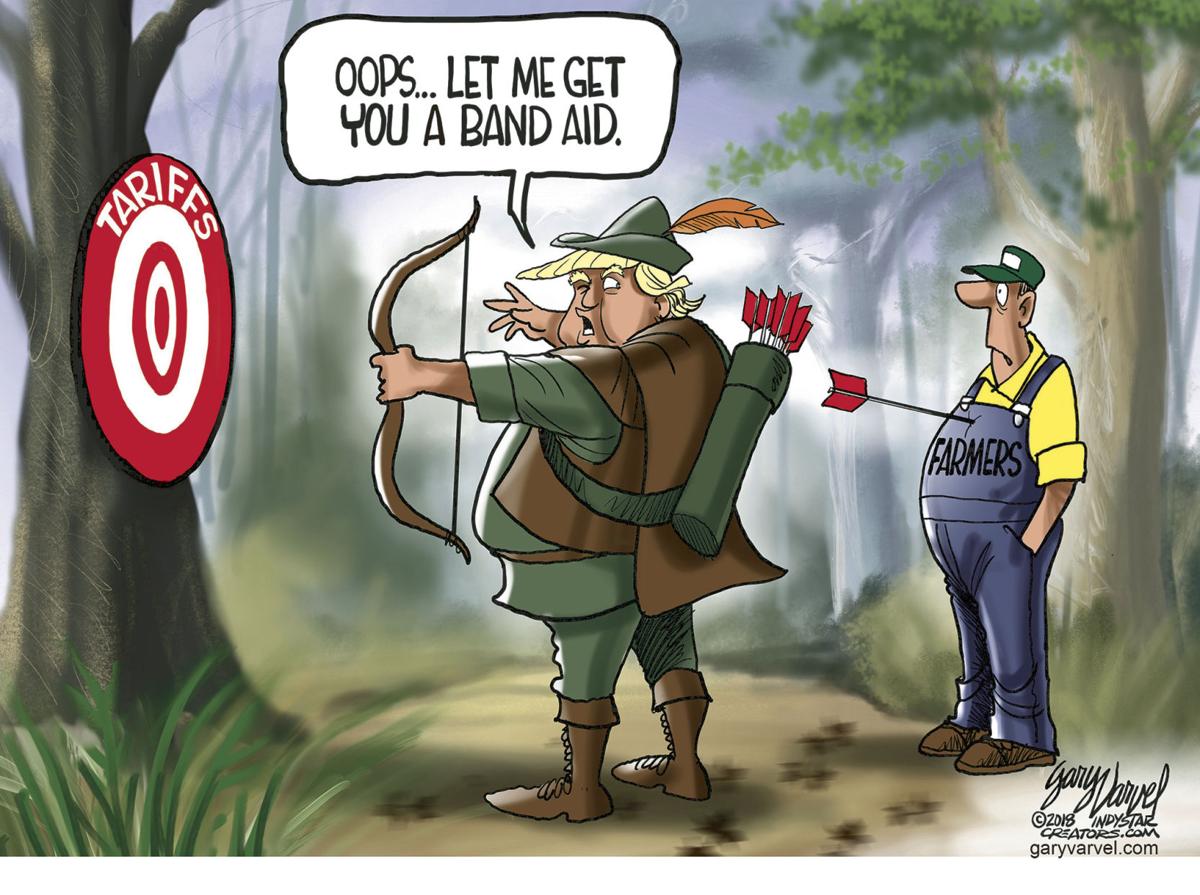 Does he do it on purpose?

As much as the President likes to complain about the market not performing well, more often than not he's the primary cause of poor performance. Yesterday, for example, we were having a lovely bounce (albeit on very low volume) but then Trump suddenly decides to say he's moving ahead and boosting tariffs on $200Bn worth of Chinese goods from the current 10% to 25% – which is up 150% from where they are now and will sock American Consumers with an additional $30Bn in taxes, crippling disposable income and boosting inflation.  But it's $30Bn more in tax breaks he can give to his friends so – winning!

In an interview with The Wall Street Journal, Mr. Trump suggested that if negotiations don’t produce a favorable outcome for the U.S., he would also put tariffs on the rest of Chinese imports that are currently not subject to duties.

"The rest" is another $267Bn with of goods and 25% of that would be yet another $66Bn picked from the pockets of American Shoppers. So we're talking about $96Bn worth of additional taxes aimed at the people who can least afford it and the chances of Trump not [imposing taxes] but instead making a deal with Xi this weekend that widens his already out-of-control budget deficit by $96Bn are slim to none – just as I've warned about from the start. These tariffs have nothing to do with China and everything to do with making middle Americans (the suckers who voted for him) pay for his tax cuts, while wrapping it in a flag of patriotic protectionism that hasn't bought a single job back to our shores in two years.

In fact, for the Red States he supposedly cares about – it's already a ground out as he's LOST 2% of the Jobs in 2018 while the Blue States, with their higher minimum wages and crazy tax policies and Obamacare programs, keep growing.

Now that GM has announced 14,0000 job cuts right in the heart of Trump Country, we don't expect that chart to improve and a continued trade war with China will shut down farming and equipment sales, leading to tens of thousands of additional job losses for the idiots who voted for Trump, thinking he actually gave a damn about them.

These aren't "accidental" losses, these are job losses caused by poor trade policies and poor economic policies and even poor environmental policies as GM is killing production of the Impala, Volt and Cruze – economy cars no longer in demand as relaxed Government mileage requirements led to a shift back towards SUVs and Trucks. Those 3 models had 170,000 units sold in the first 3 quarters vs. over 400,000 Siverado trucks, which GM makes more money on and the salespeople have more incentive to sell now that the "Big Brother Government" is no longer requiring that GM watch their fleet mileage.

Silverados are made in Silao Mexico, Oshawa Canada and Valencia Venezuela and those cities are becoming great again while Cruzes, Impalas and Volts are made in Detroit, Flint & Hamtamck Michigan and Lordstown Ohio (the name didn't save them). Gee, who'd have thought that removing the incentives to make small cars and removing the penalties for making gas-guzzling trucks would have moved jobs from American factories making small cars to foreign factories making large trucks? Yep, I guess no one could have seen that coming, so we should blame Obama, right?

That's why I have no pity for Trump voters in those places – Trump TOLD YOU what he was going to do and now he did it, and these are the real-life consequences, not the fantasy outcomes he said would happen. One can only hope they learn a lesson that will last until November of 2020 – when we can once again vote for change – which is sadly what a lot of Trump's voters will be begging for long before then...

Meanwhile, back to trade talks (or lack thereof) – according to the WSJ:

Chinese Vice Premier Liu He, Mr. Xi’s economic envoy, traveled to Germany this week to attend a China-Europe forum instead of going to Washington to meet with U.S. negotiators. People close to the Chinese government said Mr. Liu’s trip to Germany had been planned for a while, but the timing was firmed up after Mr. Liu decided not to go to Washington for any pre-summit talks. 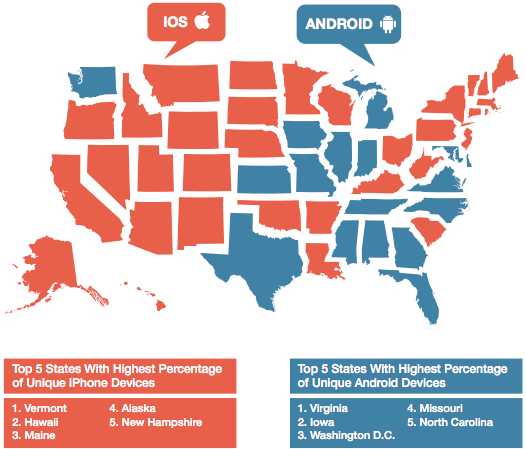 The President said tariffs could also be placed on Apple (AAPL) iPhones and laptop computers imported from China if the U.S. decides to put tariffs on additional goods – that's not helping the market much as AAPL drops back to $171, dragging the Nasdaq, Dow and S&P along with it.  In a September letter to U.S. trade authorities, the iPhone maker said tariffs would disadvantage the company compared with foreign competitors and lead to higher U.S. consumer prices.

As you can see from the map, owning an android phone makes you a Republican but being a Republican doesn't preclude you from owning an iPhone so Apple taxes will be another shock to many in Trump's base as iPhones are just too darned popular to be contained by political boundaries.

Speaking of political boundaries (and World War III), Ukrainian President Petro Poroshenko said the country’s parliament had approved his declaration of martial law for 30 days starting Wednesday, for a number of provinces most vulnerable to Russian aggression. Russia, which thinks they can now do whatever they want under the watch of a Putin Puppet President, seized 3 Ukranian Naval Ships and US Ambassador, Nikki Haley came out swinging on the President's behalf saying Russia's actions "will further increase tensions with Ukraine." Wow, that's a strong response from the Trump Administration almost as strong as when Trump asked Putin if he meddled in the US elections and Putin said "no" and Trump made him do a pinky swear…. 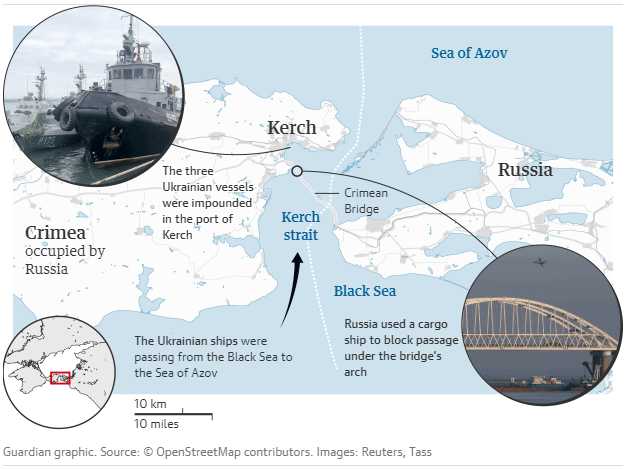 “We don’t like what’s happening (a clear act of war by Russia against the Ukraine) and hopefully it will get straightened out,” said Mr. Trump, who had to pause while Putin had a drink of water but then added that the U.S. is consulting with allies in Europe about the incident.

NATO Secretary General Jens Stoltenberg said the events marked a serious escalation of tensions in the region. “Russia has to understand that its actions have consequences,” said Mr. Stoltenberg, who called on Russia to release the Ukrainian ships and naval personnel.  This morning, a court in Crimea has ordered one of the 24 Ukrainian sailors captured by Russia at the weekend to be detained for two months on charges of illegally crossing Russian borders.

Market-wise, we're still watching the same bounce lines we were watching yesterday. My comment to our Members in the morning chat was:

Still the same 10% lines and index lines we'll be watching as last week's slide below them was just a spike on the daily chart now that it's been erased, so we're at:

Another nice thing about the simple bounce line chart is it's easy to see where the inflection points are and this morning it's the NYSE, which is just over 12,150 at 12,195 at the moment.  Then we'd look to see if  the Nasdaq confirms a comeback but, at 6,651 after already being up 120 (1.8%) it's way beyond unlikely that we'll get another 200 points so we should be very skeptical of all approaches to the weak bounce lines while the Nas is still more than 10% down.

So, if anything, the NYSE failing 12,150 would confirm that the low-volume pop isn't likely to stick and then we can look to short the laggard on the way back down.  How's that for a morning plan? 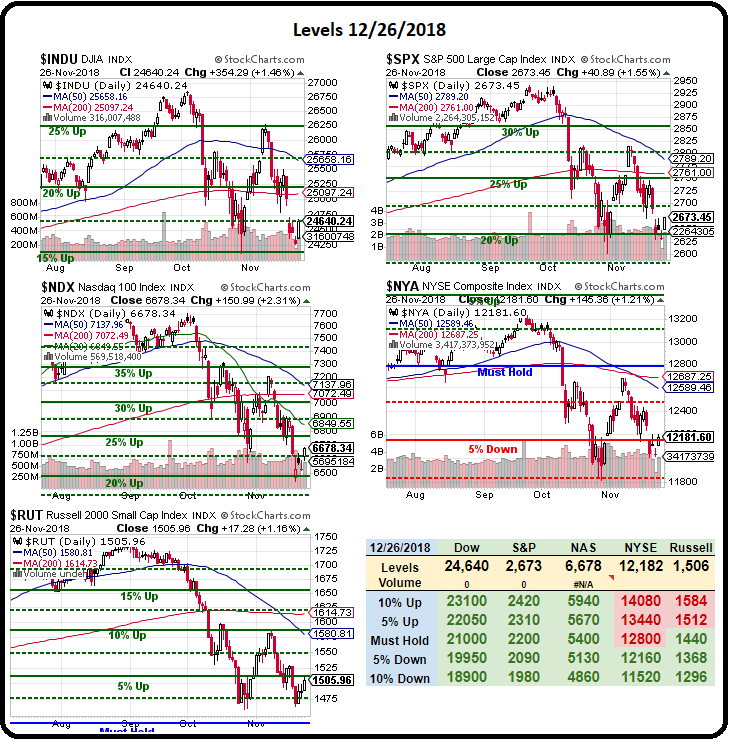