We have been outlining our logic for the big Santa Rally over past 10 days. We won´t go into details again but would like to remind why we view things we view them, as well as we provide a quick index update in order to navigate these markets.

In our, Santa Rally post, from November 27th we wrote;

“It is vital looking beyond the “simple” VIX index in order to understand what the market really is telling us about how risk is priced. Note that recently the spread (VIX curve) has actually come down, despite everything feeling so “bearish”.

“…it is time for a contrarian Santa rally set up where equities bounce higher and volatilities come down. After all, the same guys that were awfully wrong and short the VIX in early October have now reversed the aggregate short VIX trade to being actually long VIX”.

On November 28th we dug deeper into the DNA of the VIX, and explained the fact VIX was actually not showing the fear people tried arguing about. Very few actually understand volatility as an asset, but still media and other pundits love talking about the “fear” index VIX. We outlined the below chart explaining the VIX DNA was “indicating” S&P easily could bounce to 2800 and we concluded:

“We stick to our arguments that a possible unexpected Santa rally could catch the crowd wrong again.” 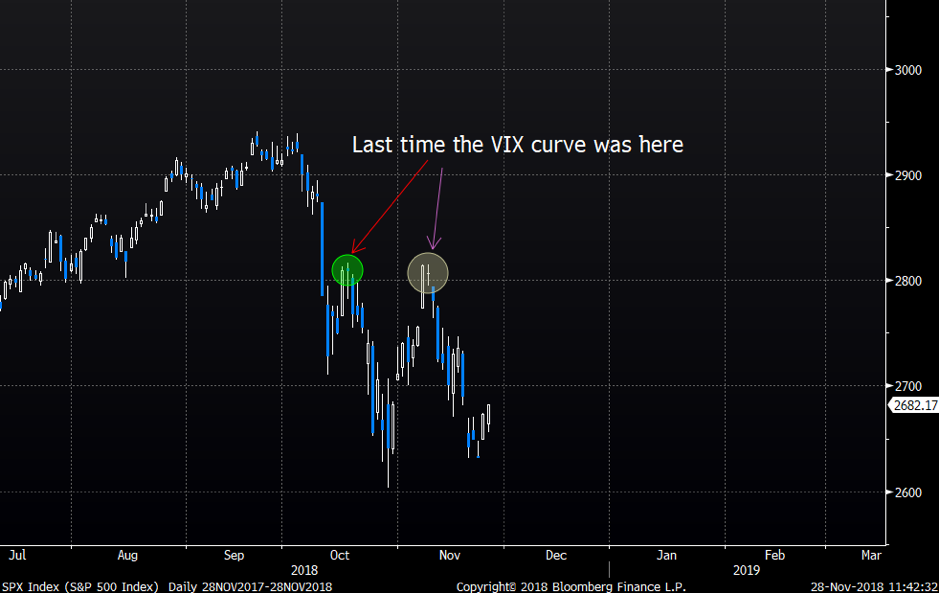 Our theme of crowded trades blowing up has been covered on AskBrokers for weeks. In late November we once again reminded our readers of the last pain trade still about to happen as we concluded:

Lately the CTA index has underperformed when markets have bounced higher, indicating the models have turned bearish the market. This could, ceteris paribus, magnify a possible squeeze higher. The crowded pain trade continues.

On November 30th we showed how investor lately had been loading up on puts relative to calls and concluded once again:

Markets don’t crash when the crowd is Bearish.

Markets are rallying hard today after the G20 went smoothly.

S&P is soaring to recent highs at 2810. This is a rather big level to watch carefully. Note the 100-day average right here. We don’t think this is the start of a new huge bull market, but mainly a flushing out of confused crowded momentum chasers. Index will probably overshoot short term, but objectively looking at the index, it remains in the big range since December 2017. 2800 is a good “mean reversion” level to dance around.

NASDAQ futures show a similar picture to the S&P. The first resistance is at highs we saw in early November around the 7250 level. Note the 100-day average at those levels. Note that NASDAQ trades in a huge range this year and the shorter-term trend is rather non-existent.

Eurostoxx 50 bounces some 2% in early trading today. This index is caught in the 3100/3250 range since mid-October. Europe has its problems and we need more than a dinner to revive this “tired” index. Note the 50 day tight here. First big resistance is at recent highs around the 3250 ish area.

DAX futures are enjoying a huge move higher today. The big movers in Europe are mainly the beaten down autos. Post Trump’s latest tweets, the auto sector is catching a massive bid with German names such as Daimler, BMW etc all gaining some 5% or more. Given the negative sentiment in this sector, we expect most “smart” guys to be short this sector:

…so more pain ahead seems to be the slogan, yet again.