The G20 meeting was a success for both the US and China. The rhetoric has been hard, but don’t forget, these two superpowers both want to avoid a full-blown trade war, if possible. They are also both interested in having a weaker USD.

A strong USD spills over to the Yuan as it is rather tied to the USD. A stronger USD is subsequently a problem. The US doesn’t want a “too weak” Yuan as this “takes away” the effects of the tariffs. A breakdown in talks between Trump and Xi was a possibility, but both had interest in avoiding further stress and market turbulence. Contrary to what many believed (and yes we warned for the possible USD sell off on November 29th), the USD has sold off and affected various assets.

The Yuan has put in a huge move over past two days.

Oil has put in the biggest two-day rally since the implosion started in early October. We outlined the crowded USD longs last week and concluded:

“If the aggregate USD long is to be washed out or not remains to be seen….Depending on your view on the USD, gold and oil could offer interesting trades.”

Oil is up some 7-8% from recent lows. We are not calling a new bull market in oil, but the bounce has definitely taken many by surprise, and risks new “fundamental” shorts getting smoked as oil continues trading higher, now getting an extra boost by the weakening USD.

The shorter-term chart from the October highs. Note the negative trend right around these levels. 55 USD is the first big resistance to watch.

The extreme explosion in Oil volatility, OIV index, was covered here and as so many times before, the same psychological set up played out again. We concluded:

“Whenever assets experience extreme moves accompanied with exploding volatilities, we tend to start preparing for possible contrarian trades. Oil volatility, OIV, has simply exploded to the upside as oil has collapsed. Note the big reversals in oil (orange) since 2015 have all been accompanied with big spikes in the OIV index (white).” (chart from November 29th) 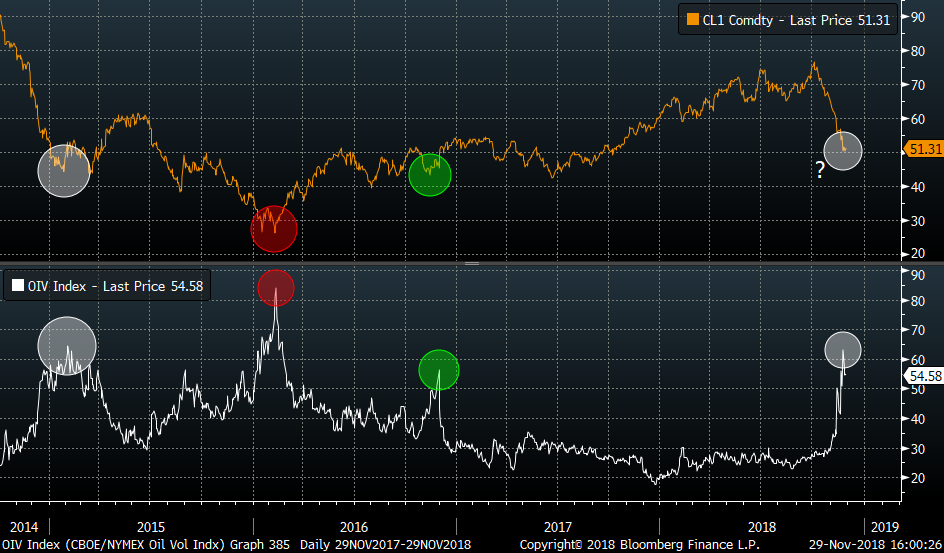 The OIV index has come off sharply over past sessions.

Gold, also a huge USD play, continues pushing higher and was a great USD sell off hedge. The yellow metal continues trading in the channel from August lows. It has had “problems” closing above the 1235 ish resistance, but is currently trading above that level. Watch the close carefully here.

Gold is still a hated asset and positioning of the crowds is all but bullish. Net non-commercial futures positions below.

Gold miners, GDX US, is another space that has been hated and dull for a long time. Watch the negative red trend line for a possible break out.  A break out could prove to be rather violent.