Eventually This Had To Happen: France Investigates Russia Over Yellow Vest Riots

France is investigating Russia over the yellow vest riots. Sorry, Macron, please look in the mirror. 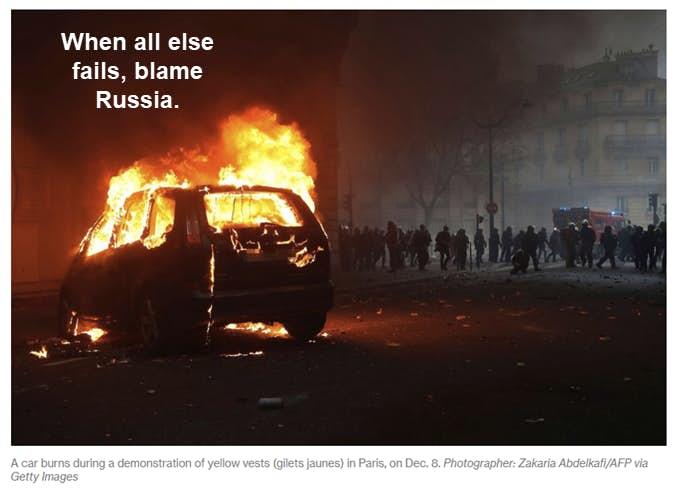 France opened a probe into possible Russian interference behind the country’s Yellow Vest protests, after reports that social-media accounts linked to Moscow have increasingly targeted the movement.

According to the Alliance for Securing Democracy, about 600 Twitter accounts known to promote Kremlin views have begun focusing on France, boosting their use of the hashtag giletsjaunes, the French name for the Yellow Vest movement. French security services are looking at the situation, Foreign Minister Jean-Yves Le Drian said Sunday in a radio interview with RTL.

The Twitter accounts monitored by the alliance usually feature U.S. or British news. But the French protests “have been at or near the top” of their activity for at least a week, according to Bret Schafer, the alliance’s Washington-based social media analyst. “That’s a pretty strong indication that there is interest in amplifying the conflict” for audiences outside France.

Damn. Maybe it's me. Or ZeroHedge. Or the Washington Post. Or anyone else writing about events in France. Even Trump!

Then again, perhaps media interest is up due to four weeks of rioting in Paris. Could that possibly be it?

It's Russia. Let's start the investigation there. If that fails, try Facebook.