In a rare deep-research expedition, Global Intel Hub has uncovered what could possibly be one of the biggest stock manipulation scams of all time.  The reason this case is so monumental is because it flies in the face of 'regulation' that claims to 'prevent fraud and manipulation' when this is happening on a public market!

First let's have a little background - the stock is Revlon (REV) and the source article is here: Raiders of the Lost Corporate Ark: Revlon

Revlon is controlled by a single insider for 30 years billionaire Ronald Perelman.

Perelman has developed in his career a method of hostile takeovers that dates far before Revlon.

The float (available shares for purchase) is low 2.29 M, almost all of which are held short.

We wanted to dig deeper so we contacted the source on this article, Barna Capital.  What they had to say blew our mind (although we know markets are manipulated, it's one thing to say it and another thing to dissect the technicalities of how the manipulation works, and see it in real time).

We asked Chief Strategist of Barna Capital Egor Romanyuk a single question:  How can you prove that Revlon (REV) is being manipulated?  He provided a detailed answer, over the course of several days of back and forth communication, paraphrased here:

Today is one of those days. Right off the open an algo starts selling 100 shares into the bid. The spread is 3%. If I place a bid higher than last sale, let's say 500 shares. It will sell me 500 shares. And will sell 100 shares at whatever bid is lower than last. This is just bluntly manipulation.  It's just moving share price lower. It's only job.

Take a look at lv2 for instance. There's at least a 5 to 1 ratio ask to bid at all times. Strange for a stock that doesn't exist for sale.

When Perelman buys stock, his 15k algo buys move the stock from 50 cents to a dollar. When I buy 15k shares. The stock usually goes down. So I'm working against a short. And he's not.

About 2 million shares out of the remaining float is in the ETF. So that basically not tradable as they only rebalance their portfolios and do not trade actively. That leaves roughly 500k shares tradable period. With 2.6 million already shorted. Magic i suppose :)

Also Barna confirmed that Mittleman and the other shareholders are not allowing their stock for borrowing - which means the short seller can only be Ronald Perelman (RP).

Take a look at this Level2 window for REV in which you will see a wall of offers: 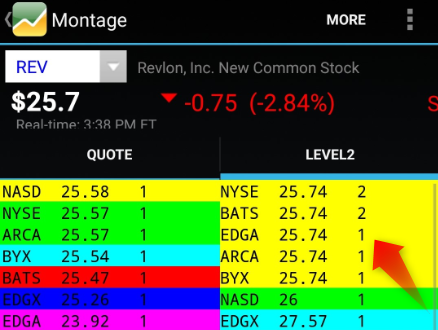 As you can see, there are offers on multiple exchanges, NYSE, BATS, EDGA, ARCA, and BYX - all at the same price. At another point in time, you can see even more offers: 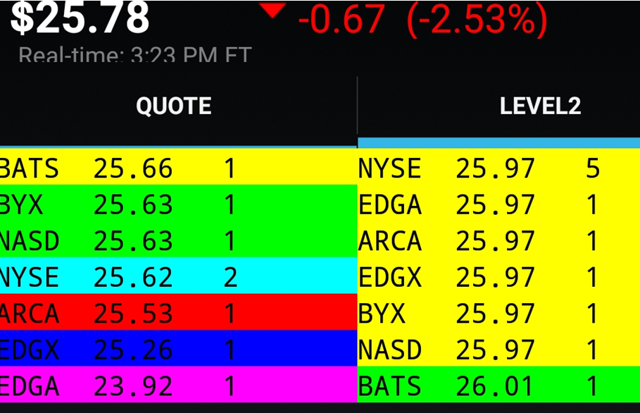 To get to the bottom of this we interviewed Egor Romanyuk, Chief Strategist of Barna Capital. He told us:

Today is one of those days. Right off the open an algo starts selling 100 shares into the bid. The spread is 3%. If I place a bid higher than last sale, let's say 500 shares. It will sell me 500 shares. And will sell 100 shares at whatever bid is lower than last. It's just moving share price lower. It's only job. And here's one more thing. When the algo buys stock, the 15k algo buys move the stock from 50 cents to a dollar. When I buy 15k shares, the stock usually goes down. So I'm working against a short.

If you think this is an anomaly, let's look at the Level 2 from the previous day: 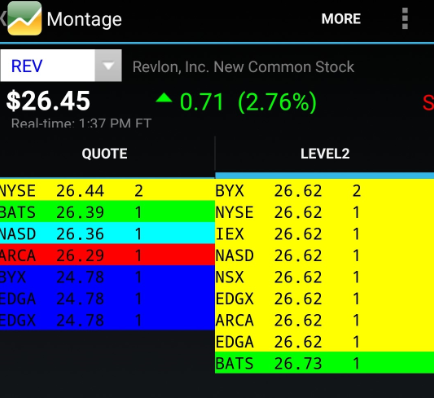 You can see on the screen there is a wall of sell orders. But the float is so small, who can be the seller? We don't know for sure, as data is not transparent; however, the point is there is a short interest here. That short interest - caught in a squeeze - could be forced to panic cover driving REV through the roof. That's how a short squeeze by definition works.

So why would the majority owner of a stock manipulate it lower?

Now for a small background on RP - he has a history of Corporate Raids and his own Wikipedia page: (see below from 'controversies' section) -

In the late 1980s, Perelman was accused of engaging in greenmail.[72] "Greenmail" occurs when someone buys a large block of a company's stock and threatens to take over the company unless he is paid a substantial premium over his purchase price. In the case of someone with a reputation as a corporate raider, the mere act of buying up shares could send a company into a panic and investors into a buying frenzy.[73] Perelman insists he seriously intended to buy every corporation he bought into.[74]

He was first accused of greenmail in late 1986 during a run at CPC International when he bought 8.2% of CPC at around $75 a share and indirectly sold it back to CPC through Salomon Brothers a month later at $88.5 a share for a $40 million profit. Both CPC and Perelman denied it was greenmail despite appearances to the contrary, including what looked like an artificial price increase by Salomon shortly before they sold Perelman's shares.[75]

Another accusation of greenmailing levied against him was the best-known and stemmed from his attempt to purchase Gillette in November 1986. Perelman opened negotiations with a bid of $4.12 billion. Gillette responded with an unsuccessful lawsuit and public insinuations of insider trading. Perelman accumulated 13.8% of Gillette before he made what he would later call the worst decision he ever made and sold his stake to Gillette later that month for a $34 million profit. Gillette had put word out that Ralston Purina had agreed to buy a 20% block of stock, making any attempt by Perelman to buy Gillette much more difficult. Perelman decided to sell his share to Ralston Purina, but before he did so Gillette's executives called him up, asking if he'd sell his shares to them and they'd sell the shares to Ralston Purina. He sold his shares to Gillette and Ralston backed out of the deal.[76]

In April 2001, M&F Worldwide bought Perelman's 83% stake in Panavision for $128 million. This would be unremarkable except that Perelman controlled M&F Worldwide and the price paid for his stake was four times market value. At the time, M&F Worldwide was a healthy company with an excellent balance sheet while Panavision was bleeding red ink. M&F Worldwide's other shareholders cried foul, alleging the only person who stood to benefit from the deal was Perelman and took their complaints to the courts.[77] Perelman insisted the deal was an excellent one and in the best interest of the shareholders because Panavision was well-positioned to profit from the move to digital cinematography.[78]The share price tumbled from six to three after the deal and reflected M&F Worldwide shareholders' lack of confidence.[79] Perelman tried to pacify M&F Worldwide's shareholders with a $15 million settlement, but the judge rejected it as grossly inadequate. Ultimately, Perelman agreed to undo the deal.[80]

Perelman hired Fred Tepperman as his CFO after Tepperman left Warner Communications in 1985. Starting with Pantry Pride, Tepperman worked on every single business deal Perelman orchestrated throughout Tepperman's seven-year stint at MacAndrews & Forbes. Tepperman's tenure came to an abrupt end just after Christmas in 1991 when Perelman fired him for being derelict in his duties. Tepperman had been distracted, he claimed, by caring for his Alzheimer's-afflicted wife of 30 years. A clause in Tepperman's contract entitled him to a large portion of his salary and benefits in the event of an injury that prevented him from being able to work; Tepperman claimed he had suffered such an injury, albeit psychologically, as a result of the effect his wife's condition had on him. His demands totaled $30 million. That number stems partially from Tepperman's salary, which started at $275,000 and rose to $1.2 million in 1990[81] and partially from his large benefits package.[82] Perelman was quick to file a countersuit for fraud, claiming that Tepperman had sneakily changed the company's retirement plan in such a way that Tepperman would personally gain millions of dollars.[81] It took over three years for the case to make it to court. The case ended with a sealed settlement.[81]

Now fast forward to the Revlon case, in which RP has a single goal - take the company private.  He wants to buy the remaining shares for as low price as possible.  If this seems outlandish, just take a look at his career.  But really the proof is in the analysis of the trading data - there is no possible way that anyone other than RP can loan shares out which are keeping the price artificially deflated.

What's the end game?  A potential short squeeze is one, and RP should thank us for exposing this situation as a short squeeze could create a huge profit for him, as he owns more than 84% (plus or minus a few points here) of the entire Revlon.

If this were a penny stock, it wouldn't be news.  But Revlon is a huge brand name and it trades on the NYSE which is owned by the ICE, based in Atlanta, GA.

Here goes the ICE, being cautious about Crypto because it can be 'manipulated' where they have good ol' traditional stocks being manipulated right under their nose!

For traders this is a buy signal for a potential squeeze.  For lawyers and securities activists, this is a must watch as this case unfolds into a potential game changer for regulated markets.  One thing is clear, with the internet and move towards transparency and democratization of markets - everything will be exposed in the end.

This conversation is being recorded, on multiple layers - starting with your ISP!