Yes, Democrats DID start the Ku Klux Klan (and it's still the party of racism)

By Joe Jarvis via The Daily Bell

I don’t want people to think better of Republicans.

I want people to be as critical of Democrats as they are of Republicans.

Both parties are really terrible. But the Democrats too often get a pass because they are better at branding and marketing.

The last time a Republican Presidential candidate got more than 15% of the black vote was 1960.

And yet the Democrats had a former KKK member in the US Senate until he died in 2010. In fact, Robert Byrd wasn’t just in the KKK, he recruited 150 friends to start a chapter!

Robert Byrd used the N-word on live television in 2001. And then was re-elected as the Senator from West Virginia in 2006.

Compare that to the current Democrat Governor from one state over, Virginia. Ralph Northam dressed in blackface when he was 25 (or KKK robes we don’t know which) as pictured in his graduate school yearbook.

This guy is a clown. His defense was that he doesn’t think he is either one of the two in the racist picture, because he distinctly remembers wearing blackface on a different occasion.

That time, he says, he only applied a little bit of shoe polish to dress as Michael Jackson, because that stuff is hard to get off…

I wonder how he knew it was hard to get shoe polish off his face?

(Also, his wife had to tell him it was inappropriate to do the moonwalk during his blackface apology news conference:

As you can see, racism in the Democratic Party runs deep.

And this shouldn’t surprise anyone who has any knowledge of history.

But since most people get their information from memes these days, someone took it upon themselves to educate the masses.

A bunch of Democrats wore white to Trump’s State of the Union address to protest Trump or something, I don’t know.

Which gave birth to the following meme: 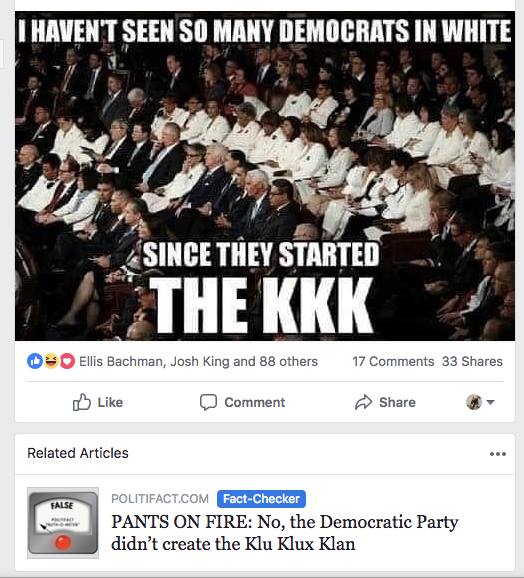 You’ll notice that below the meme, Facebook attached a fact check which claims the Democratic PARTY did not start the Klu(sic) Klux Klan.

Not to get nit-picky, but the meme states that DEMOCRATS started the KKK, not the Party itself. And Politifact’s fact-check rested entirely on whether or not the Democratic PARTY started the Klan.

Even in the article, PolitiFact admits:

One historian confirmed there’s a historic link between the Democrats and the KKK: Many angry Southern whites during the 1860s and 1870s were Democrats, and some joined the KKK. But according to J. Michael Martinez, who wrote the 2007 book “Carpetbaggers, Cavalry and the KKK,” it’s misleading to say the Democratic Party founded the Klan.

Yet Politifact confirms that the Democratic Party honored the first Grand Wizard of the Ku Klux Klan when he spoke at the 1868 Democratic National Convention, shortly after the Klan was founded.

Which brings us back to the original question, did Democrats start the KKK?

It was founded as a political organization to intimidate black and Republican voters in the south during reconstruction after the Civil War.

[T]he KKK engaged in terrorist raids against African Americans and white Republicans at night, employing intimidation, destruction of property, assault, and murder to achieve its aims and influence upcoming elections.

There were two political parties… and the Ku Klux Klan aimed to influence elections AGAINST the Republican party.

Well, that certainly sounds like Democrats started the KKK, doesn’t it? And they started it for overtly political purposes.

The KKK was a political tool used by Democrats to help the Democratic Party win elections.

And that is a FACT.

Of course, another major strategy of covering up racist Democratic roots is saying that it isn’t the party today that it once was.

Well, when exactly did the parties suddenly and miraculously switch platforms?

Neither party added proposed anti-KKK positions to its platform at the 1924 conventions.

In 1963, the Democrat Governor of Alabama, George Wallace, stood blocking a doorway, refusing to allow a black girl to enter a white school that had just been desegregated by law.

And if the Democrats were still racist in 1963, that means Democrat hero Franklin D. Roosevelt was part of the old racist Democratic party. (Big surprise, that the guy who put Japanese Americans in concentration camps was racist).

Some people would say that the flip occurred with the election of President Lyndon B. Johnson in 1964. After all, George Wallace lost the primary against Johnson, which seems to be a rejection of Wallace’s racism.

Plus, Johnson signed into law the Civil Rights Act of 1964.

However, Johnson went on to push “Great Society” legislation throughout the rest of his Presidency, aimed at reducing crime and poverty, and expanding the welfare state and social safety nets.

You might think this would be a great thing to promote equality for disenfranchised blacks.

But historian, sociologist, and economist Thomas Sowell (who is black by the way) has a different perspective (emphasis my own):

Despite the grand myth that black economic progress began or accelerated with the passage of the Civil Rights laws and “War on Poverty” programs of the 1960s, the cold fact is that the poverty rate among blacks fell from 87 percent in 1940 to 47 percent by 1960. This was before any of those programs began.

Over the next 20 years, the poverty rate among blacks fell another 18 percentage points, compared to the 40-point drop in the previous 20 years. This was the continuation of a previous economic trend, at a slower rate of progress…

The murder rate among blacks in 1960 was one-half of what it became 20 years later, after a legacy of liberals’ law-enforcement policies.

So did the Democrats really abandon racist policies, or did they just change tactics? Let me know what you think in the comments.