How Autonomous Vehicles Will Change The Insurance Landscape

When the first automobile insurance policy was sold nearly 110-years ago in 1897, it was likely unthinkable that such a service was really needed. At the time, there were over 18 million horse-driven carriages across the U.S., and only 4,000 or so automobiles.

Today, we have just 9 million horse-powered transportation platforms and over 230 million buses, trucks and cars on the streets! That first insurance policy cost the policy holder $12.25 annually, an amount that anyone of us would gladly double and pay to our insurance. Instead, we pay an average of around $820 a year to keep our autos insured.

The start of a long journey

The journey to fully autonomous vehicles started way back in the 1950s. Back then, and over the next several decades, the focus has primarily been on safety. But mankind is on the cusp of taking its final steps towards full automation. 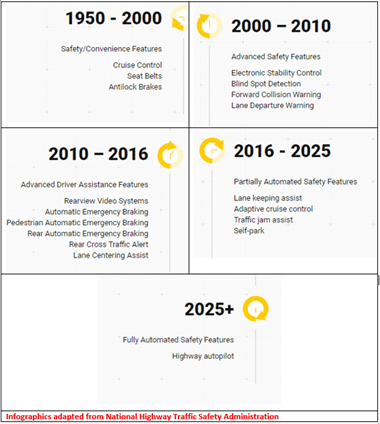 According to the U.S. National Highway Traffic Safety Administration, fully autonomous vehicles are predicted to come to a street near you as early as 2025. In that time, a lot has changed, especially in the auto insurance industry. But by the time fully autonomous vehicles become a reality, a lot more will have to change, including how insurers deal with driverless-cars with respect to:

The auto insurance industry has already shown that it can change and adapt to changing circumstances. The introduction of telematics in offering innovative insurance rebates and related add-on services is just one such example. Today, thanks to “black box insurance”, insurance companies are already using technology for:

However, these innovations haven’t fundamentally changed the basic auto insurance model. With the exception of a lot more automation and technology, the insurance landscape today largely resembles that of the 1950s. All that will change once autonomous vehicles come into their own.

So, what might you expect auto insurance to look like in three to five years from today? Well, there’ll still be insurance policies sold. And premiums and liabilities will still need to be addressed. However, risk profiling and insurance responsibilities will likely need to be redefined.

Some of the more obvious changes to look for include:

Reduction in number of claims: When (not if!) fully autonomous vehicles hit the roads, they will undoubtedly be much safer by today’s human-controlled vehicles standards. Fewer collisions will mean fewer claims. And that will certainly be a boon for the auto insurance industry.

Decline in the number of policies: Insurance is a “volume business” – the more policies outstanding the greater profit an insurer makes. If, as is expected, fully autonomous vehicles give impetus to the “sharing economy”, then there will be far fewer owners of such vehicles. A decline in car ownership is likely to prompt a reduction in the number of car insurance policies sold. And that could hurt the auto insurance business.

Newer types of liability: Since autonomous vehicles, by definition, are “driverless”, accident liabilities will be redefined to bring focus to holding the vehicle (or its manufacturer) responsible for collisions and fatalities. Another type of liability that will likely permeate the insurance industry, and is proving troublesome for your typical car accident lawyer,  will have to do with risks associated with on-board data and communications systems.

Autonomous vehicles will have an increasing number of IT components embedded in them. Liability premiums will have to be created for incidents like hacking, malicious code infestations and general lack of updates to the vehicle’s firmware and software components.

Liabilities will also be redefined based on who owns the vehicle and who was “in possession” of it. In the event that a traveler rents an autonomous vehicle, and it meets with an accident, who is at fault?

The current insurance landscape is largely governed by a driver’s risk profile: driver’s age, driving behaviors and claims history. This model will largely be invalidated once fully autonomous vehicles become ubiquitous. New liability models, based on the vehicle’s operational capability and fitness for purpose at the time of an incident, will need to evolve.

Claim-validation and fraud: Autonomous vehicles will have a huge data component (perhaps 70% to 80% more so than today’s vehicles) to them. Driver and driving pattern information sharing already happens today with many cars and insurance companies – with the help of telematics. But even that technology isn’t fraud-proof.

With autonomous vehicles becoming much smarter in reporting the exact causes of accidents, wanna-be accident fraudsters will likely find it harder to pull off their scams. And that too is a positive for the auto insurance business.

Efficient claim administration:  Everything about autonomous vehicles will be “automatic” – and that includes ensuring auto insurance policies are appropriate for the type of vehicle and purpose of use, and they are all up-to-date and current. Any changes to the car – such as major upgrades, collisions or damages – will automatically be reflected in the policy history.

When it comes time to reassess premiums, it will all happen seamlessly. You’ll never have to call your insurance agent’s office to provide them “copies” and “originals” – the autonomous vehicle will take care it! Efficient claim administration will once again be great for insurance companies’ bottom lines.

Expedited claim payouts: Technically speaking, if an autonomous vehicle policy holder has a valid claim, payouts should be immediate – if not instantaneous! With constant communication and data exchanges occurring between insured vehicle and insurance company, insurers will be able to drastically reduce the wait time – anywhere between 15 and 40 days – before claims are settled.

While this will be welcomed by policy holders, insurance companies will certainly experience expedited cash flow drains as a result of insuring fully autonomous vehicles.

The end of the journey

There’s no doubt that the final leg in journey to having fully autonomous vehicles ply the streets has begun. But today most vehicles, including those manufactured by autonomous car leader Tesla, are still at stage 2 or 3 in the automation level scale.  And then too, we’ve had many challenges to deal with, including several high profile fatalities.

Undoubtedly, like the safe launching and landing of space-exploring rockets, autonomous driving technology will only evolve and get better. But it’s not just technological enhancements that will define the future insurance landscape.

In addition to insurance legislation to deal with driverless cars, there will also need to be parallel changes to traffic and highway codes. The USA and the U.K. are already world-leaders in this respect. But there’s still a lot of work to do in many jurisdictions before the insurance industry is fully equipped to deal with all of the challenges of insuring driverless cars.