- Last week, the United States national debt ticked above US$22 trillion for the first time, an amount equivalent to $67,000 per U.S. citizen

- The U.S. federal government owes more money than any other institution in the history of human civilization and it’s just getting worse

- Below, a few factoids about just how eye-wateringly, bone-chillingly large the U.S. debt has become

- The U.S. debt is now higher than the combined market value of the Fortune 500 and just with the money it spends on interest, the U.S. could run Canada or Mexico 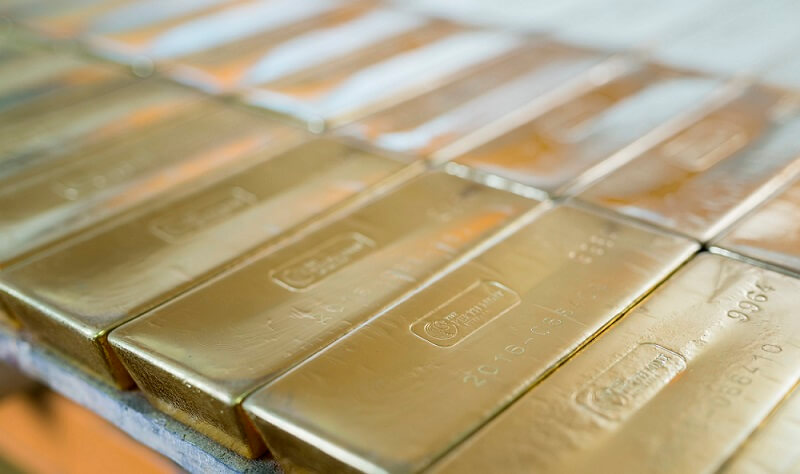 Gold bars worth a small fortune that would only cover a few hours’ worth of U.S. debt accumulation

U.S. debt is now higher than the combined market value of the Fortune 500

The Fortune 500 list includes all the recognizable titans of American business from Apple to Amazon to Exxon-Mobil to the list’s ranking 500th spot, the uniform and laundry company Cintas. Taken together, they basically constitute every major consumer, media, industrial and entertainment product in the United States. If you are the average westerner, the Fortune 500 is responsible for most of your wardrobe, your diet, your home and your leisure pursuits.

The sheer size of Amazon alone is difficult to picture: Millions of products, thousands of employees, hundreds of buildings. And yet, add up the market values of all 500 companies and it’s equivalent to just $21.7 trillion.

Thus, even if the United States nationalized the most profitable segment of its private sector and immediately auctioned them off for cash, it would still have $300 billion owing on its debt. (This would also destroy the world economy. Don’t nationalize things to pay off debts, everybody).

Holding a $22 trillion pile of debt is not cheap. Although the United States benefits from ludicrously cheap interest rates on its treasury bills, in 2019 it will spend $383 billion just to service its debt. By 2023, interest payments are expected to be larger even than the U.S. defence budget. Even now, $383 billion dwarfs the entire federal budget of Canada. Even at a time of its own unprecedented government spending, Ottawa will burn through the equivalent of only US$254.35 billion in 2019. This means that, merely with the money it uses to service the debt, the United States could run the entire Canadian government and still have enough left over to run most provinces. And if the Americans don’t feel like running Canada with their debt servicing money, they could also run Mexico.

Their southern neighbour has a federal budget of only $291.5 billion for 2019.

U.S. debt has been steadily climbing ever since the Sept. 11 attacks, but under Obama it was sent into overdrive. Not all of this was Obama’s fault; the Great Recession, ongoing Asian wars and a boom in entitlement spending on retiring Baby Boomers all helped swell the tab. But still, in eight years of the Obama presidency, the U.S. national debt jumped from $11.1 trillion to $19.85 trillion. Coincidentally, this $8.75 trillion debt surge is the same as the combined value of all the gold ever mined. Every nugget pulled out of the Klondike, every ounce plundered from the Aztecs, every gold bar leach-mined out of Australia: It all adds to about 190,040 tonnes or 6.7 billion ounces. At the current per-ounce price of about $1,300, the world’s goal hoard would be just enough to pay off the U.S. debt accumulated between 2009 and 2016.

Debt from one Trump term could pay for another WWII

President Donald Trump, meanwhile, has only accelerated the Obama-era debt accumulation. In the 25 months since Trump was inaugurated, his administration has overseen a $2 trillion increase to the debt. Given current conditions, that figure is likely to surpass $4 trillion by the end of Trump’s first term. According to the Congressional Research Service, $4 trillion also happens to be the inflation-adjusted cost of U.S. involvement in the Second World War. And let’s take a moment to remember how expensive that war was for the United States. American forces led efforts to defeat two major military powers simultaneously while spearheading the greatest military industrial buildup in history. Every single automotive factory in the United States was retooled to produce equipment for the government. Total wartime aircraft production was almost 300,000, with the Manhattan Project alone costing the modern-day equivalent of $22 billion. At the time, the U.S. contribution to World War II was the most shockingly exorbitant expenditure of resources ever seen, with government spending in some years of the war being equivalent to more than 50 per cent of GDP. But now, an extra $4 trillion in debt is simply budgetary routine.

Since 1958, NASA has landed six manned missions on the moon, sent 26 probes to Mars, launched 135 shuttle missions and blasted two spacecraft into interstellar space. And that’s just its space stuff: NASA has also spent years dominating aircraft and earth science research, including some of the most critical data confirming the existence of anthropogenic climate change. Add it all up, and the combined cost for 61 years of NASA is an inflation-adjusted $1.16 trillion. For context, over just the last 12 months (from Jan. 31, 2018 to Jan. 31, 2019), the United States piled up an extra $1.5 trillion in debt.

Jeff Bezos’ fortune would cover only 34 days of debt accumulation

There’s a lot of talk lately about how rich people should pay more taxes. However, given the sheer scale of U.S. spending right now it would take an awful lot of these extra taxes to come close to running a balanced budget. For example, consider Amazon founder Jeff Bezos, the richest man in the world. His net worth is roughly $136 billion. Right now, the U.S. adds another $4 billion to its debt every day. Thus, if Bezos gave his entire fortune to the U.S. government, it would only cover 34 days of debt accumulation. And this is just new debt. If Bezos’ fortune was used to cover all U.S. federal spending, it would run out in only 11 days. Bezos is one among 26 billionaires who collectively control $1.4 trillion – a wealth equivalent to that owned by nearly four billion of the world’s poorest. Still, even that $1.4 trillion would only cover a year’s worth of U.S. debt accumulation and about four months’ worth of federal spending overall.

In one year, the per-household share of the debt could buy a new car

According to its most recent census figures, the United States has 118,825,921 households. This means that the $1.5 trillion in debt accumulated over just the past year is equal to about $12,605 per household. This would be just enough for every single household in the United States to buy a brand-new Nissan Versa. When accounting for the total $22 trillion debt, that per-household share jumps to $185,000, enough to buy a new Ferrari or Bentley. The per capita share of the debt is particularly dramatic when compared to the U.S.’ northern neighbour. As recently as the 1990s, Canada was so debt-ridden that it was considered one of the worst economic basketcases in the G20. Today, per-capita Canadian federal debt is equal to US$13,588.51. In the U.S., the same figure is nearly five times higher at $67,000 per American.

The U.S. just built history’s most expensive warship. It cost five days’ worth of deficit.

The USS Gerald R. Ford, an aircraft carrier commissioned in 2017, is the largest and most expensive warship ever built at US$12.9 billion. For context, HMS Dreadnought, the super-powerful 1906 battleship that revolutionized naval warfare, only cost the modern equivalent of about $273 million. For 2019, the U.S. budget deficit is expected to be $897 billion. This means that only five days’ worth of deficit would be enough to fully cover the cost of the USS Gerald Ford. And the deficit merely represents new instances of the government spending money it doesn’t have. Total debt accumulation is even higher, since the existing debt continues to balloon on its own if it’s not being paid off (and the Americans haven’t even tried to pay down their debt since 2000).

The vast majority of this is entitlement spending

It would be tempting to assume that the United States is piling up all this debt because of big, tangible budget items: Battleships, fighter jets, highways, disaster relief, etc. But the majority of U.S. spending is eaten up by cheques: Millions of relatively small-denomination cheques handed out as entitlement spending. The U.S. government will spend $4.4 trillion in 2019, of which only $3.5 trillion will be covered by tax revenues. Of that $4.4 trillion, $2.7 trillion is spent on what is known as “mandatory spending”: Social security, Medicare, Medicaid and the like. As a result, much of the expansion in U.S. spending is due to factors beyond the government’s control: Higher healthcare costs and more retired Baby Boomers collecting pension cheques.

This is all happening during good times
Throughout U.S. history, periods of massive debt accumulation have usually coincided with bad times: The Great Depression, the Civil War, etc. By any economic measure, however, the United States is currently doing fantastic. Major foreign wars have been stepped down. The jobless rate is at a 49-year low. Economic growth has been topping four per cent. The last time the U.S. economy was this good, the federal government was running budget surpluses to pay down the debt, rather than piling up debt faster than ever. The implication is that when the boom inevitably ends, U.S. deficits are set to explode even faster. “The economy is going well and we are looking at deficits that are four per cent of GDP going forward,” Congressional Budget Office director Keith Hall said in late January.

“That is an unusual thing.” 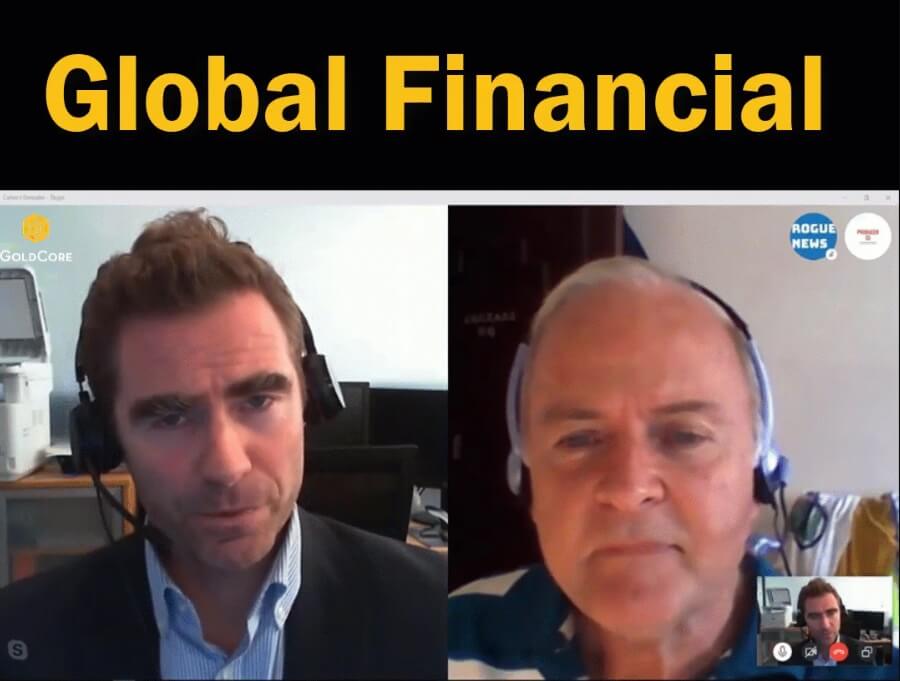 Australia's Gold ... Safely in the Hands of the Bank of England (SMH.com)

For The First Time Since 2000, Most Assets Are Overbought (ZeroHedge.com)

Most Americans & Europeans Are Terrified About Retirement (ZeroHedge.com) 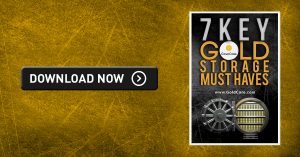 Listen on iTunes, Blubrry & SoundCloud  & watch on YouTube above