According to the poor financial results in the first quarter of the year, the top primary silver miners are now likely paying the market $2 an ounce to take their silver.  And, the financial situation for these silver producing companies may even worsen in the second-quarter if the oil price continues to increase while the silver price remains weak.

I have to say; it is a real shame that the few companies in the world that are producing REAL WEALTH are not being paid a decent price for their product.  While the Amazons, Netflixes, Apples, and Facebooks of the world are providing a great deal of technology and service to the market, these companies and their products are not "Stores of Value."

Why?  Well, as soon as a new Apple I-phone is sold, it begins to deteriorate and likely becomes obsolete (or broken) within five years, which is precisely why the company makes a fortune upgrading and providing new I-phones.  Don't get me wrong, I have to applaud Apple for developing a high-tech consumption racket for the masses, but again, they are not stores of wealth.  Furthermore, it takes a tremendous amount of energy in the massive supply-chain system to provide these increasingly complex and advanced I-phones.

Moreover, highly advanced technologies don't last as long as they are inherently fragile.  I can assure you that if you take an I-phone and a silver coin and place them in a chest underwater for 100 years, the silver coin will still be usable, but the I-phone will be toast.  Thus, the reason gold and silver win the title of being the top "Stores of Wealth."

I will be putting together a video on this subject matter in the next few weeks.  However, the typical investor no longer understands what "Stores of Wealth" are because they have been brainwashed to believe DEBTS = ASSETS.  We must remember, debts are nothing more than ENERGY IOU's, while gold and silver are stores of "ECONOMIC ENERGY"... Big difference.

Okay, let's get back to the primary silver miners giving their silver away.

According to my calculations, the top primary silver miners in my group estimated average breakeven for Q1 2019 was $16.54.  With the current silver market price (close of Friday) of $14.38, the group as a whole is now losing $2 an ounce to produce and sell silver: 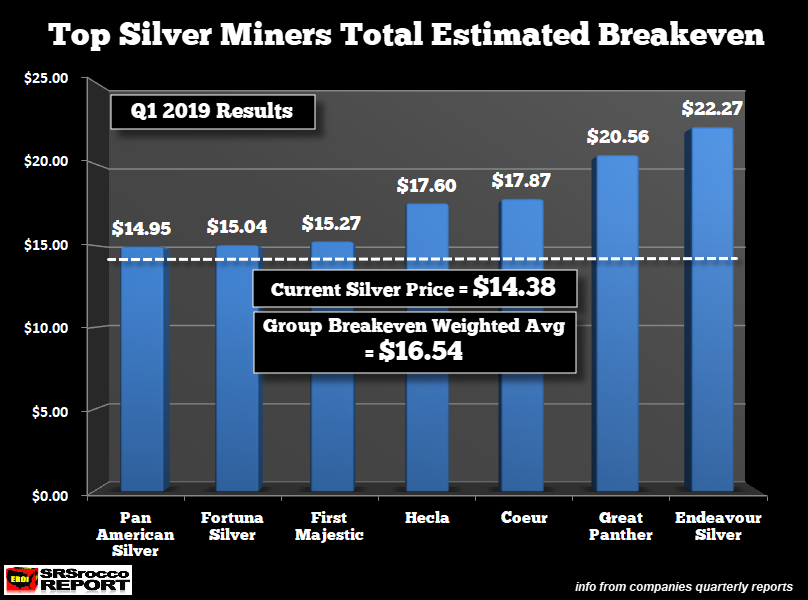 Now, the estimated breakeven figures above were based on an average silver price of $15.57 in Q1 2019.  Thus, Pan American Silver, Fortuna, and First Majestic made small profits, but are now likely selling silver at a loss.  Endeavour Silver had such a high breakeven due to a 26% reduction in production and higher costs that quarter.

And, as I stated, the primary silver miners second-quarter results could be even worse as energy costs continue to increase while the silver price has fallen: 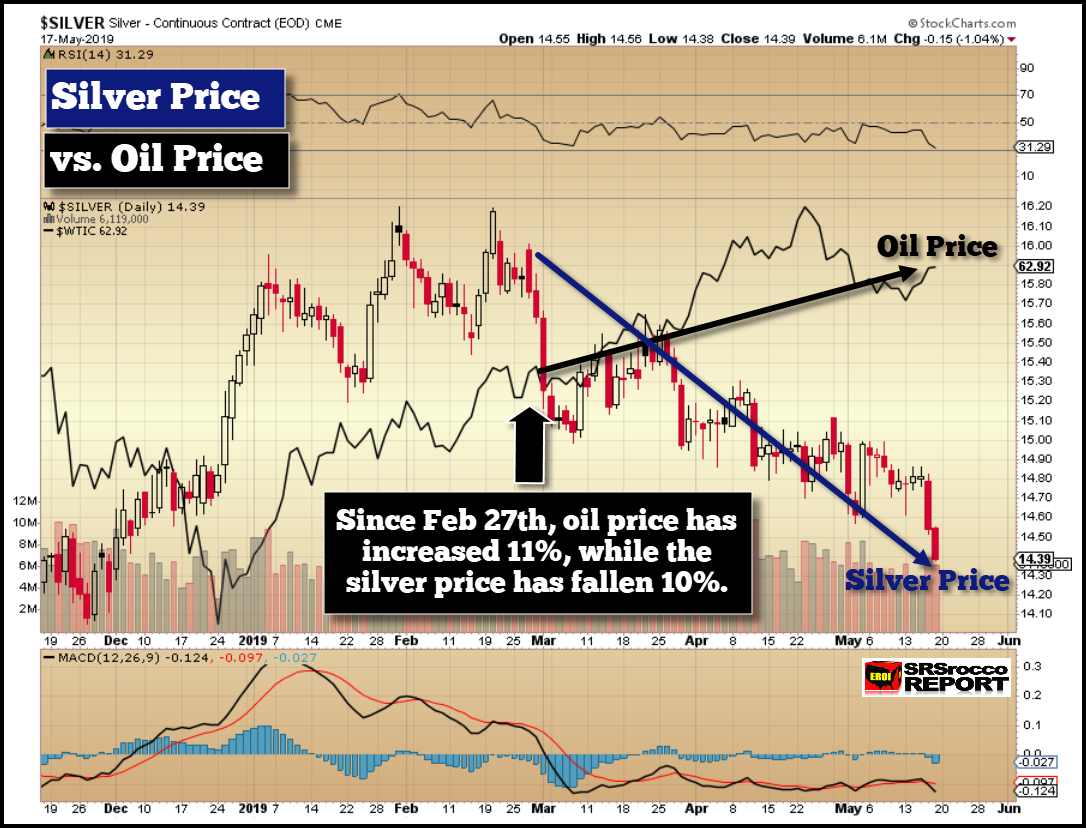 Since Feb 27th, the oil price has increased by 11% while the silver price fell 10%.  So, the rising energy costs will push the primary silver miners production costs even higher.  I looked at the data from the U.S. Energy Information Agency, and these are the average prices of WTIC oil for the following periods:

While the companies shown in my group don't include all the primary silver miners in the world, they do provide a pretty good indicator of what it cost to produce silver.  Fresnillo LLC, the largest silver producer in the world, was not included in the data because the company reports financial results bi-annually (June & Dec) and most of their revenue now comes from their gold production.  Last year, Fresnillo LLC's gold revenues were 50% of total revenues while silver sales were only 36%.

Regardless, the silver miners in my group produced 76 million oz (Moz) of silver last year: 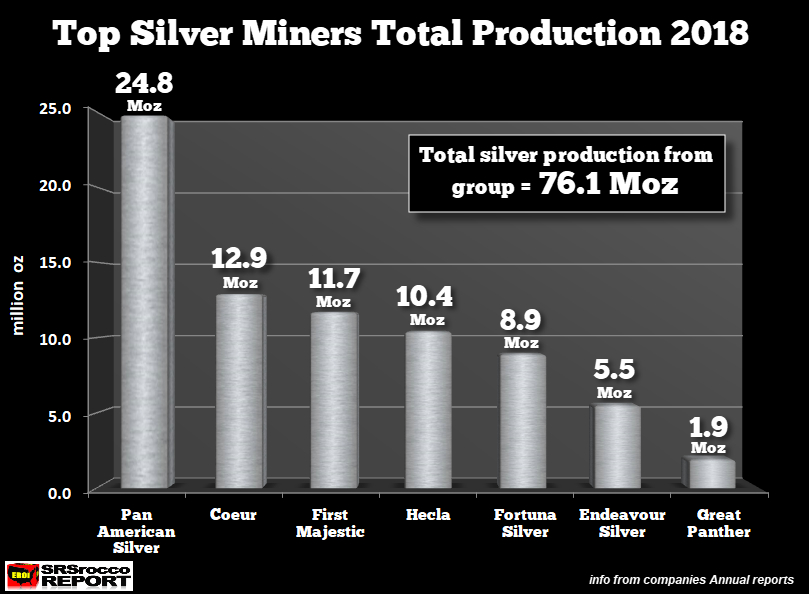 However, it is true that the majority of silver comes as a by-product of base metal mining.  And, according to the 2019 World Silver Survey, 60% of the global silver mine supply is a by-product of copper, zinc, and lead base metal mining.  But, I can assure you that a copper or zinc-lead producing company isn't giving away their silver for free, as some individuals might believe.

For example, the third largest silver producer in the world is from a copper miner, KGHM Polska Miedz in Poland.  In 2018, KGHM produced 36.5 Moz of silver.  KGHM's profit for the year was approximately 8.2% of total revenues.  However, silver metal sales accounted for 11% of the total revenues last year.  So, if KGHM gave away their silver for nothing, as many assume, then the company would have suffered a loss instead of a decent profit.

Furthermore, when the world finally enters into a global recession (or depression), base metal prices will collapse, forcing the copper, zinc, and lead producers to rely more heavily on their by-product silver revenues to fortify their balance sheets.  And, in time, depressed base metal prices will force many of these mining companies to cut back on production.  Thus, a decline in by-product silver mine supply will occur right at the very time when global fiat currencies come under serious threat as they print more money to offset the collapsing economy.

I will also be putting together a video on the REAL COST TO PRODUCE SILVER as there still seems to be a lot of confusion by individuals who don't understand that "Cash Cost Accounting," stated by the mining companies, is bogus metric to bamboozle less sophisticated investors.  But, briefly, cash costs or even the All In Sustaining Cost (AISC), deducts by-product metal sales to provide an artificially low production cost.

Just as I mentioned with the example of KGHM above, they likely publish a lower copper cost by deducting their by-product silver metal revenues.  However, if KGHM didn't include their silver revenues in the net income statement, they would be showing a loss instead of a profit.  This is the same sort of accounting that the primary silver miners use, but they deduct their base metal and gold revenues... which could be quite large when we consider that Pan American Silver's by-product credits of $463 million in 2018, was 61% of total revenues.   Which means, Pan American silver sales only represented 39% of the companies total metal production last year.

When a company like Pan American Silver deducts 61% of its metal revenues from its silver cost, it's no wonder it can claim a low All-In Sustaining Cost of $9.68 an ounce.  But, according to my calculations, Pan American Silver's estimated breakeven for 2018 was $14.53 based on the average silver price last year of $15.71 (using my adjusted income approach versus total revenues).

Lastly, the primary miners in the group above are really struggling now as the silver price is falling while energy costs increase.  But, I believe the primary silver miners will be few of the best companies to own in the future when the fundamentals finally kick into a seriously over-valued and bloated stock market.