President Trump claims he is a counterpuncher. Well, after bullying China over tariffs, China has thrown a counterpunch, and the international equity markets have tanked.

When it comes to trade, President Trump is clueless and dangerous. As he stated recently, “I happen to think tariffs for our country are very powerful.” He should have replaced the word “powerful” with the word “damaging.”

Alas, Trump and his trade team embrace the notion that the U.S. trade deficit, something the U.S. has registered every year since 1976, is a “bad” thing, something that should be dramatically reduced (or eliminated) if America is to be First. They also believe that the culprits for this “bad” state of affairs are unfair trade deals and unfair trade practices employed by foreign countries. Their elixir to eliminate the trade deficit is a strong dose of tariffs and other anti-trade policies imposed on foreign exports.

Now here is where the simple analytics of the trade deficit can be used to prove the cluelessness of the Trump trade team on “trade,” of all things, and the utter futility of its policy prescriptions having any impact on America’s aggregate trade deficit. In economics, identities play an important role. These identities are obtained by equating two different breakdowns of a single aggregate. Identities are interesting, and usually important, by definition. In national income accounting, the following identity can be derived. Indeed, it is the key to understanding the trade deficit.

The table below shows that U.S. data support the important trade identity. The cumulative trade deficit the U.S. has racked up since 1975 is about $47.003 trillion, and the total investment minus savings deficit is about $43.233 trillion. 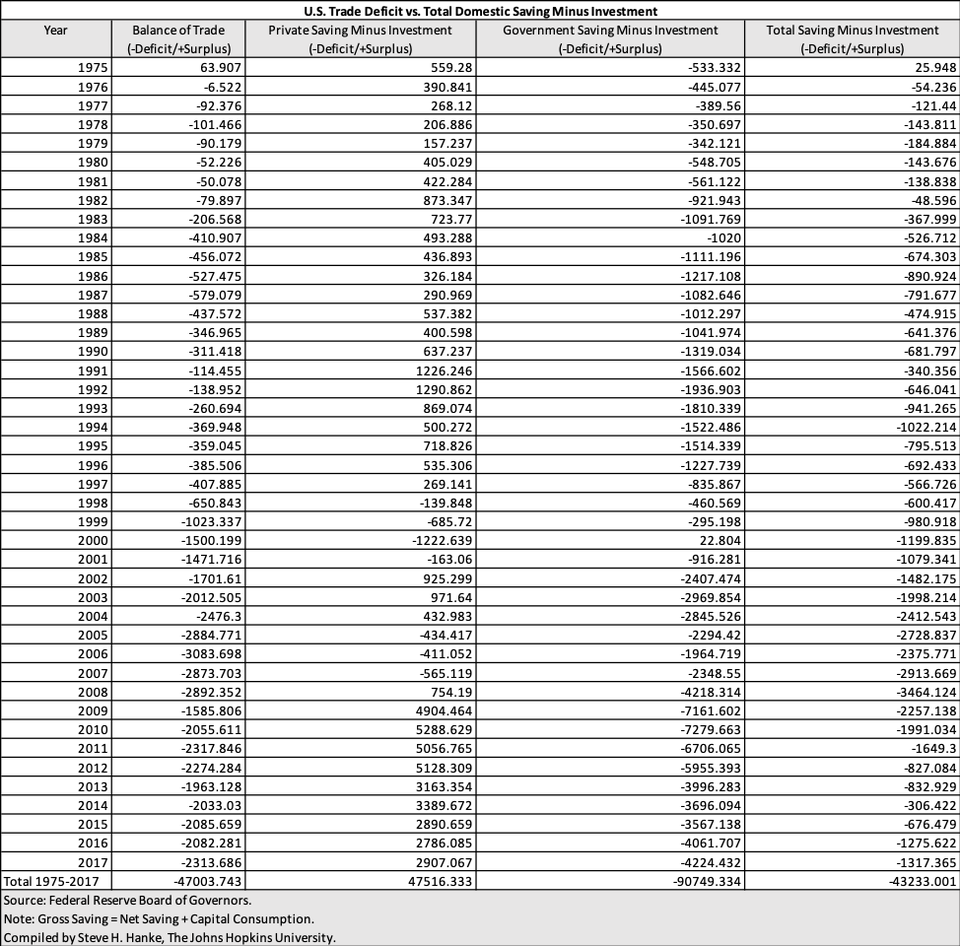 U.S. trade deficits are not caused by so-called unfair trade practices. They are made in the good old U.S.A. President Trump can bully countries he identifies as unfair traders, he can impose all the restrictions on trading partners that his heart desires, but it won’t change the trade balance. It will only alter the composition of those exporting to the U.S. And, by affecting this composition, the president’s interventions will hurt the U.S. consumer.

As it turns out, the Trump administration’s fiscal policies will continue to throw a spanner in Trump’s trade policy works. If his fiscal deficits are not offset by an increase in private savings relative to private investment, increases in the Federal deficit will translate into larger trade deficits. So, the U.S. trade deficit will not only be made in the good, old U.S.A, it will be made by President Trump himself, an arch-enemy of trade deficits.

It’s time for President Trump to connect the dots and get real on trade. But, that’s not going to happen. On trade, Trump and team are clueless. The U.S.-China trade war will continue, with Trump throwing punches and China counterpunching.

This piece was originally published on Forbes.com