The state of (non) affordability in Canada’s hottest housing markets

Canadian banks, real estate agents and mortgage lenders are all celebrating the so-called “soft landing” in the nation’s housing market. They point to how prices are gradually “normalizing” and, thanks to a decline in mortgage rates, how homeownership is now more affordable. But that’s far from the truth!

Good for the goose but not for the gander

In the last few months, if you’ve put up your home for sale in one of Canada’s “hot” housing markets, like Ottawa, Toronto or Vancouver, then you’re likely breaking out the champagne and celebrating.  However, what’s good for the goose (sellers) is not necessarily good for the gander (buyers).

While home prices have recovered somewhat, the rising cost of living, ever increasing household debt and growing employment uncertainty (Canada actually shed 1.8k jobs in October 2019) is adding to a housing affordability crisis that mortgage lenders and home loan financiers aren’t talking to their clients about. And given that home prices are growing faster in many markets, like Ottawa, than median incomes, the b-word (“bubble”) isn’t entirely out of place to use.

Clearly, if that bubble were to burst, what’s not so good for the gander might also not be too good for the goose!  Prospective homebuyers must heed the signs and plan their homebuying accordingly.

Before you complete that oft-repeated (and very predictable!) statement, in the real estate context, here are some startling numbers to bear in mind:

The trajectory of pricing is similar – upward and towards the right – when we consider how things are on a year to date basis. YTD prices for average Ottawa residential homes and condos stood at $485,000 and $303,000 respectively. That’s an 8.3% and 9.1% spike in real estate pricing respectively.

Sure, these statistics look great for anyone selling an Ottawa home or condo. It would seem as though the only direction that things can go, for the real estate market in Ottawa from here on, is up! But don’t let those numbers fool us. Let’s look at the other side of the equation, shall we?

“…must come down!” – that’s the second part of that oft-repeated cliché we talked about at the beginning of this section.  For buyers in the nation’s capital city, and other heating property markets, it seems as though their dreams for quick and affordable homeownership can only head one way: Down, down…down!

Not surprisingly, another “hot” Canadian real estate market – Toronto – exhibits similar signs. From Jan 2018 through the first half of the year, prices saw a steady decline across all classes of real estate – freehold, condos and detached homes. 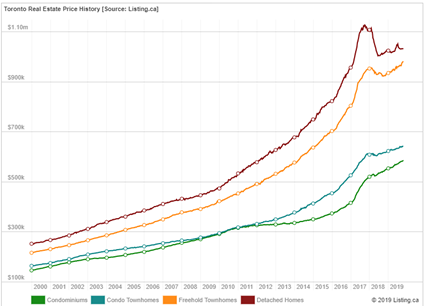 However, prices are back on the rise, making housing affordability in Canada’s largest city a real issue. And Ottawa and Toronto (the capital city and the largest city) aren’t poster children for this “affordability” challenge that Canada is facing. A report by Royal Bank of Canada (RBC), prepared after the new mortgage stress test rules took effect, shows how bad the affordability crisis is. 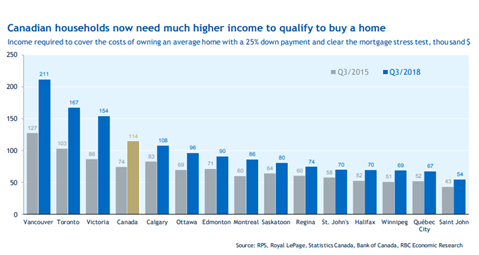 If you think owning real estate in some of Canada’s hottest markets is something achievable for the “average” homeownership aspirant – think again. The RBC report shows how things were in Q3/2015, and how bad they got in Q3/2018 – just 3-years later. For instance, in that short period of time, it now costs:

Across the board, the share of household income that goes to covering homeownership costs has increased. As of Q3/2018, it cost residents of Toronto, Ottawa, Vancouver, Montreal and Calgary, 75.3%, 38.6%, 86.9%, 45.2%, 43.4% of their household earnings respectively to own a home. And even though homeownership in the  Ottawa real estate market is, comparatively, less challenging than the national average (average household income spent on housing on a Canada-wide basis is 53.9%), if 40% of a family’s income goes on housing, how will that family pay for other necessities?

But for Canadians, there’s more to dread about than house prices in Ottawa or Toronto. A Bloomberg analysis report from July 2019 indicates that the nation’s housing market is now in bubble territory. And if that bubble bursts, as it must to correct itself, not only will buyers pay the price, but prospective sellers might also get the short end of the proverbial stick!