Funny, no one seemed to consider what to do with the massive amount of wind turbine blades once they reached the end of their lifespan.  Thus, the irony of the present-day Green Energy Movement is the dumping of thousands of tons of "non-recyclable" supposedly renewable wind turbine blades in the country's landfills.

Who would have thought?  What's even worse, is that the amount of wind turbine blades slated for waste disposal is forecasted to quadruple over the next fifteen years as a great deal more blades reach their 15-20 year lifespan.  Furthermore, the size and length of the newly installed wind turbine blades are now twice as large as they were 20-30 years ago. 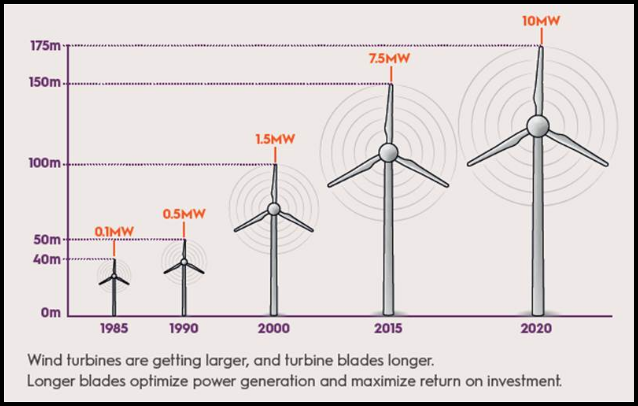 Honestly, I hadn't considered the tremendous amount of waste generated by the so-called "Renewable" wind power industry until a long-term reader sent me the link to the following article, Landfill begins burying non-recyclable Wind Turbine Blades:

Hundreds of giant windmill blades are being shipped to a landfill in Wyoming to be buried because they simply can’t be recycled.  Local media reports several wind farms in the state are sending over 900 un-reusable blades to the Casper Regional Landfill to be buried.  While nearly 90 percent of old or decommissioned wind turbines, like the motor housing, can be refurbished or at least crushed, fiberglass windmill blades present a problem due to their size and strength. 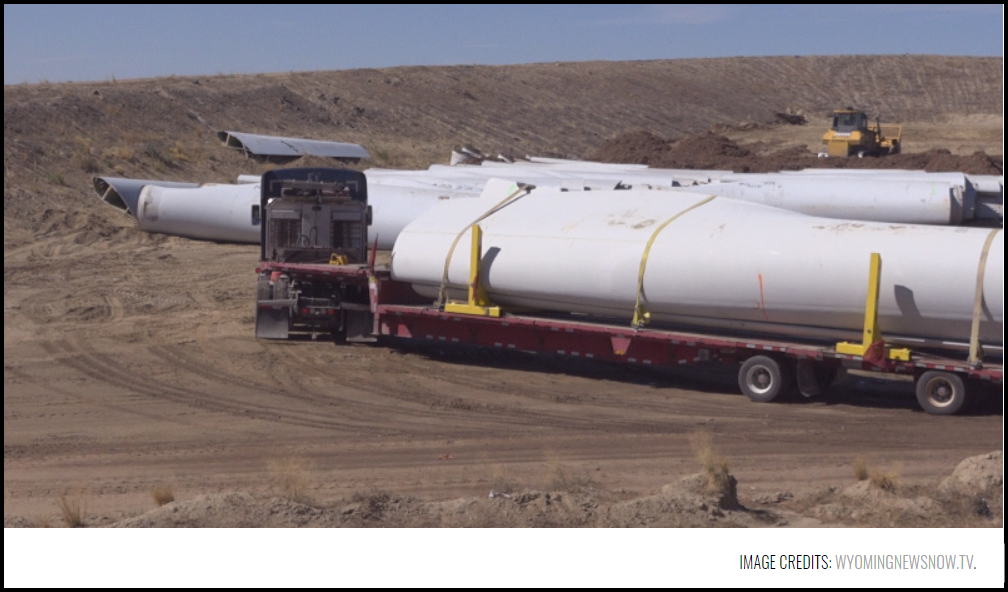 “Our crushing equipment is not big enough to crush them,” a landfill representative told NPR.

Prior to burying the cumbersome, sometimes nearly 300-foot long blades, the landfill has to cut them up into smaller pieces onsite and stack them in order to save space during transportation.

Wyoming isn't the only landfill accepting worn-out wind turbine blades.  They are also being dumped in IOWA and SOUTH DAKOTA.  Although, there's probably a lot more landfills across the country, especially in Texas, that are accepting old wind turbine blades.  Texas has the largest amount of wind-generated energy in the United States at 27,036 MegaWatts, followed by Iowa (8,965 MW), Oklahoma (8,072 MW), Kansas (6,128 MW), and California (5,842 MW). (source: Wikipedia)

So, with Texas powering more wind energy than the next three  states combined, they will be discarding an enormous amount of wind turbine blades in the state's landfills over the next 10-20 years.

Now, why is the Wind Power Industry discarding its blades in landfills?  Unfortunately, due to the way the blades are manufactured, it isn't economical or practical to recycle them even though some small-scale recycling has been done.  Here is an image from the Low-Tech Magazine website explaining why the large wind turbine blades aren't recyclable: 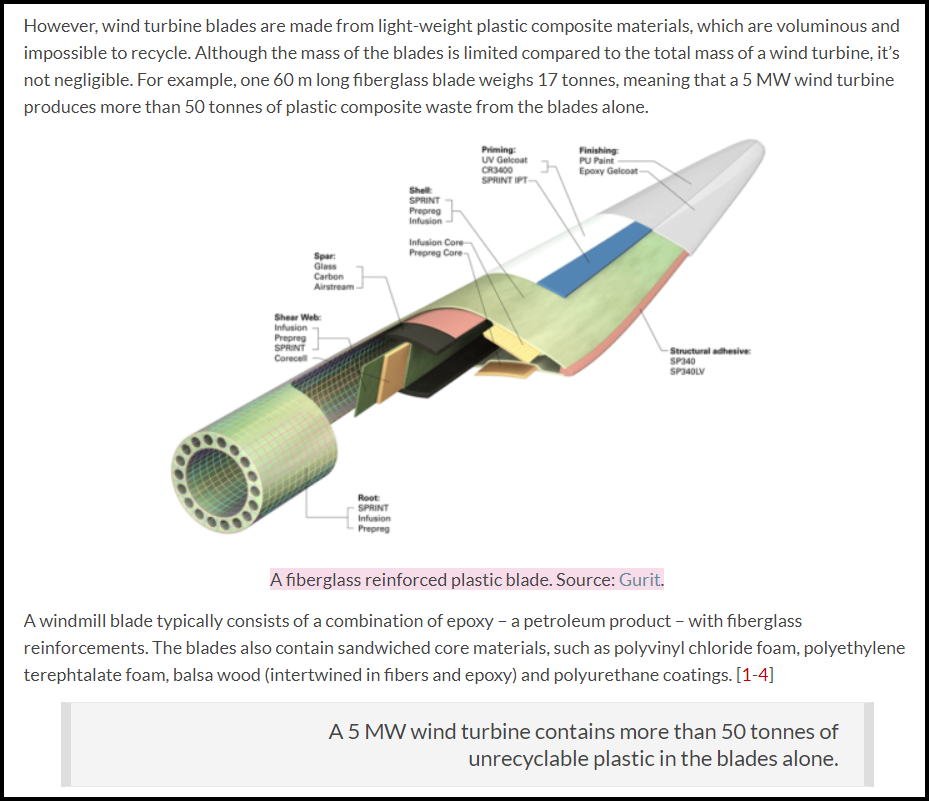 The wind turbine blades are a toxic amalgam of unique composites, fiberglass, epoxy, polyvinyl chloride foam, polyethylene terephthalate foam, balsa wood, and polyurethane coatings.   So, basically, there is just too much plastic-composite-epoxy crapola that isn't worth recycling.  Again, even though there are a few small recycling centers for wind turbine blades, it isn't economical to do on a large scale.

As I mentioned, the wind power units built today are getting much taller and larger.  Check out the 83.5 meter (274 feet) long wind turbine blade being transported for a 7 MegaWatt system: 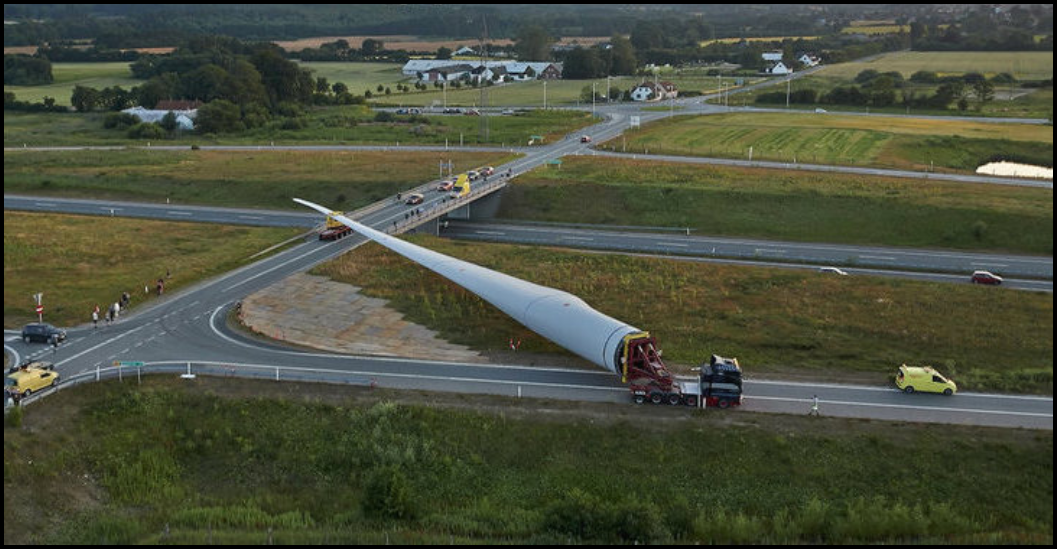 This picture was taken in 2016.  So, in about 15-20 years, this blade will need to be replaced.  Just think of the cost to remove three massive blades this size, cut them up, transport them to the landfill and cover them with tons of soil.  Now, multiply that by tens of thousands of blades.  According to the data from Hochschule Bremerhaven & Ahlstrom-Munksjo, the wind industry will generate 50,000 tons of blade waste in 2020, but that will quadruple to 225,000 tons by 2034.  I have read that some estimates show an even higher amount of blade waste over the next 10-20 years. 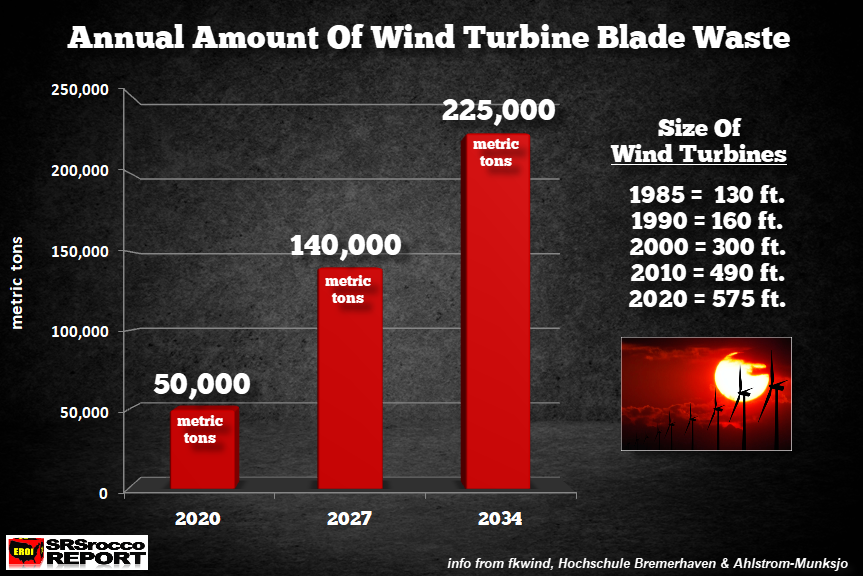 I don't believe the public realizes what a horrible waste of resources that wind energy is when you start to look at the entire operation from beginning to end.  Wind energy is definitely not RENEWABLE.  And, even worse... the wind turbines are not lasting as long as the 20-25 years forecasted by the industry.  A study that came out in 2012 by Gordon Hughes, researching the relatively mature Dutch and U.K. Wind Industry, suggested that only a few of the wind farms would be operating for more than 12-15 years.

Wind & Solar A Disaster On The Electric Grid

The one thing not mentioned by the "Renewable Energy Aficionados" is that the more solar and wind that is added to the grid, the more volatile and problematic it becomes.  You see, the U.S. Electric Grid has been powered by BASELOAD energy from Coal, Natural Gas, and Nuclear... for the most part.  This type of energy generation is very stable, which is precisely why it's called BASELOAD ENERGY.

When wind and solar came onto the picture, the Renewable Energy Aficionados thought this "CLEAN GREEN ENERGY" was going to get rid of the dirty fossil fuel power plants.  Unfortunately, the more wind and solar that are added, the more BASELOAD energy has to be removed.  Why is that unfortunate?  Because when the wind stops blowing and the sun stops shining, then the Electric Utility Industry is forced to TURN ON the Natural Gas Power Plants to make up the difference.

And let me tell you, this is becoming much more of a big problem when the wind energy that was generating 40% of the electricity in the area totally falls off the very next day when the wind stops blowing.  I have read several articles showing examples of the extreme shut-in of wind and solar electric generation in a very short period of time.

There is so much information out there about this "Intermittency" problem, let me provide a perfect example taking place in Germany.  Germany installed one hell of a lot of wind and solar, and it is now becoming a nightmare because they are suffering from black-outs, while at the same time their citizens are paying some of the highest electricity rates in Europe. 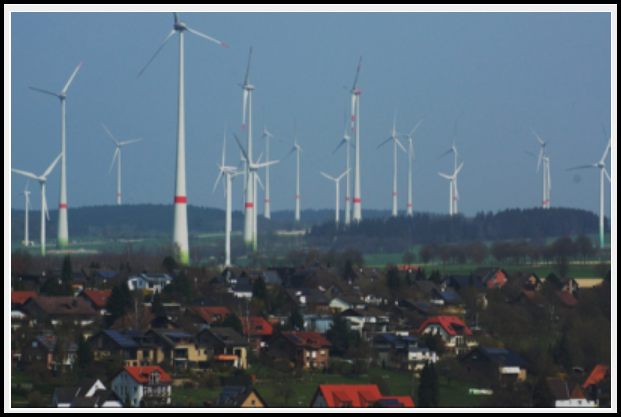 Germany’s wind and solar experiment have failed: the so-called ‘Energiewende’ (energy transition) has turned into an insanely costly debacle.

Hundreds of billions of euros have been squandered on subsidies to wind and solar, all in an effort to reduce carbon dioxide gas emissions. However, that objective has failed too: CO2 emissions continue to rise.

But you wouldn’t know it from what appears in the mainstream media. Its reticence to report on what’s actually going on in Germany probably stems from the adage about success having many fathers, and failure being an orphan. Having promoted Germany as the example of how we could all ‘transition’ to an all RE future, it’s pretty hard for them to suck it up and acknowledge that they were taken for fools.

That article above came from the website, StopTheseThings.com, which I highly recommend checking out.  They put out a lot of excellent material on the global wind industry.

For example, I found this interesting article about a wind turbine that was purchased by Akron-Westfield's School Board that went operational in 1999.  The wind turbine was supposed to provide the School District with approximately (2) teachers' salaries worth of revenue once the loan was paid off after ten years.  According to the article from StopTheseThings.com, Turbine Trouble: School Board’s Wind Turbine ‘Investment’ Ends in Financial Disaster:

After a decade of dashed financial hopes, mechanical failures and punishingly costly repairs, the school has been left to lick its wounds and lament. The experience to date has been a total financial failure. And now comes the whopping cleanup bill to have the nightmare removed, for good.

What will it cost to remove the Akron-Westfield’s inoperable wind turbine from its site?

According to A-W School Board Member Nick Mathistad, about $220,000:

$183,000 for disassembly and disposal of the wind turbine; and
$37,000 for foundation removal/disposal, dirt fill and seeding of site.
“These are budget numbers, and the scope of work would be bid out at a later date if it comes to that,” Mathistad explained in a text to The Akron Hometowner.

I recommend reading the entire article because it is worth a GOOD LAUGH.  I believe the author of the article misunderstood and thought the town of Akron was in Ohio, but it was located in Iowa.  Once you read the article, it plays like the typical TRAIL OF TEARS as the poor school board was plagued with mechanical failures and issues that cost one hell of a lot of money and just when the wind turbine was going to be paid off after ten years, it broke down for good... LOL.

That's correct, and the wind turbine has been sitting there idle for nearly a decade... rotting away.  And now, it seems that the school board is placing the $220,000 cost to disassemble and dispose of the wind turbine in their $5.2 million bond.  Again... LOL.

I have to tell you; I am simply amazed at the level of INSANITY and STUPIDITY taking place by individuals, companies, corporations, and countries that are ramping up wind and solar energy.  They are a complete disaster and will only get worse as time goes by.

Lastly, the world should have used the energy that has been investing in wind-solar and put it into transitioning our society to a smaller footprint or DEGROWTH.  That was the smart and logical move.  However, we are taking the last bit of good fossil fuel energy and putting into Non-Recyclable "supposedly renewable" Green Technology Boondoggles that will become serious liabilities in the future as we won't have the available energy to properly disassemble and dispose of the tens of thousands of wind turbines dotting the landscape.