As the Fed and Central banks continue propping up the financial markets, many precious metals analysts advise owning gold over silver.  They say that gold is the key precious metal that will be used to reintroduce a "Sound Monetary System."  However, I believe the real winner in terms of "future value" in percentage terms will be silver, not gold.

Why?  It all comes down to ENERGY.  While I have repeated myself many times over about energy being the driver of the economy, there is a large percentage of precious metals analysts and investors that still don't "GET IT."  And even worse than that, one website that publishes my work, REMOVES the energy content from the article, while only allowing the precious metals subject matter to remain... LOL.

I am going to say this once more... IF YOU DON'T UNDERSTAND ENERGY, you will not understand the real reason to own precious metals.  For example, after my last video, Gold & Silver Investing:  The Amazing Untold Facts, one commenter stated that after they watched the information, they "WOULDN'T SELL THEIR SILVER.

This is the key.  If precious metals investors DO NOT understand the energy, they may LOSE FAITH in holding gold and silver in the sea of conflicting financial and economic information.   I continue to hear some precious metals analysts say negative things about owning silver during a recession or economic downturn.  Well, for one thing, silver did very well during very high U.S. Unemployment from 2009-2011.  When the U.S. Unemployment Rate was 4.5% in March 2007, silver was trading at $15.   However, by early 2011 when U.S. Unemployment was at 9%, silver reached $50.

Secondly, the future value or price action of silver will not act the same way as it did in the past.  Due to the massive propping up of the stock market, financial system, and economy by the Central banks, when the markets turn down... investors don't have many choices to protect wealth this time around.  Bonds won't be the safe haven as they were in the past because Bonds are nothing more than Debt Instruments. 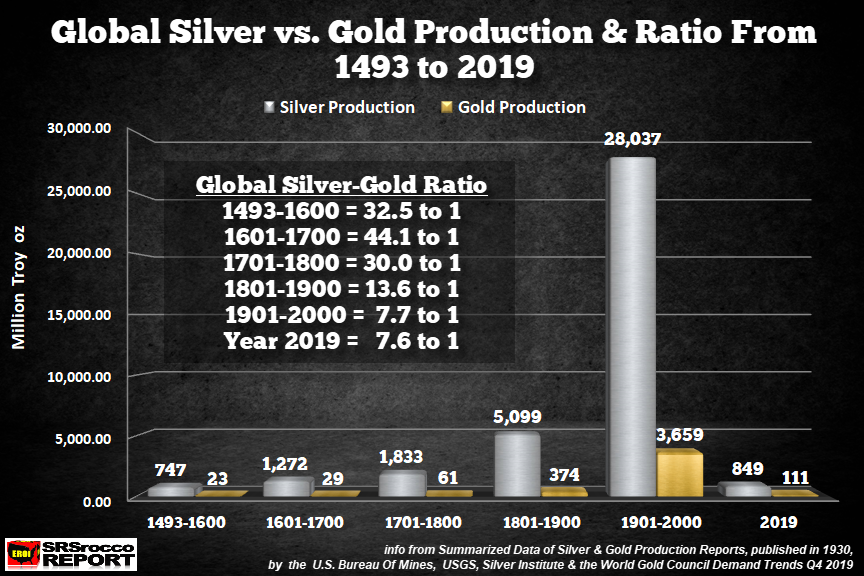 As the centuries went by, the world silver to gold production ratio declined.  From 1901 to 2000, it fell to just 7.7 to 1.  The figures in the chart above are in a million troy ounces (oz).   Now, if you don't believe ENERGY is a KEY FACTOR, take a look at the production level of silver and gold during 1901-2000.  When oil came on the market, it allowed gold and silver production to increase exponentially.

World silver production during 1901-2000 increased 5.5 times compared to the prior century, and gold surged nearly ten times.  In 2019, the world silver to gold production ratio will fall to 7.6 to 1.  Thus, the world is producing one hell of a lot less silver compared to gold than it did during the 18th and 19th centuries.

The next chart shows the world silver to gold production ratio from 2010 to 2019: 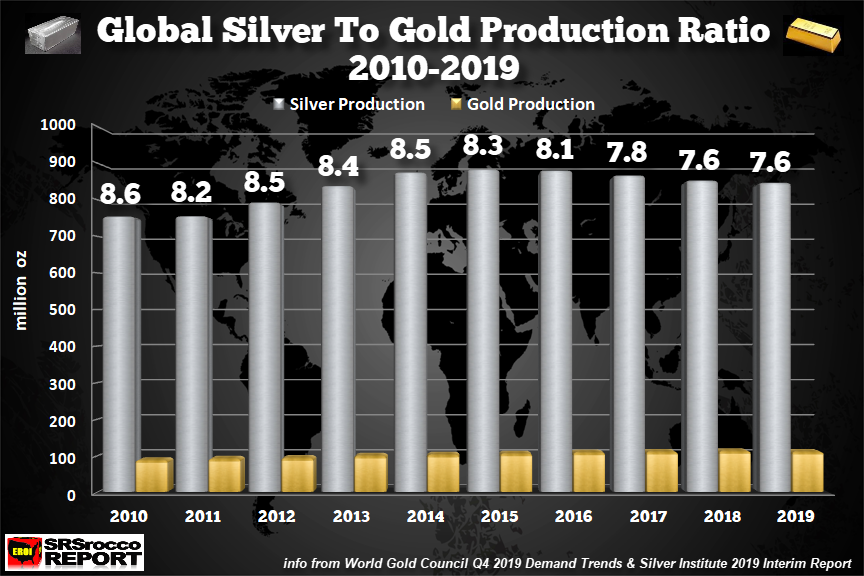 Once global silver production peaked in 2015 and declined as the gold mine supply continued to increase, the ratio fell from 8.3/1 to 7.6/1 in 2019.  This is excellent news for silver investors, whether they realize it or not.

Furthermore, a large percentage of the global silver mine supply that made its way into the market is gone forever.  Or, let's say, less likely to find its way back into the market.  Why?  Two reasons.  Because only 20% of Industrial Silver consumption is recycled back into the market, and only 9-10% of silver jewelry.  As I stated in previous articles, 90% of gold recycling comes from gold jewelry. 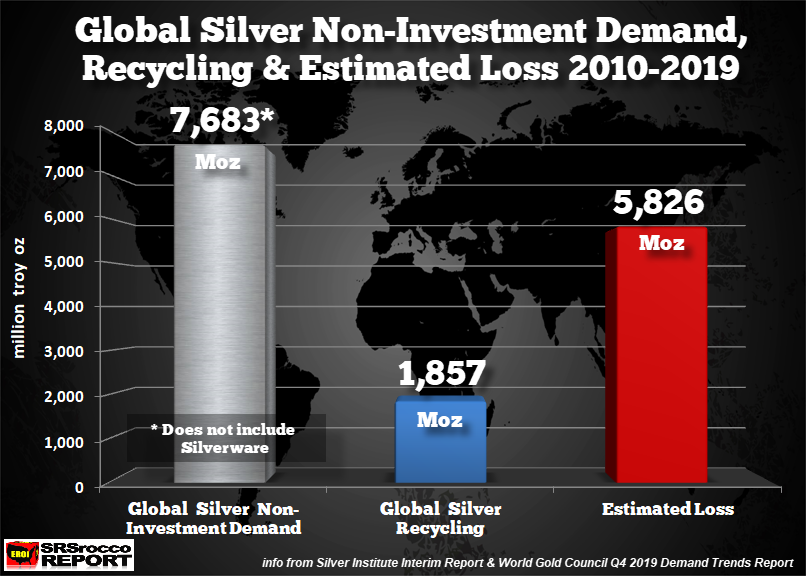 When countries removed silver from their currency, it was recycled and fed back into the market to fill the insatiable industrial demand that took off during World War 2.  The world basically ATE ITS SEED CORN of MONETARY SILVER so we could have more fancy gadgets and technology.

The last chart shows just how little above-ground silver investment stocks are remaining compared to the massive 51.5 billion oz mined since 1493.  According to the 2019 World Silver Survey and World Gold Council, there is approximately 2.5 billion oz of above-ground investment silver stocks versus 2.4 billion oz for gold: 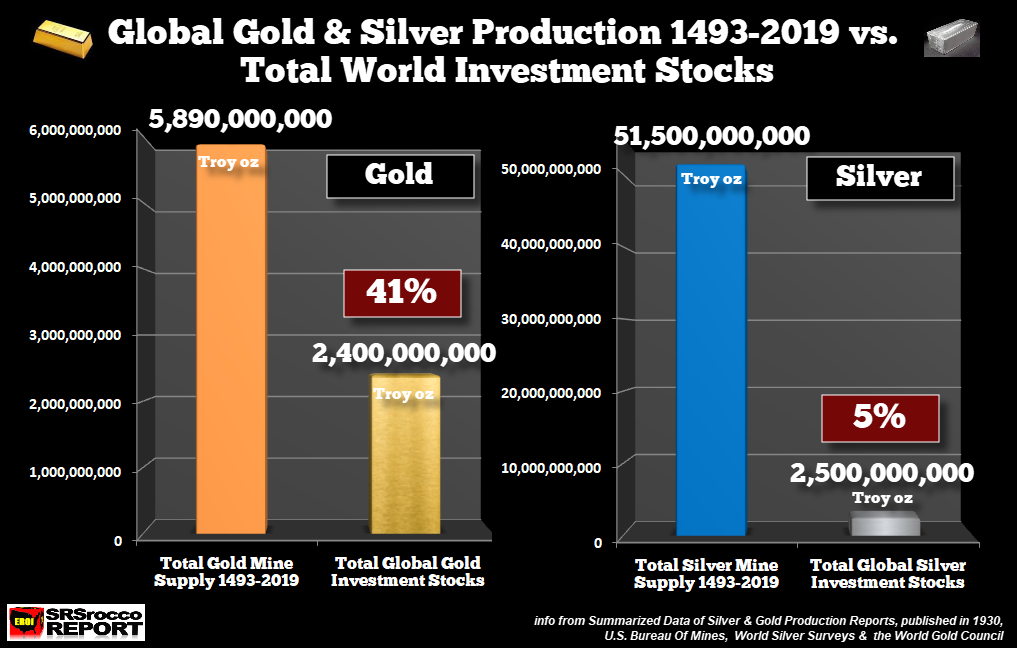 This chart should help precious metals investors understand why silver will outperform gold in the future.  There just isn't that much more above-ground investment silver stocks in the world as there are gold stocks.  Moreover, 41% of the "known" total world cumulative gold production from 1493-2019 is held in above-ground investment gold stocks compared to only 5% for silver.

Again, the world BURNED THROUGH SILVER like mad to supply our enormous industrial needs, but also to provide the market with a great deal of inexpensive silver jewelry.  Unfortunately, most silver jewelry won't be recycled, even at a $100 silver price.  If a ring contains 10 grams of silver, that's only $30 worth of silver.

Silver Investors have been given a HUGE GIFT that most don't realize.  Because the world consumed, 10's of billions of ounces of silver for industrial and jewelry fabrication, most of this will never come back to the market.  Which means, when push comes to shove, investors looking to protect wealth, won't find that much silver available to acquire... only at much higher prices.

I will be putting out more videos explaining why precious metals investors should concentrate on the ENERGY INDUSTRY and why it is a critical factor to determine the future value of most assets.  While gold is still an excellent precious metal to own, it will not fix our broken Fiat Monetary System.  The Thermodynamics of Oil Depletion is destroying the Fiat Monetary System, and there isn't anything that Governments, Corporations or Individuals can do about it.

However, you can protect your wealth with the 2,000+ year history of precious metals, especially silver.