EVERYTHING but Bullion & Commodity BUBBLE

I am going to start with something you hopefully can intuit as factual.

Flacid fiat currency values in the aggregate, remain in their greatest bubble of all time.

How do we know this?!

Because gold bullion is nowhere near what the parasitical establishment will predictably and way too early describe as being in some valuation 'bubble.'

The coming gold bubble conversation is a moot talking point until at least we clear $4,000 oz in fiat USD valued currently (see the now fiat monetary base vs claimed US Gold Reserves chart below).

In other words, gold has not taken the fiat $USD and almost none of the other +180 fiat currencies entirely to the woodshed, just yet.

Strange, given that global and US fiat currency creation has never been more reckless and speedy than perhaps the first-two- and third QEs following the 2008 financial crisis.

Wondering in writing below.

Now we wonder if JP Morgan walked away from the REPO market in revenge for their precious metals desk getting US DoJ RICO'd? 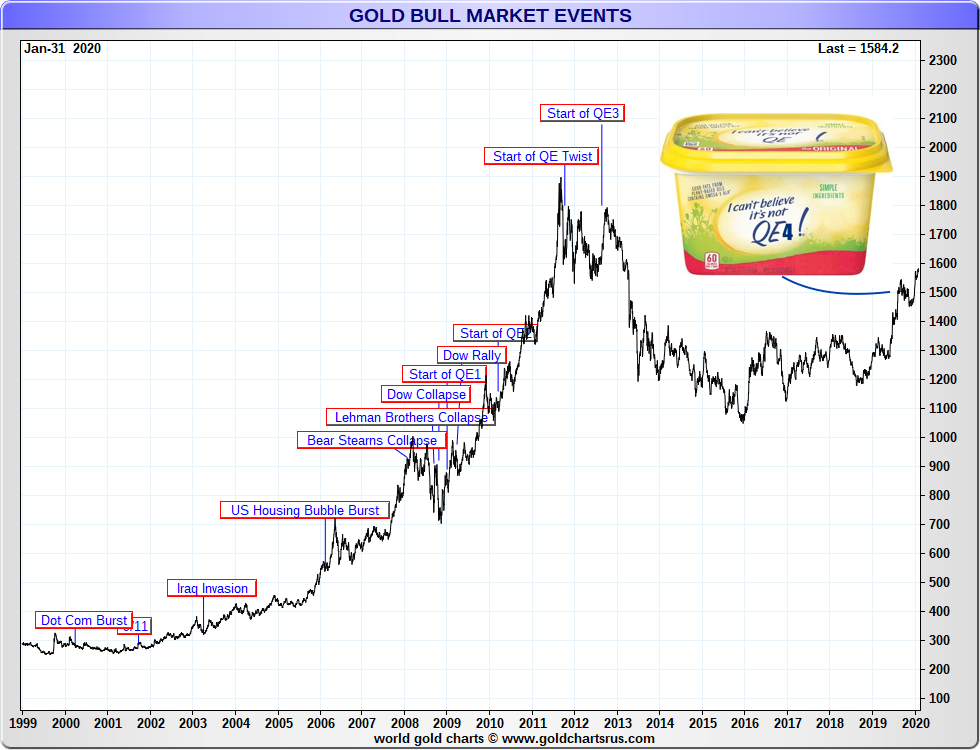 One has to go back to early 1980 precious metal bull market peak, back to when especially early 1980 gold prices were making central bank fiat currencies tell their inherent truth.

We are further still now wallowing in fiat valued delusions. Just awaiting the supposed US gold reserves to account from +40 to 100% vs. fiat Fed notes issued currently.

Here is the fiat Federal Reserve note's ongoing levitation versus all the Official Gold Reserves the USA supposedly holds at the moment. There are trillions of rationalizations for why gold will be rocketing higher in value soon. 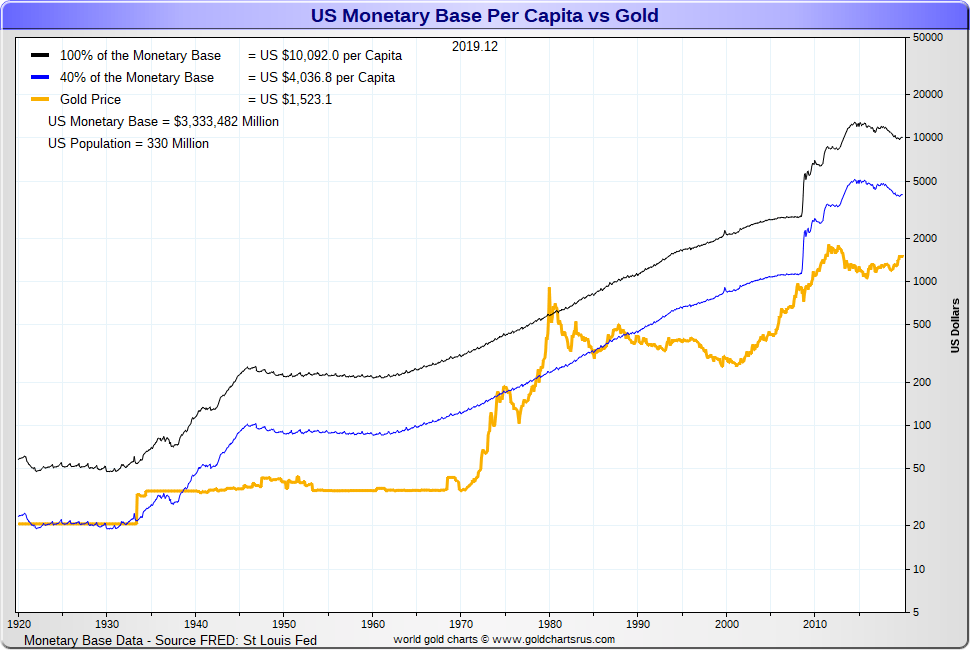 Today we will dig into the major four precious metals updates in early 2020, but first, this week’s starting bloodbath to begin.

We woke up this past Monday morning to yet another commodity beatdown thanks to both the slowing global economy and downward selling pressures due to the still spreading Corona Virus.

Most of the worst significant financial news appears to be still coming out of China currently, and since they for decades now have been consuming near half of all commodities, the Bloomberg terminal was bathed in red. 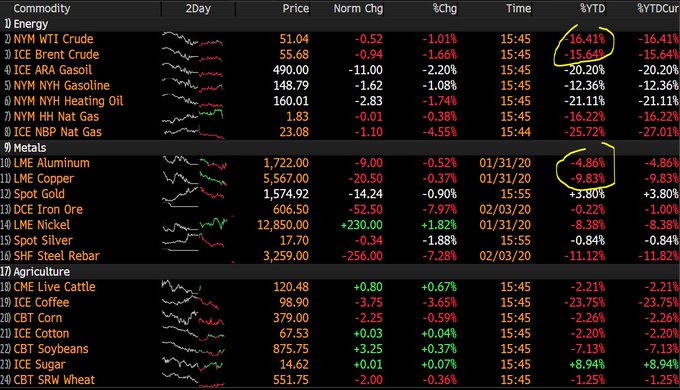 As you can see, the two historic monetary precious metal spot prices thus far in this new year 2020, have both held up quite well.

It seems currently most derivative traders understand that increased global fiat currency create-and-inject liquidity sessions will keep on coming. Spanning from China’s PBOC to the USA’s not-QE4 pumpage to an eventual Fed Balance sheet doubling, such actions will ultimately drive the fiat values for bullion higher.

But before we dig into the silver, gold, platinum, and palladium price actions.

Let’s examine perhaps the most beat down of almost commodities currently: energy.

How much longer might the major monopolistic tech stock bubble of our current era, make mainly energy look worthless?

Even measured with an over 100-year timespan, we are again at all-time low levels versus the most popular stocks of the given timeframe comprising the primary US stock market (i.e., DJIA).

WHAT ARE WE MEASURING HERE?

Often these GSCI vs. Stock chart illustrations get shared in the financial arena without context.

The GSCI components have often been comprised of over 60% energy (crude oil & natural gas). Hence you can see that spike in early 2008 above.

Most investors have no clue that stock indexes toss underperformers out to goose the nominal look of their valuations (i.e., DJIA).

And the following graphic shows how crude oil and natural gas will, too, be here for the next commodity bull market to come.

Similar is the case with precious metals valuations ongoing, and ahead.

You remember the first times you learned some of the sordid details regarding COMEX (gold, silver), the NYMEX (palladium, platinum), and London’s LBMA gold ‘transparency’ machinations?

Doing this legwork is required to have a small grasp of what has been going on between price discovery vs. physical supply-demand fundamental factors for decades now.

When a derivative traded precious metal like palladium’s physical supply goes missing, its commercial bank suppressed fiat prices must rocket higher to coax the real precious things to come to market. That is when small portions of the financially interested world get to learn how stupid and corrupted derivative price discovery for precious physical metals got them in that bind.

Often quipped in the financial space amongst commodity and precious metals analysts is the simple statement that “the cure for low prices is low prices.”

Too is also required a long duration of time without supplemental supplies easily added to the marketplace, coincided with ongoing demand undiminished or possibly rising. Think of fracking energy and oil supplies to counteract why filling up our tanks of gasoline is still reasonable in cost versus say before the 2008 financial crisis or near the 2011 silver spot price peak.

We are left here to wonder with the physical palladium drainage ongoing from the year 2013 onwards. How much longer until the other three primary precious metals start doing their very own palladium price action upside breakouts?

When and how might highly limited global platinum supplies be raided next to thrift out some of the increasing palladium usage demand to come?

We have done the data dive and research. And this claim remains true. If you are an average North American homeowner, the world’s entire physical platinum supply could likely all fit contained in one massive platinum bullion bar within your garage or living room.

Look for platinum to continue to climb slowly again and bounce beyond $1,000 ounce in fiat Federal Reserve notes in the coming months. The combination of platinum often being thrift-able for autocatalyst considering palladium’s rocketing record prices and the fact that platinum vs. gold price is currently cheaper than it has been in over 100 years.

Both these facts should help platinum ride higher to eventually return and go beyond its post-2008 rebound in fiat $USD. 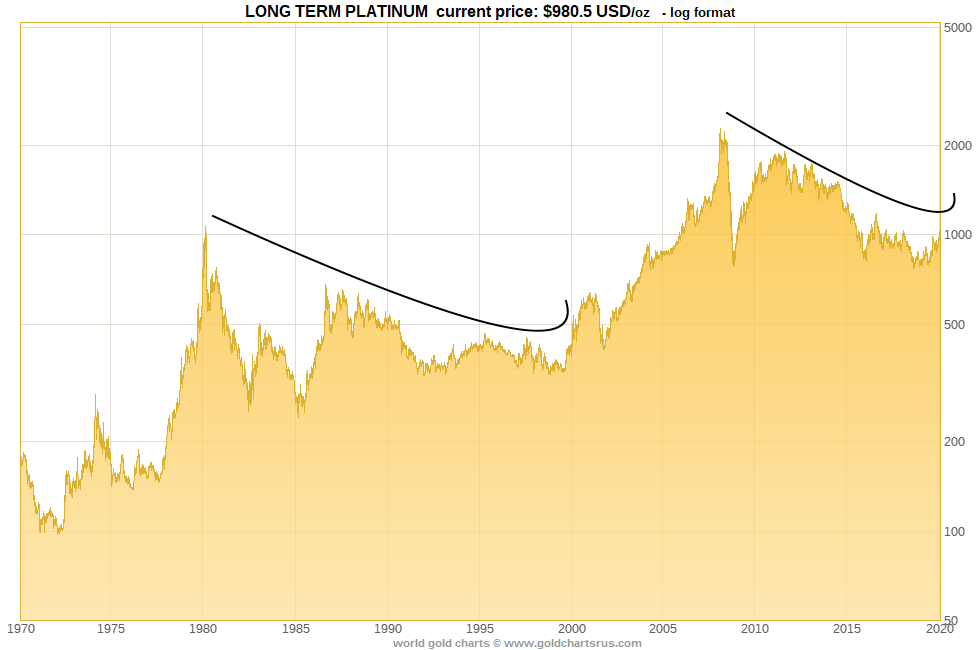 Perhaps only currently superseded by silver in terms of being a superb precious metal value bet for the medium and longer-term. Platinum remains comparatively a superb bullion buy for our longer fuel cell future. Asian platinum jewelry buyers are not going to disappear this century either; most will get wealthier as the century goes on.

As the US Department of Justice continues to weigh criminal admissions and ongoing evidence versus the alleged perhaps most all-time corrupt, JP Morgan precious metals trading desk for their supposed law-breaking actions over the last decade-plus.

It would be interesting to know whether or not JP Morgan and even its clients either allegedly front ran and or conspiring together, indeed RICO’d their COMEX silver bullion market concentration using potentially illegal trading tactics.

If for US market credibility alone, the US Treasury needs to clean up the massive negligence in our price discovery commodity exchanges over the past few decades.

We, too, suggest silver bulls stay laser-focused in on JP Morgan’s COMEX warehouse silver hoard dominance for its days are also numbered. If our recent 1990s past is future prologue, expect India and China will take and melt that record-sized JP Morgan silver warehouse pile within a similarly brief timeframe as Buffett's record-sized COMEX silver withdrawal pre-first internet bubble.

Much of the silver bullion buying world appears currently split between wanting to acquire more silver bullion; still, this cheaply valued considering the chaos of our monetary and economic policies to date.  Contrasted by another half of silver bulls too old and beaten down, waiting for much higher fair silver values and a possible mania to come.

Even a cursory look back at modern fully fiat $USD silver price highs of the past, tell us and a billionaire NY Fed advisor too, that silver has tremendous exponential upside valuation runs to come.

As we collectively and seemingly forever face economic, monetary, and fiat currency crises to come (until we structurally fix the ongoing debt and unfunded promise pile building).

It’s no wonder the aggregate fiat currency injecting central banks around the world are buying gold bullion at clips not seen since the price rigging London Gold Pool fell apart (the late 1960s).

Neither of these trends is going to stop anytime soon.

Central banks will also use covert means to try to manage the inevitable speed of gold's upside revaluations to come.

Gold's mania phase will come in handy for whipping away irresponsible record-sized promises made and never funded or saved for.

Intercepted US Treasury cables from late 1974 gold price related prove the precedent existed way back then, and too likely ongoing for those who have their heads out of sand piles looking at the facts on the ground.

^^^ Youtube's algorithm suppressed the viewcount on this CFTC truth bomb ^^^

Look for gold’s fiat US dollar price chart valuation to keep climbing its bowl-shaped wall of worry. Surpassing the old 2011 gold fiat $USD price high is a given medium to the long term. A cursory look at the major driving factors to date, illustrate this claim will be real soon, the fiat $eeds recklessly created and sown.

What we are most interested in seeing is how big money market participants react when it becomes evident that George Soros was indeed correct in saying circa 2011, that gold will be the 'ultimate bubble.'

In other words, in his elitist (I broke the BoE) speak. Gold will be the last bubble standing after this over 50-year debt cycle busts/debases, writes off, and structurally sobers back up.

At a future point in time coming, even some silver selling will make more sense than actually buying it. Of course, take those proceeds and purchase real and or attractive at the time income-producing assets with your winnings.

Now and until then, I suggest we all acquire a prudent bullion position while it still is reasonably priced and valued versus current “Everything (but commodities and bullion) Bubbles.