There's no better way to describe what is taking place in the U.S. Big three Oil Companies domestic oil and gas sector than a complete and utter financial disaster. Honestly, I am not exaggerating.  The only place ExxonMobil, Chevron, and ConocoPhillips are making decent money is in their non-U.S. or International oil and gas sector.

While it's no secret that the U.S. shale oil industry continues to be a trainwreck, the damage is now spreading deep into the financial bowels of the Big Three Oil Majors.  Unfortunately, the largest, ExxonMobil, has the worst-performing domestic oil and gas sector in the group.  So, it's no surprise that ExxonMobil was forced to borrow money just to pay dividends.  I posted this chart in my last article on ExxonMobil: 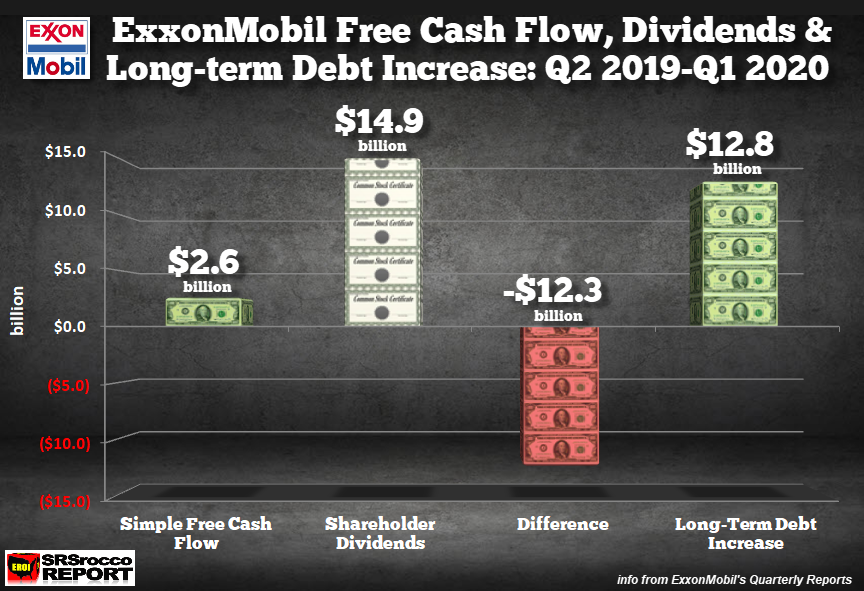 As you can see, ExxonMobil's long-term debt over the four-quarters (Q2-2019 to Q1 2020) increased nearly the same amount as the shortfall between the dividend payouts and the free cash flow.

However, if we look at the Big Three as a group, Q1 2020 wasn't pretty at all.  The next chart combines ExxonMobil, Chevron, and ConocoPhillips Upstream Earnings and Capital Expenditures (CAPEX) from their U.S. sector versus their non-U.S. or International sector.  The upstream sector refers to the company's oil and gas wells.

The Big Three suffered a net $900 million earnings loss from their U.S. upstream sector while spending a whopping $5.6 billion ($5,591 million) in CAPEX.  Now compare that to the combined non-U.S. or International upstream earnings of $4.3 billion based on investing $4.6 billion in CAPEX. 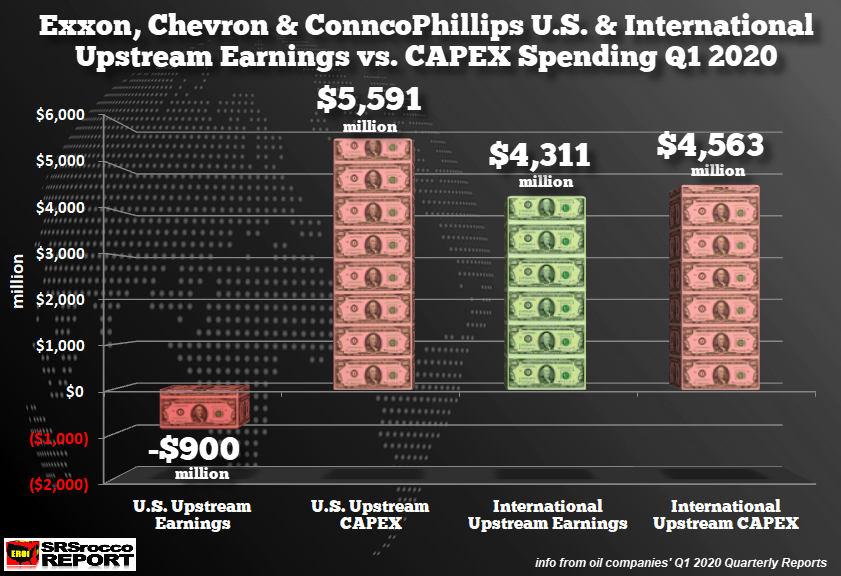 So, if investors don't look closely, they will see that these Big Three Oil Majors actually made money on their total upstream sector (oil & gas wells) during Q1 2020.  However, it all came from their non-U.S. or International sector.  It seems to me that ExxonMobil, Chevron, and ConocoPhillips would be in much better financial shape if they CUT their entire U.S. oil and gas operations altogether.

In looking at the data, if we thought Q1 2020 was bad for the Big Three Oil Majors domestic upstream sector, wait until the next quarterly report comes out at the beginning of July.  According to their financial statements, the Big Three Oil Majors received about $42 a barrel for oil during the first quarter of 2020.  Both ExxonMobil and ConocoPhillips received about $2-3 less than the average WTIC benchmark for the quarter.

With the current average WTIC (West Texas Crude Intermediate) oil price for the first six weeks of Q2 trading at $19.65 a barrel, what will the average be by the end of the quarter?  Maybe $25-$30?  If so, these companies would receive even less than that.  And, to make matters worse, the price of North Dakota Light Sweet Crude has averaged so far about $10 a barrel in the second quarter.

Shaleprofile shows that ConocoPhillips and ExxonMobil are producing about 166,000 barrels per day in the Bakken (Chevron doesn't show any oil production in the Bakken): 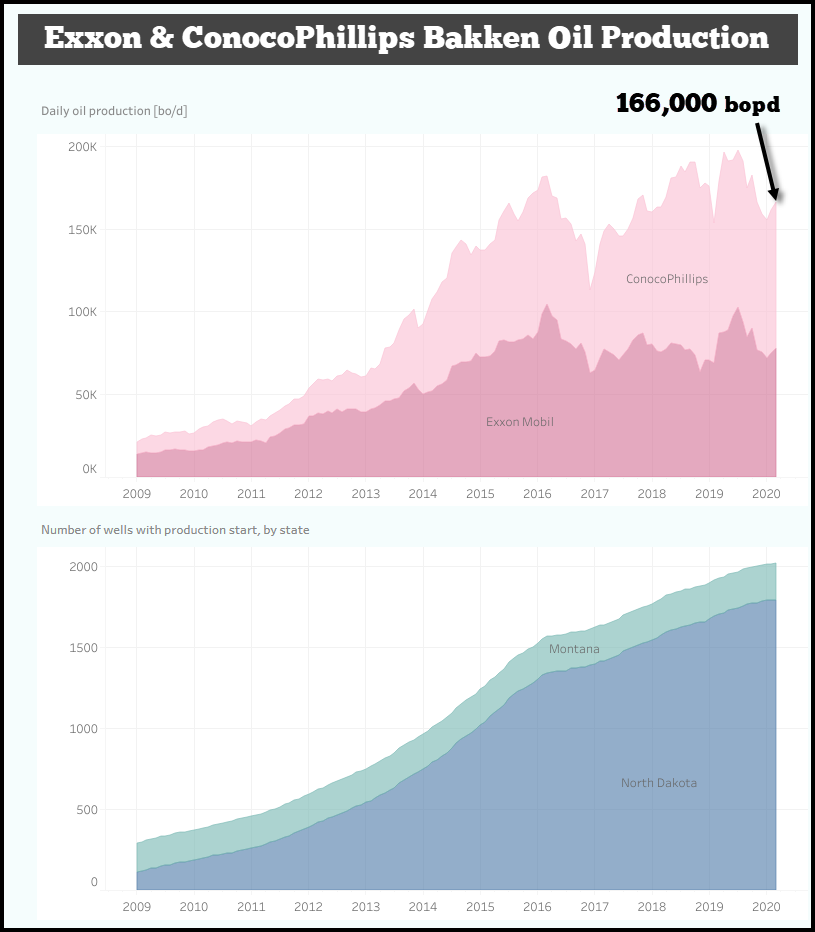 So, these two companies received about $10 a barrel for their North Dakota Bakken oil for the first half of the second quarter.  How bad will these losses add up to during Q2 2020??  GOOD GRIEF.

To give you an idea just how bad the situation is for ExxonMobil's U.S. oil and gas sector, take a look at the company's Supplementary Report: 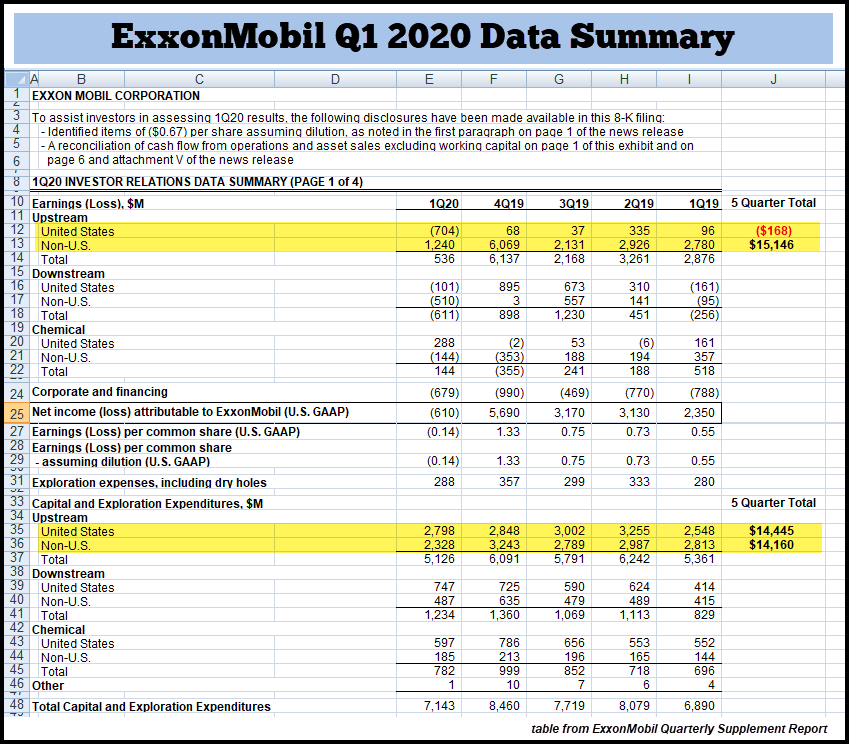 Over the past five-quarters, ExxonMobil spent a stunning $14.4 billion on its U.S. oil and gas wells while posting a $168 million earnings loss.  On the other hand, ExxonMobil's non-U.S. upstream sector reported $15.1 billion in earnings.  What a difference.

The financial data shows that the Big Three Oil Majors are struggling to make money in their U.S. domestic oil and gas sector.  Now with the U.S. and global economy heading into a depression, the financial situation for ExxonMobil, Chevron, ConocoPhillips will only get worse.

The world is finally heading over the ENERGY CLIFF, but few realize the dreadful impact this will have on the U.S. Suburban Leech & Spend Economy.