Coup 2.0; We Can Strike In Any Direction 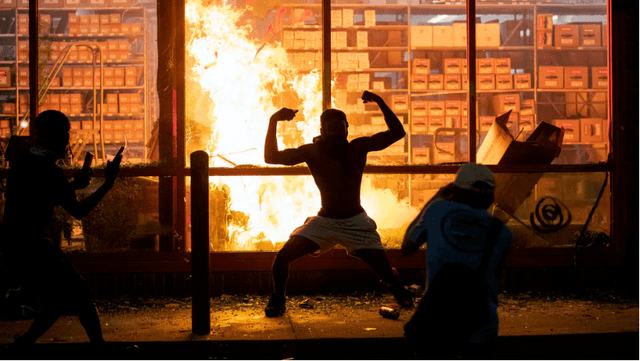 "Like a shot from a dystopian staging of Akhnaten". Carlos Gonzalez's striking photo of the August Minneapolis BLM riot.

I planned to write two posts over the weekend: one on what look like the preparations for a second coup attempt this year in the U.S. and another following up on my previous post on my system's market posture. Michael Anton made most of points I was going to make about the coup attempt, so I will link to that here and add a couple of comments and a counterpoint. Then I'll move on to the market update.

Readers may recall that Michael Anton wrote (under a pseudonym) the famous Flight 93 Election essay in 2016; he then went on to serve in the Trump administration. In the essay linked in the tweet above, Anton argues that Democrats are "laying the groundwork" for another coup attempt against Trump. The first attempt, Anton notes, was in June:

It started with the military brass quietly indicating that the troops should not follow a presidential order. They were bolstered by many former generals—including President Trump’s own first Secretary of Defense—who stated openly what the brass would only hint at. Then, as nationwide riots really got rolling in early June, the sitting Secretary of Defense himself all but publicly told the president not to invoke the Insurrection Act. His implicit message was: “Mr. President, don’t tell us to do that, because we won’t, and you know what happens after that.”

The Threat Level In June

Anton doesn't mention it in the essay, but the threat in June was apparently serious enough that the Attorney General brought in DOJ troops to protect the White House.

Anton does mention that the riots over the last few months look like,

what’s come to be known as a “color revolution,” the exact same playbook the American deep state runs in other countries whose leadership they don’t like and is currently running in Belarus. Oust a leader—even an elected one—through agitation and call it “democracy.”

The events of the last few months may be interpreted as an attempted color revolution that failed to gain enough steam, or as a trial run for the fall.

It's nice to see someone as close to the mainstream as Anton write this, but readers may remember reading about "America's Color Revolution" in June.

For a skeptical take on the coup warnings, see this Twitter thread.

The whole thread is worth reading, but this is the key point of it:

We Can Strike In Any Direction

From politics to markets: a quick follow-up to my previous post, Tortoise Formation. In that post, I analogized Portfolio Armor's response to Thursday's market action to an ancient defensive tactic:

In ancient warfare, when hoplites faced an onslaught of arrows, they sometimes sought shelter under each other's shields in the tortoise formation. You can see a live action enactment of this in the scene from the 2004 film Troy below.

In that post, I noted that our system's top names don't usually turnover much on daily or a weekly basis, but Thursday marked an exception. Our gauge of options market sentiment took us from these tech-heavy names on August 27th, 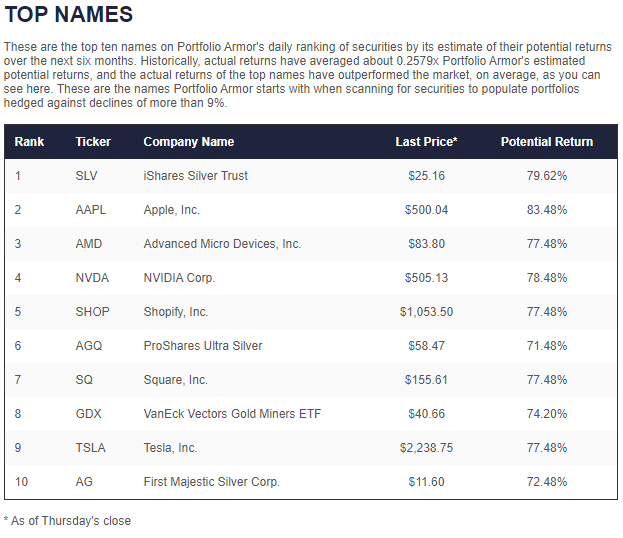 To this "tortoise formation" on September 3rd: 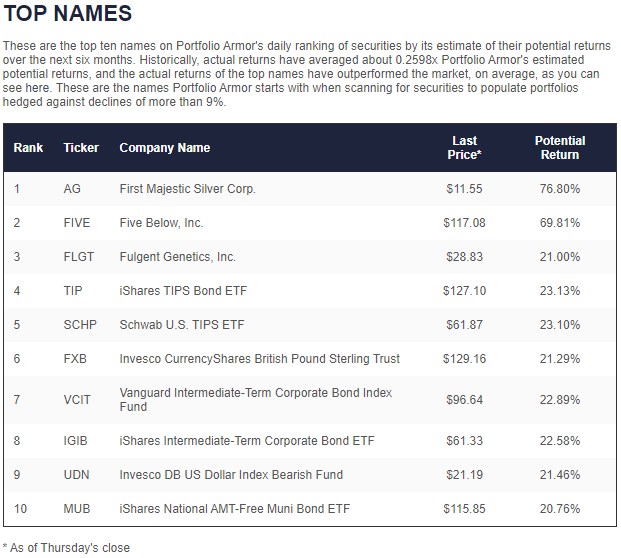 Out were the tech names and in were stodgy inflation-protected fixed income ETFs like TIP and SCHP.

Breaking Out Of The Tortoise Formation

I ended my Tortoise Formation post by noting that our system could strike in any direction:

If you watched the scene from Troy we linked to above, you know Achilles (Brad Pitt) and his myrmidons didn't stay in the tortoise formation long. They saw an opportunity and went back on offense. I expect Portfolio Armor will do the same soon. With what, we'll see. Every security with options traded on it in the U.S. - stocks, ETFs, inverse ETFs, ETNs - is a potential spear. We can strike in any direction.

Here's where it struck after Friday's market action: 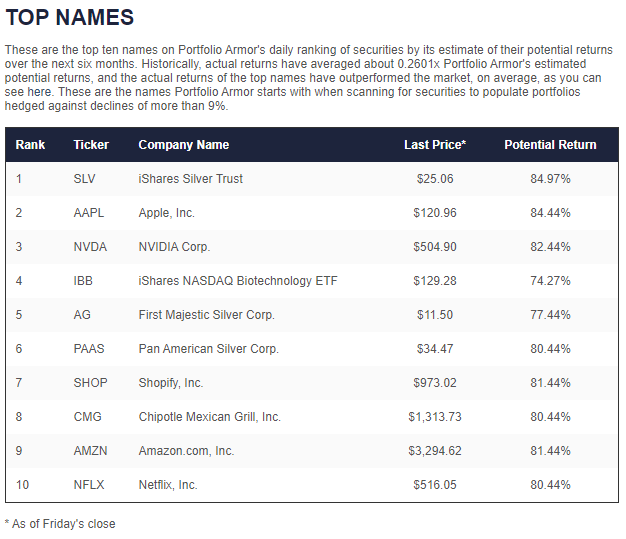 Out were the fixed income names, and back in were tech names like Apple (AAPL), Amazon (AMZN), Nvidia (NVDA), and Shopify (SHOP). One constant across all the top names cohorts above has been silver names, such as SLV and First Majestic (AG) above.

Hold Onto Your Shields

Given all the political and economic uncertainty, hedging is prudent now. I'll close with this video showing a couple of ways you can hedge one our current top names, Shopify: