Although this news is already a week old, it is critical in that it confirms what I and many others have expected: Fiscal and monetary stimulus on steroids is coming, and it’ll be GLOBAL.

The IMF released a video last week in which its Managing Director, Kristalina Georgieva (‘KG’), calls for a “A New Bretton Woods Moment” and a “Global Monetary Renegotiation.” You can watch it on the IMF’s website here: 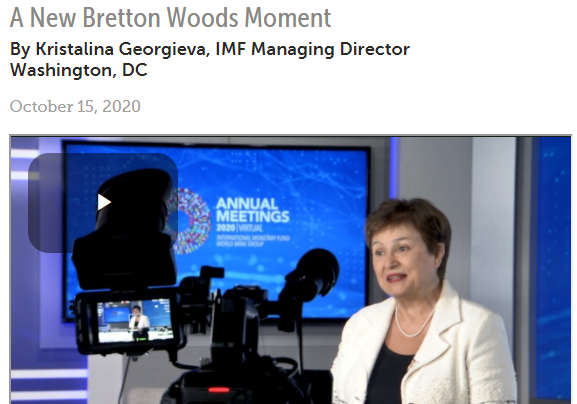 There’s a lot of information in this video, but I am going to focus on the financial aspects. The remarks that follow are my interpretation of what is being said. Watch the video yourself to make up your own mind.

In it, KG describes the economic fallout from the pandemic and the measures applied globally. She also states that:

“While the global banking system entered the crisis with high capital and liquidity buffers, there is a weak tail of banks in many in emerging markets.”

This indicates the risk of a global banking crisis led first by banks in developing countries. Global banks are all intertwined these days via debt, swaps, and other derivatives. As we saw in the U.S. and around the world in 2008, the risk is ‘the domino effect’: a bank in one country, which has loans and derivatives outstanding with multiple other banks globally, collapses and takes down several of those other banks in the process. Then the domino effect spreads just like a virus and the entire banking system risks collapse. How does the IMF plan to address this?

“We must take measures to prevent the build-up of financial risks over the medium term.”

This doesn’t sound very promising to me. The lack of any detail whatsoever to prevent such a global banking crisis suggests to me that this could happen. If so, who remains standing after the dust settles? Where do we hold our money? At the central banks? Of course, this assumes we have any money left over. The introduction of central bank digital currencies and individual accounts at the Fed and other central banks around the world also suggests where this is going: centralization of all financial transactions of any size in one location, the central bank.

But I digress. Such banking crises are typically synonymous with market meltdowns and recessions or depressions. Think 2008 and the 1930s. Will the central banks ride to the rescue again? Perhaps, perhaps not. If they don’t, the one good thing about this is that you’re unlikely to see bail-ins or bailouts. Your deposits will be transferred to a central bank account, either whole or, worst case, in part—i.e., with a haircut. The downside would be that the central bank would have total control over your deposits and likely your debts too. They can also see anything and everything you earn and spend your money on. You will likely not have to file a tax return ever again. This would also enable digitized universal basic income. The central banks could simply deposit the money in your account with them. In order to boost spending, the money could have a time limit on it and limits on what you can spend it on. You could be required to spend your digital check in the mail within 30 days or lose it, and it can only be spent on A, B, or C. This forces everyone to spend the money they receive and boosts spending dramatically, which in turn boosts nominal GDP and reduces the Debt:GDP ratio of nations and the world at large. Debt doesn’t change, but inflation reduces it in real terms. I have given a hint of how all this applies to precious metals, but I’ll address that further below. Let’s discuss another key aspect of KG’s presentation.

“Today we face a new Bretton Woods ‘moment.’ A pandemic that has already cost more than a million lives. An economic calamity that will make the world economy 4.4 % smaller this year and strip an estimated $11 trillion of output by next year. And untold human desperation in the face of huge disruption and rising poverty for the first time in decades.”

“We have seen global fiscal actions of $12 trillion. Major central banks have expanded balance sheets by $7.5 trillion. These synchronized measures have prevented the destructive macro-financial feedback we saw in previous crises.”

“Support remains essential for some time—withdrawing it too early risks grave and unwarranted economic harm.”

“Strong medium-term frameworks for monetary, fiscal and financial policies, as well as reforms to boost trade, competitiveness and productivity can help create confidence for policy action now while building much-needed resilience for the future.”

(By the way, stating “medium-term” over and over indicates that this is all not coming tomorrow, but it’s not far away in the long-term either.)

(Debt which will have to financed by the central banks.)

“Our research shows that, with the right mix of green investment and higher carbon prices, we can steer toward zero emissions by 2050 and help create millions of new jobs.”

The IMF just confirmed that governments worldwide will be “significantly” increasing debt to fund numerous spending initiatives to address the ongoing economic and health crisis and spur growth in the future. More spending means more debt, which means more money-printing as the central banks step in to buy it and keep bond yields down.

Finally, what this means for gold and silver. It is clear to me that global authorities, including central banks, will prove my 2017 prediction correct: We are going to get “fiscal and monetary insanity on steroids.” Massive government spending, universal free money to spend inside a week or month (or lose it), possibly deeply negative interest rates on deposits. What does this do to the currencies of the world as the amount of goods produced and services provided fall? They fall, not against each other, but in real terms. In other words, the risk is hyperstagflation. Tangible assets that are undervalued, such as gold and silver, cannot be printed into oblivion and therefore, as the real value of currencies fall, precious metals will rise against them all, probably in spectacular fashion, just as in the 1970s stagflation. But the dollar will likely suffer the most. Why? Because the dollar is the global reserve currency, and therefore it has the most to lose, specifically its global reserve status. Is that part of this “Bretton Woods Moment”? It could be, whether the U.S. agrees to it or not. An eerily similar scenario is laid out in the ‘fictional’ book, The Mandibles, which I highly recommend you read, especially given the potential consequences for the U.S. and the world.

In conclusion, the short-term outlook for precious metals and miners remain cloudy, but beyond that, the prospects are incredibly favorable for far, far higher prices. The unfortunate part, to put it mildly, is that this is as a result of a global chaos… and what that means for everyone in the future.