The FDA has a serious chip on its shoulder regarding the approval process, and its mandate to protect the public by ensuring the safety, efficacy, and security of drugs.  There is clear evidence that its edicts are actually harming the American population, especially with its overreach into the Expanded Access program which allows doctors to choose experimental drugs for their patients.  Leronlimab, a drug developed by CytoDyn, is a perfect example of a very safe and efficacious HIV drug that was repurposed for COVID-19.  It demonstrated its utility in May 2020.  Even though it had 60 emergency INDs (eINDs) more than any drug at the time including remdesivir, the FDA closed it down citing that the high number of eIND’s was hurting enrollment in existing clinical trials.  The manuscript by Dr. Otto Yang is the smoking gun evidence that leronlimab worked very early in the pandemic and for some unexplained reason was passed over by the administration.  In the manuscript readers will find a 17.4% mortality rate during a time where the mortality rate trended between 60 - 80% in this very critical patient population.  The FDA’s rationale for the closure of the eINDs was that it was hurting enrollment in the existing clinical trials.  Since May doctors who saw the drug worked have had no access to it nor did the ban boost enrollment..

“I am committed to releasing safe and potentially helpful treatments for COVID-19 as quickly as possible in order to save lives.” 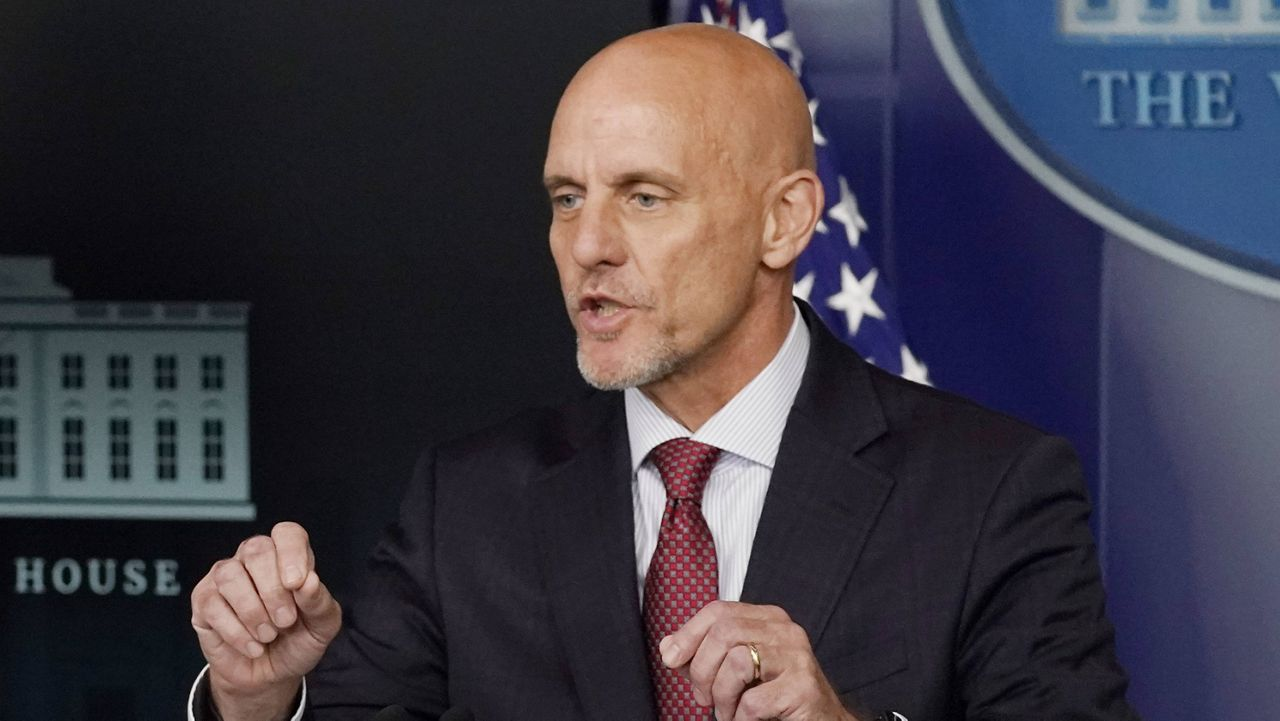 He must have meant every drug developed by big pharma.  Leronlimab made by small pharmaceutical maker CytoDyn demonstrated that it was potentially helpful back in May with its 60+ eINDs and here it sits, two successful clinical trials later - waiting.  The severe to critical COVID-19 trial finished enrollment of its 390 patients and  is expected to read out in the next 3-4 weeks.  The independent Drug Safety Monitoring Committee (DSMC) reported that leronlimab is expected to meet its primary endpoint which is a mortality benefit. 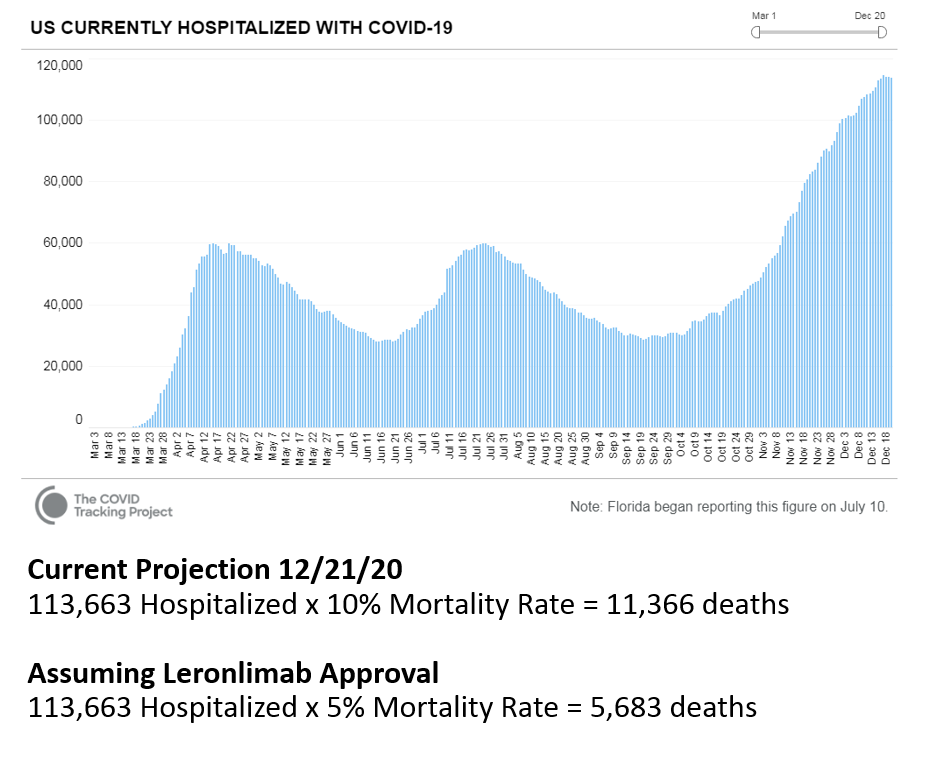 Putting a value on a human life is nearly impossible, but values can be placed on lowering the number of hospitalizations and reducing the amount of money.  Many pundits in the media like Jim Cramer have said that the key to controlling this pandemic is to get people out of the hospital and “take dying off the table.”  The average length of stay is a big variable in the cost of COVID-19 hospitalizations and then it varies by age and comorbidities.  According to Healthcare Finance the average cost of a stay is well over $50,000.

The costs of care spirals higher as the length of stay increases.  What is utterly amazing is that leronlimab in clinical trials demonstrated a 60% reduction in SAE’s which means by not taking the drug is less safe than doing nothing!  Dr. Jay Lalezari, interim CMO of CytoDyn commented earlier in the year that he had never seen a drug do that in his 30 years of clinical practice.

When taken early, leronlimab could have a massive impact on reducing the hospital stays which translates into big money saved.  The results of CytoDyn’s mild to moderate clinical trial showed a reduction in the National Early Warning Score (NEWS2) which identifies patients at risk of hospitalization.

“In all treated patients, at the End of Treatment (or Day 14), patients in the leronlimab group were more than twice as likely to experience a beneficial improvement in scores compared to patients in the placebo group (50% vs 20%; p=0.0223).  Similar, statistically significant, results were observed at Day 3 and Day 14 in the analysis of per protocol population (p<0.03 and p<0.02, respectively).”

This is a fancy way of saying leronlimab can cut the number of hospitalizations in the United States by half if given early.  There's only one problem: Operation Warp Speed (OWS) didn’t identify this drug as having value early enough so there just isn’t enough drug to go around.  Even though there was statistical significance in the Phase 2 study the FDA did not issue an EUA because they believe the proper target group is the severe to critical population.  The FDA indicated they should not apply for the EUA because the only likely approval would be in the severe to critical patient population.  Since FDA approval would have led to less hospitalizations, this is another very specific example of how these FDA edicts harm the American people.

The approval process is primarily to keep unsafe products off the market but it comes at a considerable cost in terms of delaying life saving drugs.  Luckily there was a mechanism in place to quickly approve drugs in a time of pandemic called Emergency Use Authorization (EUA).  The real question is how effective has this program been administered.  There are 4242 clinical trials on COVID-19 from vaccines to therapeutics to medical devices and remdesivir was the only therapeutic EUA for six months.  The list has grown by 6 more EUA’s out of the 4242 clinical trials but 2 are vaccines.

Emphasis on Vaccines over Therapeutics

The focus of the government has been on vaccines and big pharma.  Over $10 billion was spent on OWS and almost all but $500 million went to vaccines.  All the money went to big pharma because the prevailing thought was little pharma didn't have the resources to come up with anything good.  The US Government basically gave up on therapeutics very early and decreed vaccines were the path forward.  There was no creativity or critical thinking involved in the decision because critics were screaming you have to get people out of the hospitals.  A drug like leronlimab early on in the pandemic proved its worth getting many people out of the hospital in days versus weeks, but the FDA dismissed anything that wasn’t from big pharma.

With all the incredible praise given to the vaccines, no one seems to be talking about its flaws. Starting off with patient compliance, two shots is much harder to administer than just one shot.  The approved vaccines are not sterilizing vaccines and can still allow the transmission of the disease from person to person.  No evidence shows that they can stop people from being hospitalized should they get sick.  What is alarming many Americans is that the death rate is so much higher than the flu.  Jim Cramer said it best when he said “we have to take dying off the table.”  Vaccines are not the answer.  Therapeutics like leronlimab are needed to take dying off the table.

Many Americans thought vaccines were going to stop the spread of the disease and then realized that even those vaccinated will need to wear a mask.  The virus is going to be pervasive unless there is a better way to stop the contagion.  A new idea floating is called Post Infection Immunization which is supposed to quickly eliminate the virus and stop the transition of it while building up the long term immunity in the body known as IgG.

Having a system that is inefficient like the FDA approval process is a small price of democracy.  Making mistakes in how to deal with the pandemic is a reflection upon leadership.  Spending billions of dollars on big pharma is just politics.  However, taking away the toolbox of a frontline doctor is unconscionable and exactly what the FDA did in the case of leronlimab.  They crossed the line.

The clinical trial for severe to critical COVID-19 completed its enrollment and is awaiting a topline readout within the next 4 - 6 weeks.  There is no justification for the FDA to prohibit eIND’s from moving forward during the next 4 - 6 weeks before leronlimab gets either an EUA or full approval.  The FDA should immediately start accepting eIND’s for leronlimab.  It's safe and there is no downside to taking it.  What's more is that every doctor that has treated patients with the drug wants to continue using it.  But right now, they can’t.  There is not a single doctor in America that can prescribe the drug to a new patient now.  Why is the FDA taking the decision making power away from experienced practitioners on the front lines that can see what is working and not working?  The FDA should reverse its decision regarding eIND submissions.  Leronlimab could save many lives right now!

As Jim Cramer said, we need to take death off the table.  Leronlimab appears to do that.  Why would anyone in a position of power not advocate returning to a state of normalcy.  This is a therapeutic expected to greatly reduce mortality.  So far the FDA has not approved a single new drug that reduces mortality. It's time for a change.  It's time to bring leronlimab out of the dark and front and center into the conversation.