"Show me the Structure of a Market and I will tell you who benefits from that structure. Show me that and I will show you how that market is gamed"

Arthur Levitt once said "The tension between centrality, on the one hand, and competition, on the other, is probably the oldest of all market structure issues". What he did not say is that the tension is all but gone in a neokeynesian marketplace as incumbents seek to centralize more and more despite the lack of market diversity. For them, all eggs must be in an even smaller basket. And once that happens, they must exert even more control on that basket to help us. This is what Bitcoin undermined, their rationale for centralized trust. That is why Government must crush or co-opt it.

Here is the press release that forced me to pay attention again:

OFFICE OF COMPTROLLER OF CURRENCY RELEASE

WASHINGTON—The Office of the Comptroller of the Currency (OCC) today published a letter clarifying national banks’ and federal savings associations’ authority to participate in independent node verification networks (INVN) and use stablecoins to conduct payment activities and other bank-permissible functions.

“While governments in other countries have built real-time payments systems, the United States has relied on our innovation sector to deliver real-time payments technologies. Some of those technologies are built and managed by bank consortia and some are based on independent node verification networks such as blockchains,” said Acting Comptroller of the Currency Brian P. Brooks. “The President’s Working Group on Financial Markets recently articulated a strong framework for ushering in an era of stablecoin-based financial infrastructure, identifying important risks while allowing those risks to be managed in a technology-agnostic way. Our letter removes any legal uncertainty about the authority of banks to connect to blockchains as validator nodes and thereby transact stablecoin payments on behalf of customers who are increasingly demanding the speed, efficiency, interoperability, and low cost associated with these products.”

Seems OK on the face of it right? Not so fast

Oh and also, there is FinCen putting up kyc walls for crypto effectively de-platforming it as US currency asset.

For example, under this Proposal — if a Square customer’s mother gifts her daughter $4,000 in physical cash and the daughter deposits those funds in a bank, the bank would have no obligation to collect information on the customer’s mother. Under the Proposal, if this same transaction were completed in cryptocurrency, the bank would have to reach beyond its customer relationship and intrude upon the mother’s private information in order for the daughter to successfully deposit and freely access her gift

Throttle what you cannot regulate is the way.

This post below was written in 2017 (new emphasis added) around the time that the Bitcoin future contract was created. It was written in reaction to the sense we felt that governments were beginning to mobilize their authority to keep the monetary revolution from getting out of control. Some of it is naive for sure. But the macro path forward for Bitcoin and DeFi is now firmly on the Fed radar. Banks will market it to the public while the Government will seek to ring fence the liquidity for reg purposes. The press will do its part to demonize non compliant outsiders.  The market is being gamed.

The mask is being put on the Crypto market. If you do not wear a mask you will eventually be branded evil. Individual HODLers will actually be cited as reason for market volatility. Absurd as this is, it will work and banks will push for more centralization of power to "help us". Politicians will assent to what their bosses tell them. It started with BTC futures. it will end in tears for a generation. So trade it, own it, but do not think Bitcoin is a cure for avarice.

The Fed is the Market, Bitcoin Will Be Tamed

This editorial was written  November 30, 2017 in reaction to reading the Zerohedge post

The thing that will eventually dethrone the US govt as market backstop may not come as many see it coming including myself : via a fundamental reckoning or a credit downgrade. No, those things may be resultant of an outside disruptive force on the very nature of centralized power.

It may come like it does in most markets; when the big fish has a position that leaves it too little room to maneuver ( debt service etc) and then a bigger fish comes along that can take advantage of the next thing. That fish could be Russia, China, or a state controlled capitalist set up that can mandate controls more easily to what it wants. Meanwhile the west’s pesky democracy, or what’s left of it will need to be eradicated. Then they can put down any egalitarian  economic forces.

So in the west, with corporate controlled governments, the king will be dethroned only by true economic grass roots revolution. And that will only happen if they do not put it down before hand.

Either way the killer concept that will be used is the same thing that has disrupted how we communicate, fight wars, and handle work. That is decentralization as the ultimate disruptor of coalesced incumbent power. The playing field will be leveled. 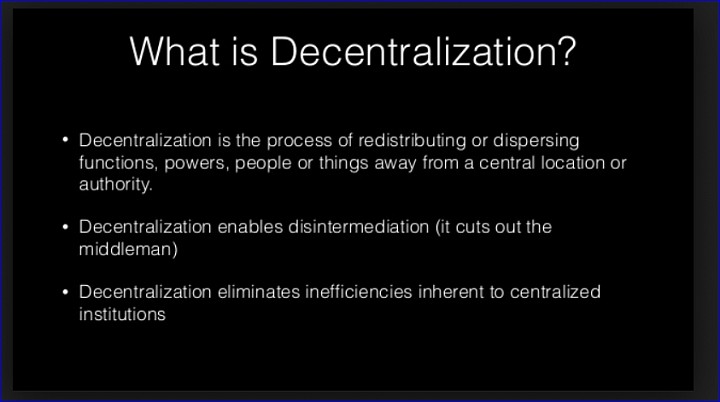 That is what BTC and it’s ilk are. They represent the re- democratization of money. This will open up the markets to a bigger, dare we say it, more fair and definitely more like the real invisible hand that free economic markets aspire to.

The question is how will the incumbent central bankers handle it. It certainly won’t be to our benefit. I write as if the success of a truly free economic society are a given. But they are not.

Control of money is being threatened by a grass roots movement. State Run capitalism will just ban or claim the new tool as its own. China and Russia are already doing oil for gold deals via Blockchain. And why not? They own their banks. The western governments will try to co-opt, restrict, demonize, and finally replace the money of choice with a castrated version that offers convenience at the price of losing that rediscovered financial freedom. Those in power have no incentive to say “we are wrong, we accede to the public’s desire for an evolutionary government.”

This will end badly when the Fed gets its shit together.

When that happens, expect a multi-year smack down attempt as they’ve seek to tame crypto currencies they can’t own. And  when you think it is over, that is when it is just beginning. The tech ain’t going away. But if there is one thing that will make enemy governments unite in defense, it will be the true democratic society that can happen. It won’t be martians that bring governments together. It will be it’s own citizens chafing at modern feudalism.

About the Author: Vince Lanci has 27 years’ experience trading Commodity Derivatives. Retired from active trading in 2008, Vince now manages personal investments through his Echobay entity. He advises natural resource firms on market risk. He pioneered and executed the Nat Gas EOO arbitrage trade of 2006 to 2008, netting over $90MM for a NYC hedge fund before retiring. Over the years, his expertise and testimony have been requested in energy, precious metals, and derivative fraud cases. Lanci is known for his passion in identifying unfairness in market structure and uneven playing fields. He is a frequent contributor to Zerohedge and Marketslant on such topics. Vince contributes to Bloomberg and Reuters finance articles as well. He continues to lead the Soren K. Group of writers on Marketslant.