Where Next for Silver?

Did you know? Get all the Sprott Money Weekly Wrap Ups, Ask The Expert,

Silver completed a blow-off top on February 1 at a higher high of 30.35. At the very least, this was a great learning experience for many people, especially those new to the precious metals space. It certainly put Silver front and center in the financial news, which is where it belongs given what’s coming, and for that I am grateful.

As most of my followers know, I use a data-based process that incorporates multiple tools and data points to try to determine when the markets will turn. It enables me to remain objective and avoid getting emotional if something shoots higher or dumps. I use it in the short-term for trading purposes and from a big picture perspective for swing trading and investing long-term. It has served me well, not least triggering my decision to start buying precious metals in the second half of 2015.

I developed my process by just looking back at all the major peaks and troughs in the market for each individual asset and identifying which signals consistently indicated a peak or trough was coming. Those signals vary in terms of importance based on the asset in question. Positioning has a bigger impact on Natural Gas, whereas sentiment is far more important to precious metals. Ultimately, I identify the key signals to watch for each asset and patiently wait for the extremes that will signal a peak or trough is about to occur. I do not have a crystal ball, it isn’t an exact science, but it does increase the probability of being right, and it certainly aids in protecting profits and reducing losses. Its best function is to eliminate emotion, the nemesis of most portfolios.

I said this was a learning experience, and here’s why. These are some of the signals I saw and tweeted about that suggested Silver was heading into a major peak with a sharp decline to follow…

Sentiment is the ultimate contrarian indicator in precious metals. It works consistently as peaks and troughs. It was extremely bullish. More than 80% of retail traders were bullish. In fact, the last time the market was this bullish was on August 7, 2020, the last peak in Silver. This was an obvious indication that the market could imminently hit a ceiling but taken alone it is somewhat unreliable. Markets can remain extremely bullish for quite some time.

From a technical analysis perspective, negative divergences had also become clear on the daily and weekly charts in Silver and SILJ, the silver miners’ ETF. Silver was also extreme overbought, with the RSI above 70. I tweeted about this on the morning of February 1. Negative divergences occur when the price hits a higher high but the momentum indicators like the RSI and MACDs do not. This can signal an imminent peak also, especially in combination with other signals. 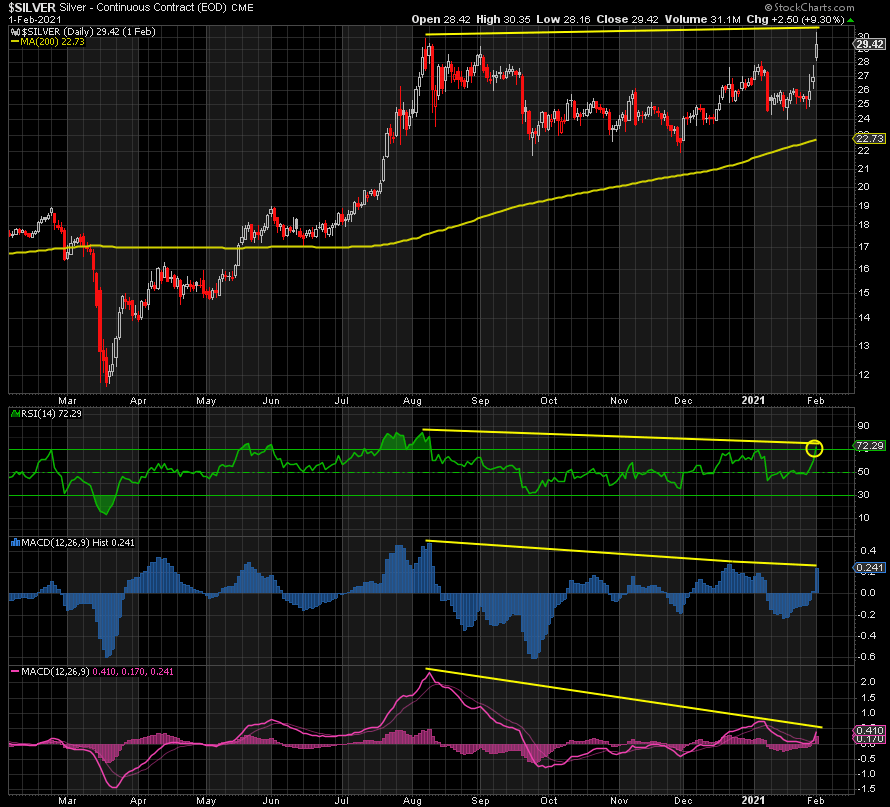 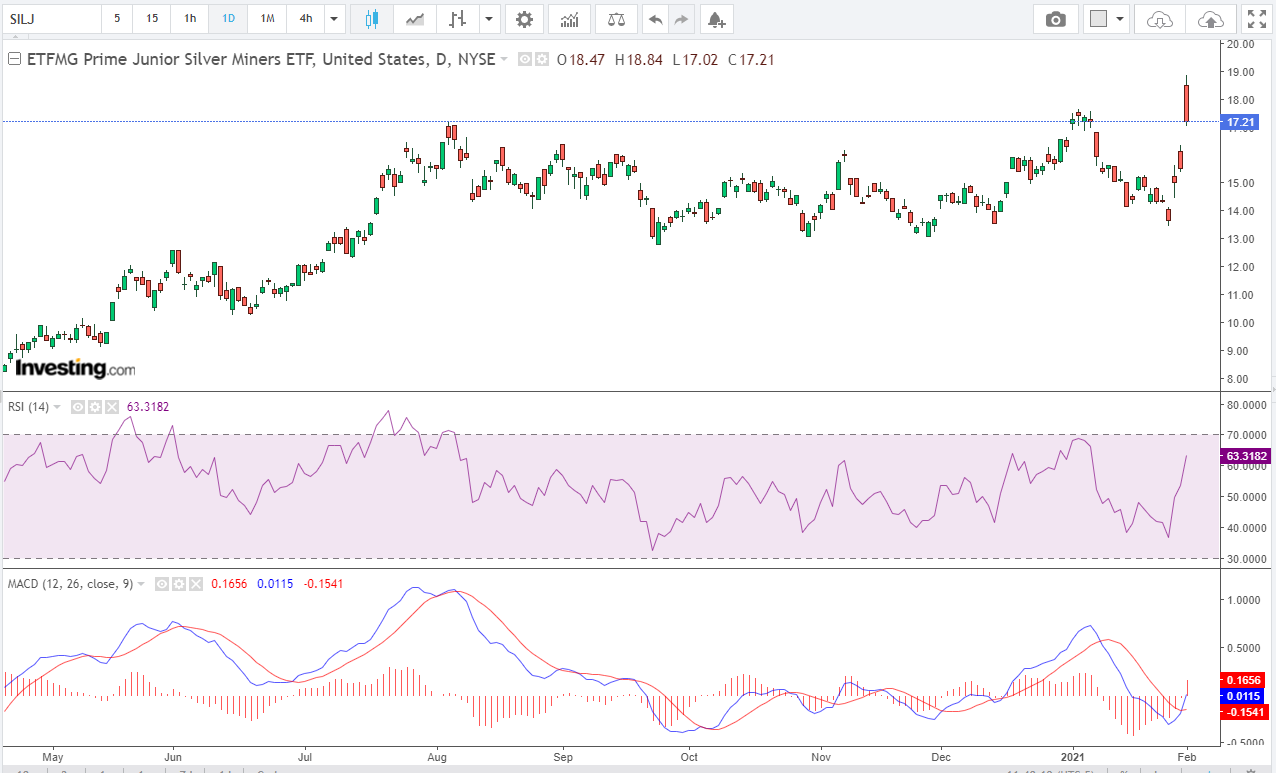 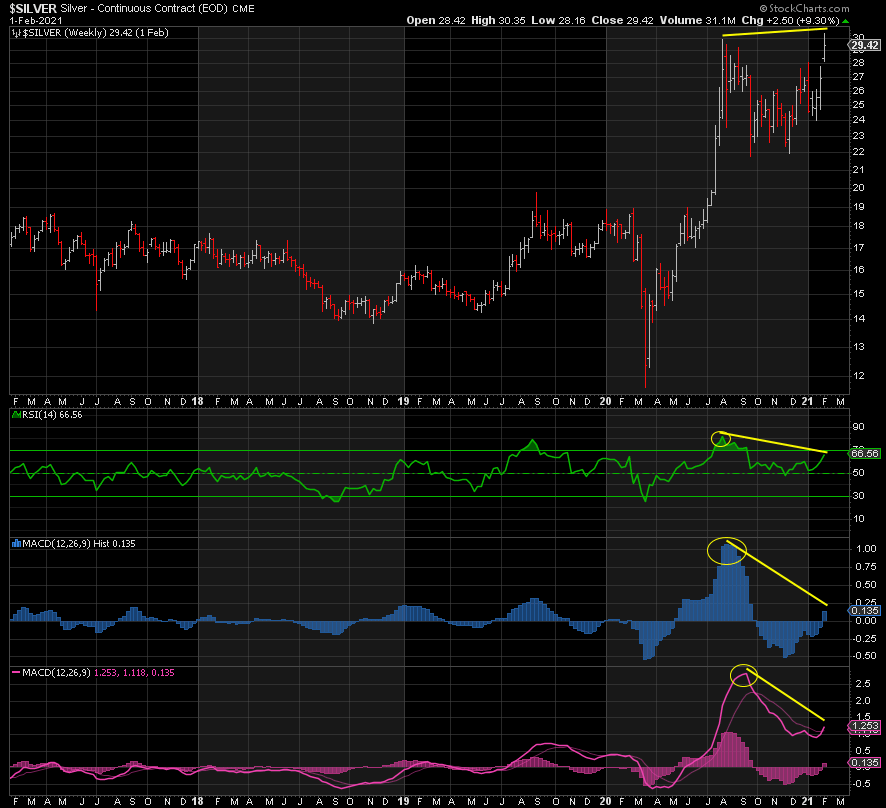 The price action in Silver’s daily chart also looks like a blow-off, where everyone panics buys at the peak for fear of missing out on further price gains. The inflows of cash into the Silver ETF, SLV, hit record levels, 40% higher than the previous record set back in 2013. Huge trading volumes coupled with gaps higher can signal blow-off peaks and definitively confirm the extremity in bullish sentiment. 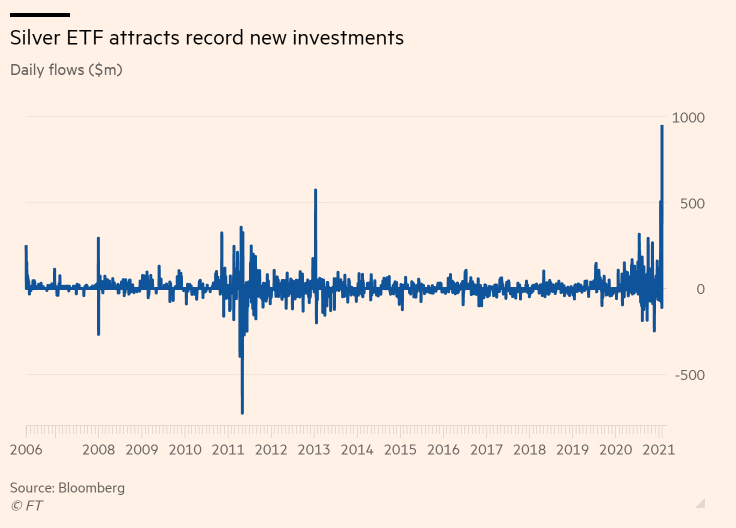 Then there was the Gold:Silver ratio. While Silver was soaring for the past week, Gold had gone nowhere, hence: 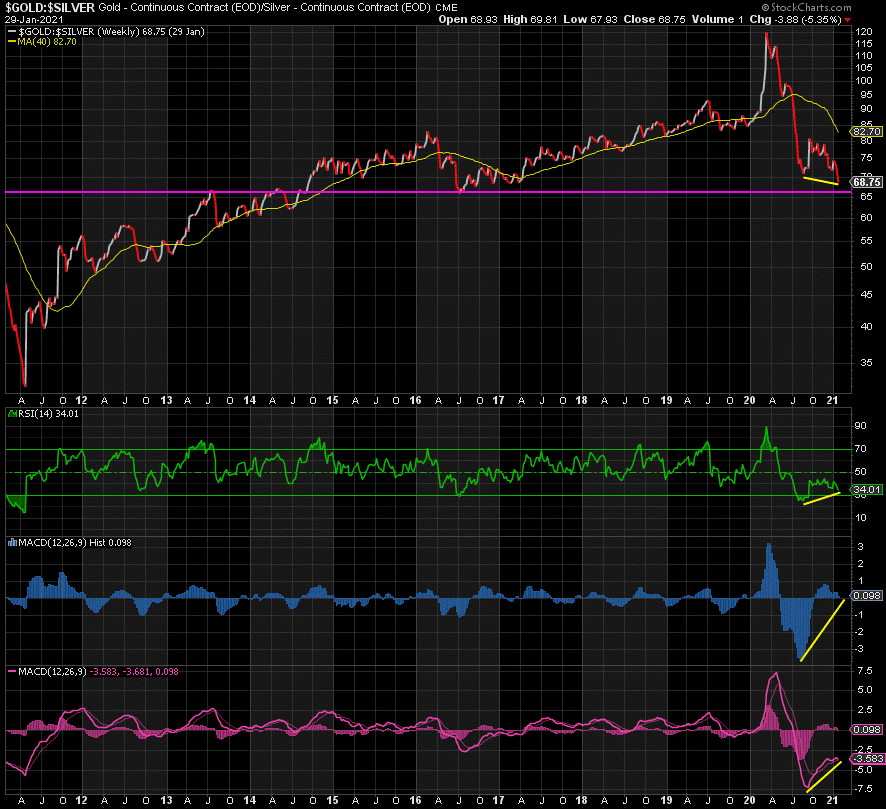 For the Gold:Silver ratio to go up, either Gold had to rise faster than Silver or fall slower. Given the other signals, the likelihood was the latter. 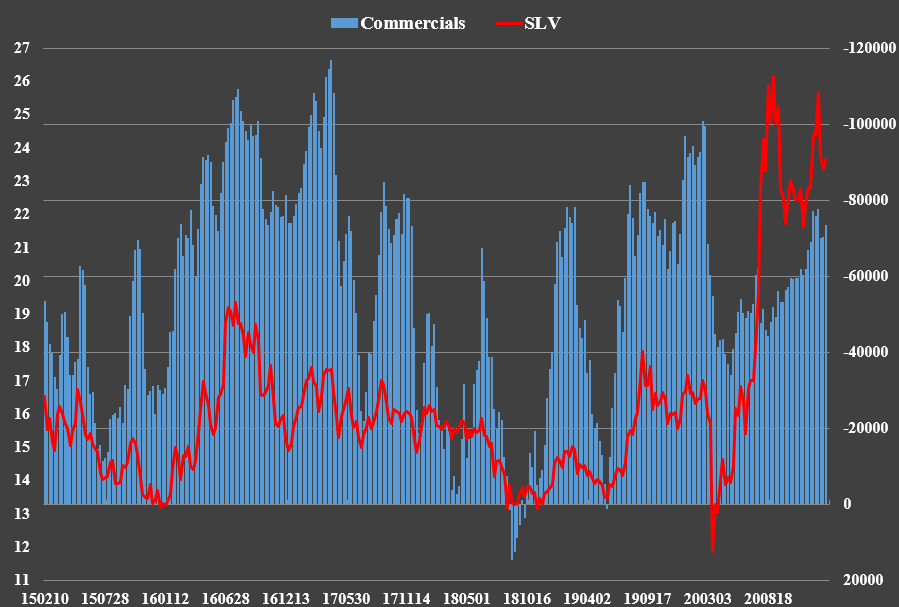 Last but not least, as of January 26, the Big Bullion Banks were holding their biggest short position since February 2020 and climbing. Note that Silver crashed in March 2020, i.e., within a month. This was before the rally to new highs even began, so they were likely to be even more short as of February 1. Anyone familiar with how futures work in the precious metals know that the Bullion Banks are extremely unlikely to allow themselves to be steamrolled, i.e., have their shorts squeezed and lose billions. These are not Hedge Funds, like those who were short GameStop. A brutal smackdown was far more likely and imminent.

Taken together, these data points warranted caution at the very least, especially after a sharp rally that has everyone bullish to the extreme and Silver extreme overbought. We now know what happened next: 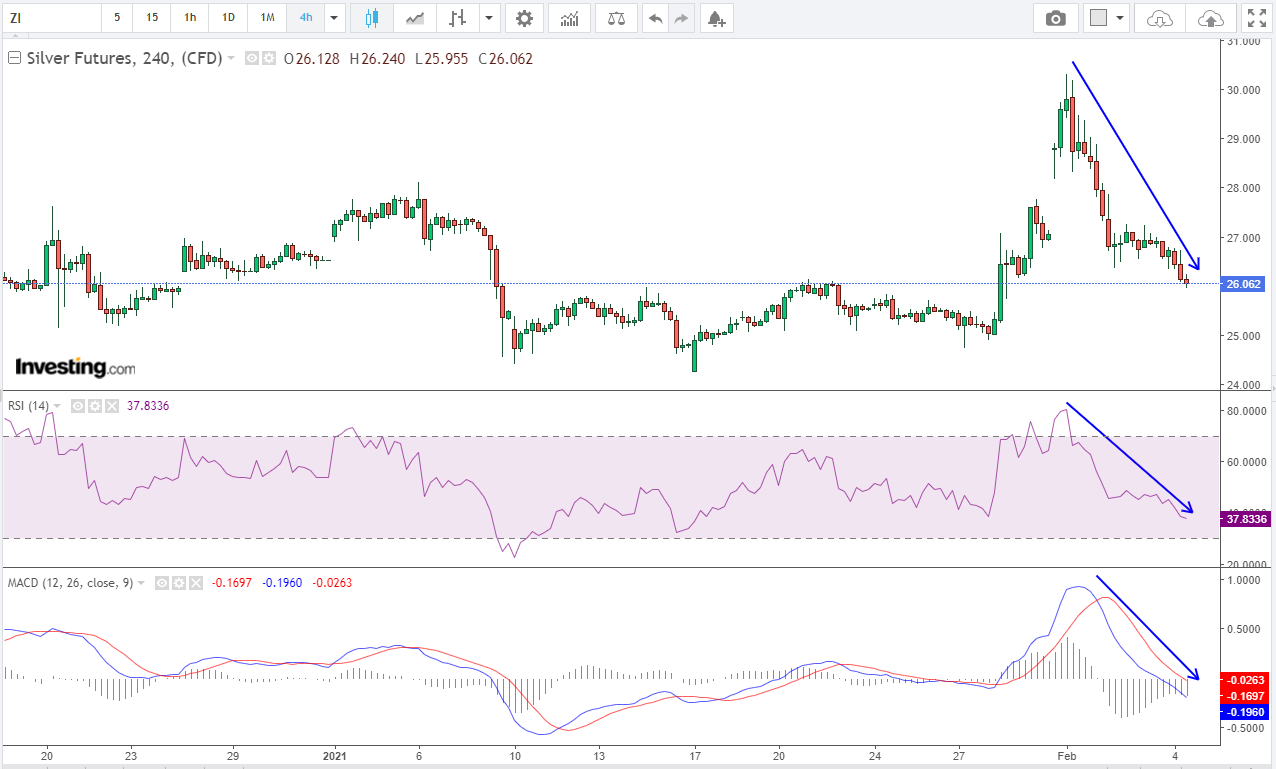 The purpose of this is not to rub salt in the wounds but to learn which signals to watch for that indicate an imminent peak in price. They also work in the opposite direction too, when looking for a major bottom from which a spectacular rally is to occur. This is what I’ll be looking for with respect to such a bottom in Silver:

Extreme bearishness: Everyone and their dog has given up, thrown in the towel. Massive outflows from Silver ETFs, perhaps new record outflows.

Extreme oversold: RSI near, at, or below 30.

Positive divergence: A lower low in price but a higher low in the RSI and/or MACD indicators.

Positioning: A sharp drop in the Commercials’ net short position.

I would also keep an eye on fundamentals news with regard to new stimulus and yield curve control. Keep an eye on inter-market analysis, such as real yields and the dollar too.

If these multiple tools all point upwards, you can have a greater degree of confidence that the bottom is in place or close.

Finally, taking a couple of steps back to view the bigger picture: I believe that the next major low will set us up for a truly sustainable rally to $40-50, but the risk is down to anywhere between $19-24 before this occurs to create the fuel for such a spectacular rally. Simply put, I don’t believe we’re done on the downside yet, but the further we fall, the bigger the reward that follows, IMHO.

Where Next for Silver?

The Precious Metals Projections for Gold and Silver Starts Here