After a tumultuous 2020 for the Bullion Banks, the delivery demand at COMEX has continued unabated in 2021. Are we getting close to "breaking the COMEX"? No, not yet. However, global physical demand is clearly placing a strain on The Banks' ability to flow metal around the planet and then make delivery at the price discovered through their fractional reserve and digital derivative pricing scheme.

We've written about this often over the past twelve months. After the near collapse in March of last year, the CME and LBMA have aggressively worked behind the scenes to construct mechanisms designed to keep their monopolistic pricing scheme afloat. They've created entirely new contracts, they've designed a way to "deliver" fractional ownership in London bars, and they've been forced to supply record amounts of metal to the COMEX vaults—nearly quadrupling the amount of gold supposedly held within the COMEX vaulting structure. You can learn more by reviewing these links:

This snippet from that third link above lists some of the COMEX delivery data from just after everything changed in March 2020: 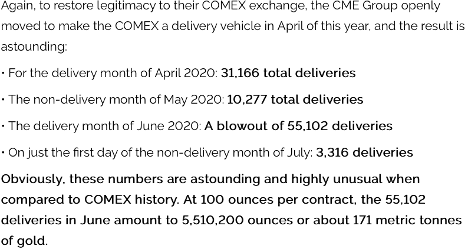 And now in 2021, global delivery demand continues. The first "delivery month" of the year was February, and it played out as follows:

Obviously, the 2020 trend of extreme delivery demand has extended unabated into 2021.

And now here's something interesting. The month of March is NOT a recognized COMEX delivery month for gold. Instead, the current front month focus of volume and trading is the Apr21. However, a few contracts usually get settled out in March—as you can see below from the data I have for the past six years:

So, for the 5-year period preceding the moment that everything changed in March 2020, the average total of March contract deliveries was just 379.

With the craziness of March 2020, total deliveries this month a year ago surged to 2,914 contracts. As you can see, this was A LOT by any historical or average measure. If we add these to the pile, the previous six years saw a March delivery total of 4,811 contracts and an average of 802 per March.

So with all of this in mind, let's check what's happening here in March 2021. Shall we?

The Mar21 COMEX gold contract went off the board on February 25, and it seemed at the time that this month might play out like March last year, as there were originally 2,960 contracts left open and possibly "standing for delivery". A total of 2,531 "deliveries" were made that first evening, and it seemed as if all was said and done with the focus turning to April.

But a funny thing has happened as the month has progressed. Keep in mind that the Mar21 contract continues to trade through the delivery month—it's just that any holder of the contract must show 100% margin in their account as proof of their willingness or ability to take or make delivery. And boy oh boy, that willingness is suddenly being displayed.

As you can see below, total deliveries in March have surged over the first half of the month. After those initial "deliveries" of 2,531 contracts, the "metal" has continued to flow—with the total through Monday, March 15 now showing 8,221 contracts! 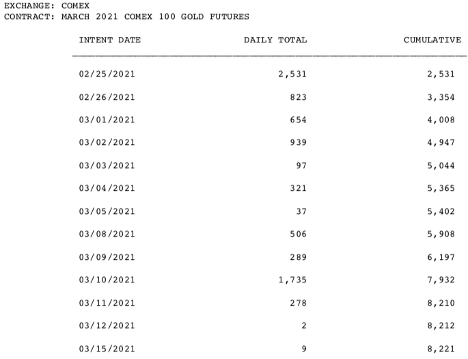 Of course, there's no way to know how many of these "deliveries" came from parties demanding immediate purchase or immediate liquidation. Looking at the per Bank totals, the House (proprietary) Account of Standard Chartered represents more than half of the stops (taking in delivery), but we still can't know for certain if the entire total is purchase or liquidation demand. 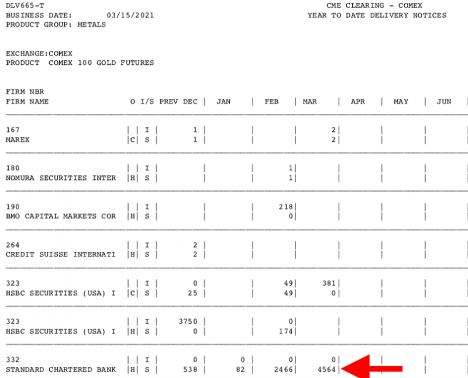 What we DO know is this, however...

Through Monday, the total amount of "deliveries" for the Mar21 COMEX contract stood at 8,221. For context:

And the month is only half over.

So we'll continue to monitor this as the month progresses, and then we'll be certain to keep a sharp eye on the "delivery month" of April. How many will stand when the contract goes off the board on March 30? How many will be added during the month? And will the final total exceed the 31,166 contracts "delivered" in April 2021?

One thing is for certain, however. The CME Group and LBMA truly opened "Pandora's Box" when, in a desperate attempt to shore up confidence in their pricing scheme, they advertised and converted their COMEX contracts into physical delivery vehicles following the events of March and April 2020. By doing so, the CME and LBMA very likely sealed the fate of their fraudulent pricing system, and the continued delivery demands of 2021 are maintaining the pressure and stress felt by the Bullion Banks in the twelve months since.

Everything is Looking Up

A Bottom or THE Bottom in COMEX Gold?