Out of masochism and a patriotic sense of duty to monitor the latest propaganda from on high, I endured the entirety of Joe Biden’s March 25th “press conference” – the first of its kind in the Biden-Harris administration and, based on his performance, perhaps the last.

No decent American should have to suffer through this hour and a half of drivel. Nothing of substance was revealed in its duration – other than the palpable mental decline of the man with his hands on the nuclear football. 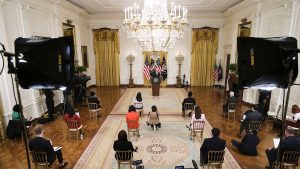 Let’s dispense with the wordplay: this was not a “press conference” in any conventional sense of the term. It was an expensive theater production – “publicly” financed, of course, at the expense of normal people.

In its historical and popular conception, the term “press conference” is taken to mean a freewheeling exchange of questions and answers between independent journalists and the politicians whose feet they are intended to hold to the fire:

“The watchdog role pre-new media had been performed largely by trained journalists who, under the best of circumstances, focused on uncovering the facts surrounding serious political transgressions.”

Whereas the legitimate and important role of the media was once understood to be challenging power, the United States government now openly persecutes real journalists like Julian Assange for embarrassing it with real information regarding its war crimes in Iraq (including targeting Reuters journalists on the ground covering the illegal war). 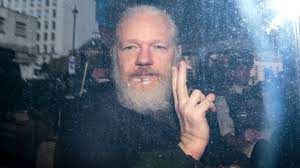 Practicing real journalism in the 21st century gets you locked up in perpetuity and accused (evidence-free) of being a Russian asset by the corporate-state press. 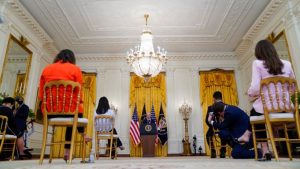 In Biden’s handlers’ rendition of a “press conference,” the “journalists” – properly vetted, credentialled, socially distanced, and masked – sat obediently as Biden read their names off of a pre-ordained list – painfully, mechanically, slowly, one-by-one. 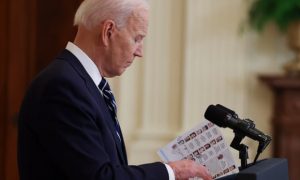 Biden’s handlers prepared a headshot lineup up the “journalists” he would be calling on to answer “questions.”

Eyes blank, looking like an escaped nursing home resident who wandered in front of a microphone, Biden scanned the room to try to connect the faces to the names as he had attempted to memorize for weeks with staffers. 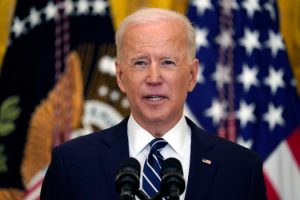 Once called upon, the “journalists” then stood up and asked their pre-approved “questions.” The theater, disguised as a press conference with media, began in earnest.

Then it rained softballs hard, the softest of the soft. The “questions” from the “journalists” included such piercing gems as:

“The perception of you that got you elected as a moral decent man is the reason why a lot of immigrants are coming to this country and entrusting you with unaccompanied minors. And is there a timeline for when we won’t be seeing these overcrowded facilities run by CPB when it comes to unaccompanied minors?”

In 2021 in the White House, the line between adversarial “journalist” and “press secretary” running PR is blurred beyond discernment. The roles are now one and the same. 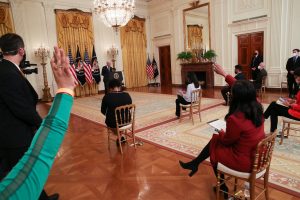 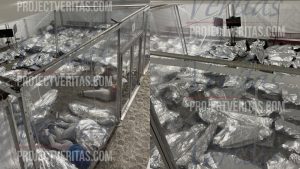 The children the Biden administration is holding in “federal facilities” at the border (leaked by Project Veritas). These are definitely not “cages” like that bigot Trump put them in because the walls are plastic. These are plastic Biden-Harris love-barriers erected with love to hold all the love in.

Biden couldn’t even handle gracefully the pre-screened softballs that his handlers had rehearsed the correct answer to. In his confused ramblings about the filibuster, Biden said:

“Journalist”: “Regarding the filibuster, at John Lewis’ funeral, President Barack Obama said he believed the filibuster was a relic of the Jim Crow era. Do you agree?”

“Journalist”:  “Why not abolish it if it’s a relic of the Jim Crow era?”

… Looks to binder for guidance…

Joe Biden: “Successful electoral politics is the art of the possible.”

All of this, however pathetic, was to be expected. Biden previously promised his Manhattan banker owners in the previous election cycle that “nothing would fundamentally change” in US policy once he got elected.

Not much has, except that presidential “press conferences” are less frequent, less entertaining, and significantly sadder.

What tools like Joe Biden and his army of “journalist” PR agents don’t understand, but that they may someday, in this life or the next, is that – in the grand hierarchy, in the eyes of the true elite – they are the same trash as the former American middle and working classes they oversee the destruction of on behalf of their owners.

Everyone involved in this theater production is just as disposable to the central bankers/Davos/World Economic Forum crowd as a Nebraska corn farmer – and disposed of they will be when the time is right.

A list of topics that somehow didn’t make it to the pre-approved list of questions at the “press conference” include: