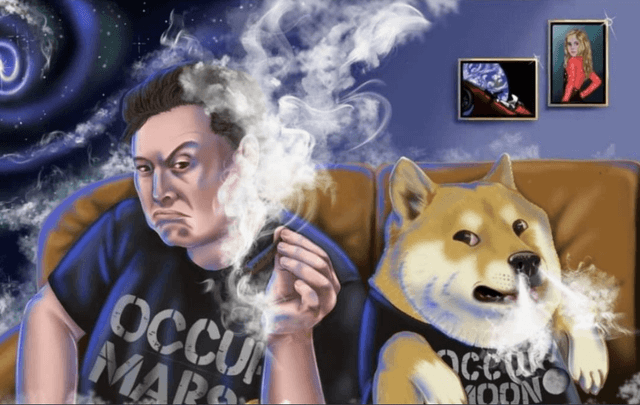 Elon Musk sharing a toke with a Shiba-Inu representing Dogecoin.

What do the contrasting trajectories of Tesla (TSLA) and Dogecoin this year tell us about the current, bizarre market environment? Consider a few points. To begin with, there's Elon Musk's involvement with both, as CEO/"Technoking" of Tesla and pumper of Dogecoin.

Late Tuesday night, Elon Musk to a break from his responsibilities as Tesla Technoking, CEO/CTO of SpaceX, and Saturday Night Live guest host to listen in to a Twitter Spaces conversation about Dogecoin.

The next day, Dogecoin surpassed Bitcoin as the most heavily traded crypto coin, with $19.4 billion of it trading over the previous 24 hours.

By way of comparison, the most heavily traded stock on Wednesday was Tesla, with about $14.7 billion of it trading on the day.

As Compound Capital Advisors founder Charlie Bilello noted, Dogecoin's market cap had exceeded that of more than 80% of the stocks in the S&P 500.

Or is the simulation just messing with us? Roko Mijic, of Roko's Basilisk fame in rationalist circles, suggested recently that Dogecoin could eventually become the crypto version of silver to Bitcoin's gold.

One point in favor of the simulation theory is how all of this is oddly connected: Elon Musk met current girlfriend Claire Boucher, aka Grimes when he found out that she had anticipated his pun about Roko's Basilisk:

In 2015, she created a character named “Rococo Basilisk” for a video of her song “Flesh Without Blood.” “I don’t know if you’ve heard of Roko’s Basilisk,” she told Fuse. “[This character] is doomed to be eternally tortured by an artificial intelligence, but she’s also kind of like Marie Antoinette.”

“Elon was researching the idea of joking about Rococo Basilisk, and when he saw Grimes had already joked about it, he reached out to her,” says the insider. “Grimes said this was the first time in three years that anyone understood the joke. They were both poking fun at AI.”

Simulation or not, our view on the crypto craziness remains that it's analogous to the Dot-Com era: some transformative innovation wrapped in a larger bubble. A few crypto currencies may end up with Amazon (AMZN)-like trajectories, while most of the rest will be more like TheGlobe.com (TGLO).

Our approach to the current market remains to buy and hedge a handful of names that fit these two criteria:

The second criterion is much easier to find than the first. We simply apply our hedging algorithm to find least-expensive, or optimal hedges, and compare the costs.

The first criterion has been hard. As we mentioned last week (Discovery In The Amazon), one of the factors we use, a particular gauge of options market sentiment, flipped from outperforming to underperforming this year. Another gauge of options market sentiment has been generating significant outperformance over the past year, but judging from the final, 6-month performance of our top ten names from November 5th, we worried it might have peaked.

This screen capture and the subsequent one are via Portfolio Armor.

We track the performance of our different factors each trading day, and we were surprised to see our outperforming one tick up this week, given the weak performance of that top names cohort from November 5th.

As it turned out, there was no error. The discrepancy was simple: we publicly post the performance of one top names cohort per week, usually the one from a Thursday six months ago. But we post a top names cohort every weekday the market is open and track the performance of those too; our calibration factors are updated daily based on that performance. The factor in question had ticked up on May 3rd because our top ten names from November 3rd had finished up 101% over the next six months. led by Diebold (DBD) and the triple-leveraged Direxion ETFs RETL, TNA, SOXL.

The way to account for this sort of randomness, if you're using our approach to create hedged portfolios, is to not put all of your money to work on the same day. Splitting your money into a few tranches and investing them at different times should smooth out returns over time.