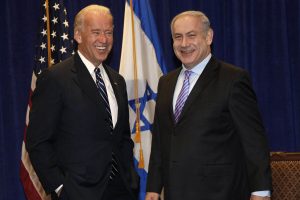 On May 3, 2020, the United States and other repressive governments paid lip service to an independent media — while quietly crushing it at home — with the annual World Press Freedom Day.

Then-candidate Joe “respect the press” Biden’s handlers commemorated that occasion with a Tweet storm that read, in part:

“attacking the press and attempting to intimidate independent media is a standard part of the authoritarian playbook around the world. And it’s why Donald Trump’s efforts to demonize the media put us on such a dangerous path.”

The moral preening on the importance of a free press comes easy when it’s used to bludgeon MAGA; but now that the former president is gone and it’s long-time Biden ally Benjamin Netanyahu, not Trump, bombing a civilian structure housing a local Associated Press bureau, Biden is notably silent on the free-media front:

“ An Israeli airstrike on Saturday destroyed a high-rise building that housed The Associated Press office in the Gaza Strip, despite repeated urgent calls from the news agency to the military to halt the impending attack.” 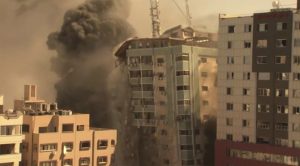 Why is the Israeli government – ostensibly the lone “liberal democracy” in the Middle East as the AIPAC propaganda goes – currently bombing media outlets in civilian neighborhoods?

The answer, as always, is political: Perma-Prime Minister Bibi Netanyahu tried and failed to form a coalition government in the wake of March 2021 elections.

The political straits become dire enough to force Netanyahu to look for political support beyond the normal hardline Zionist allies that have historically supported his political career to the United Arab List Islamist party, an unthinkable governing alliance just a year ago.

Opposition leaders in Israel held fast, Netanyahu failed to form a coalition, or so-called “unity” government, by the May deadline. and Israel remains in political limbo.

Forever the penultimate scheming politician, Netanyahu did the only thing he knows how to do: start a media circus to gin up support from a hesitant Zionist base and to distract from his personal failings – including an ongoing corruption probe that has since been replaced by design in the national media headlines by war stories.

Incidentally, destroying lives to score political points is a tried-and-true tactic out of the morally depraved politician’s playbook.

Bill Clinton employed this same cynical ploy in 1998. Faced with mounting negative attention due to his extramarital Oval Office affair with intern Monica Lewinsky, Clinton pre-empted the unfavorable news cycle and impending impeachment by bombing “terrorist-related targets in Afghanistan and Sudan”. As UPenn political scientist Mark Rozell and others noted at the time:

“I don’t think there is a politically minded person who did not immediately question whether the president was acting genuinely in our national security interest or to get beyond this scandal and create a rally-round-the-flag phenomenon.”

The savvy Clinton rouse worked, at least temporarily. CNN shifted its coverage from non-stop examination of Clinton’s sexual misdeeds to white-knuckle footage of bombs dropping in a far-off land. 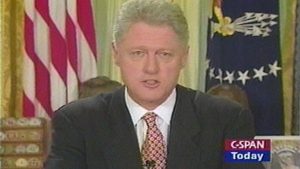 “War,” though, in the 2021 Israel/Palestinian context, is misleading terminology; what Netanyahu initiated is a carpet bomb-fest rained down indiscriminately on a significantly weaker, captive civilian population in the Gaza Strip.

Israeli analyst Efraim Inbar has termed this type of periodic indiscriminate pummeling of non-military targets in Gaza “mowing the grass” – a euphemism for breaking Palestinian resistance through terror.

As of May 17, after roughly a week of intentional bombing of civilian structures under the guise of the unfortunate but necessary targeting of Hamas terrorists hiding within the Gaza population, the IDF has killed “at least 192 people, including 58 children and 34 women” so far.

In the same period, 10 Israelis have died – a roughly 20:1 ratio of Palestinian-to-Israeli dead bodies that represents a recurring pattern of disproportionate death and destruction on one side. 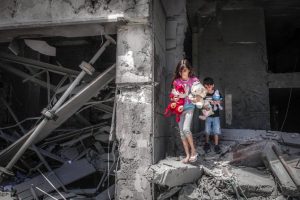 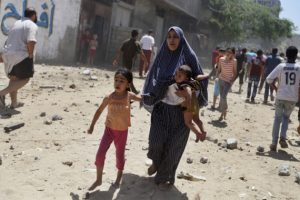 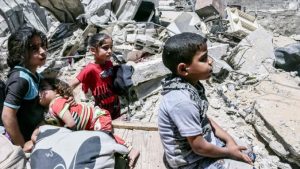 How many pictures of forsaken women and children among charred urban Gaze Strip rubble does it take to paint an accurate picture of the crimes against humanity perpetrated by the Israeli Defense Forces – the ones committed as a cynical political ploy by a careerist politician desperate to hold onto power in the face of crumbling support and corruption investigations?

Interestingly, Israeli national security advisor Meir Ben-Shabbat recently told the US State Department to “stay out of the crisis in Jerusalem.” The audacity and entitlement of the Israeli state at the expense of the American people staggers the conscience.

How dare the Israeli state take $3.3 billion in annual funding – without which it would be doomed – while a half-million homeless Americans sleep on the streets, including a disproportionate share of US veterans. And then, to rub salt in the wound, to tell the government charged with representing Americans’ interests to “stay out” of its military affairs, all while using funds grifted out of taxpayers’ coffers with virtually no strings attached except a timid plea to, maybe, kill fewer innocent women and children. 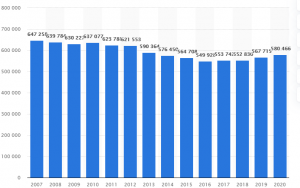 In a positive development, though, perhaps a small silver lining, the powerful Israeli lobby is seemingly less effective at whispering sweet nothings into the ears of elite policymakers and corporate media than it has been historically.

Now that the IDF is even demolishing Associated Press headquarters in broad daylight in addition to more standard civilian targets, the “self-defense” line becomes less and less convincing.