Much has been made about The Fed's extensive use of the word "transitory" when describing the current inflationary environment. If you understood why they keep using that word, you'll soon appreciate why all price dips in COMEX gold are transitory, too.

"You keep using that word. I'm not sure it means what you think it means." 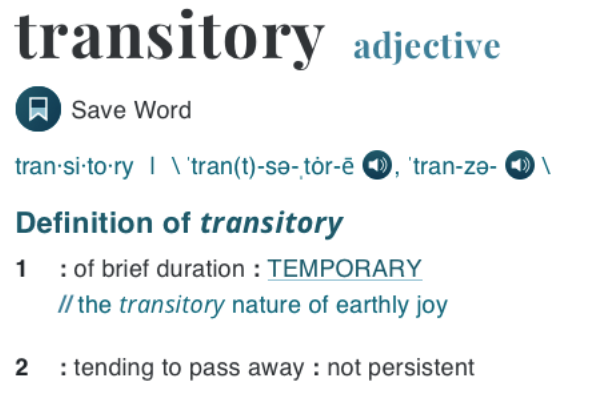 Let's begin this week with The Fed's overuse of this word. What are Powell and his goons attempting to accomplish by relentlessly repeating this term with every public appearance?

First of all, understand that this current inflationary cycle is most definitely NOT transitory. It is being pushed along by BOTH of the two classical inflation drivers:

Typically, in response to higher inflation, bond investors demand higher yields. Consider it this way: Who in their right mind would accept a 2% yield in a 10-year U.S. Treasury note when price inflation is at 4%? That investor would be guaranteeing himself a 2% loss of purchasing power over the life of the note if inflation remains unchanged. Therefore, a rational investor would demand a higher nominal interest rate and would forestall buying a treasury note until the interest rate increases.

But the U.S. government cannot afford higher interest rates and The Fed cannot allow higher rates for a multitude of reasons, chief among them the need for negative real interest rates to inflate away the current extreme levels of debt.

Therefore, in an attempt to "jawbone" interest rates lower and reassure bond investors that it’s OK to buy U.S. treasuries with a yield of under 2%, The Fed is desperately pumping the word "transitory". Again, why? Because if you believe that, by the end of the year, inflation will be back under 2%, then maybe that 10-year T-note you're thinking about buying doesn't sound too bad.

But again, this current inflation is NOT transitory. Instead, it's a direct consequence of all the fiscal and monetary policies the U.S. has pursued since the onset of The Covid Crisis in March of last year. It was a predictable outcome and here we are.

And this jawboning was a predictable response, too. In our annual TF Metals Report macrocast issued back in January and in several posts written here for Sprott Money we laid out this timetable of steps that The Fed would take this year as they gradually move toward outright and overt Yield Curve Control. This screenshot from the late January post linked above: 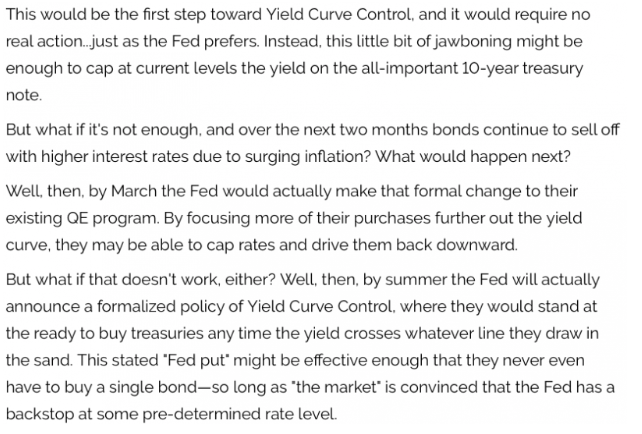 The only error in that post was in thinking that the always-reactive (definitely never pro-active) Fed would move quickly. Instead, jawboning continues and the move to extend the weighted average maturities of the existing QE program was announced in mid-May and not mid-March.

So, since we're now "behind schedule", we'll look for a more formalized announcement of the average weighted maturity shift at this month's FOMC and then the move to more direct Yield Curve Control by late this year as the bond market finally realizes that inflation is NOT "transitory" and a buyers strike emerges that threatens to drive interest rates higher.

Recognition of direct Yield Curve Control will be incredibly bullish for COMEX gold and, as such, all dips in price will be "transitory".

The seven-month price consolidation has ended and, just as we wrote in this postfrom April 13 and this post from two weeks ago, price is now headed to near $2000 by early July. Once there, price will consolidate again and prepare for an autumn rally that takes it back to the 2020 all-time highs near $2100 per ounce and then another 10% higher and up to near $2300 before year end.

And what will be the cause of this late year surge to new all-time highs? All of that jawboned, covert and overt Yield Curve Control will drive inflation-adjusted or "real" interest rates to multi-decade lows. Real interest rates are historically the most closely-correlated driver of gold prices and this relationship will continue to flourish this year and next.

Gold and Silver Ready for Summer - Weekly Wrap Up