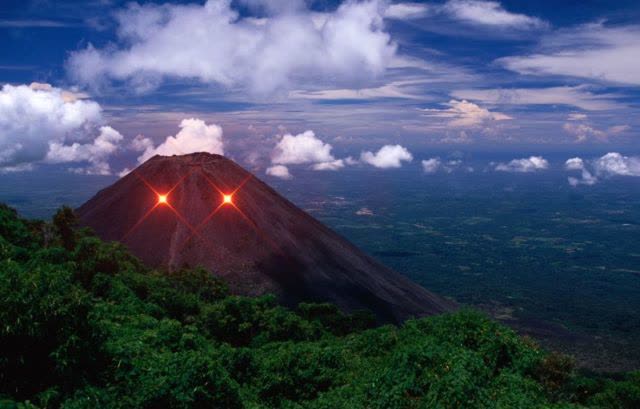 Two weeks ago, MicroStrategy (MSTR) CEO Michael Saylor teamed with Tesla (TSLA) CEO Elon Musk to stem the slide in Bitcoin by announcing a consortium of leading Bitcoin miners to address concerns about the environmental impact of Bitcoin mining (Bitcoin's Plunge Protection Team). This week, Bitcoin got a boost from the combination of Saylor's successful junk bond offering for MicroStrategy and El Salvador President Nayib Bukele's announcements that Bitcoin would be accepted as legal tender in his country, and that his state-owned geothermal energy company would facilitate volcano-powered Bitcoin mining.

The combo of the oversubscribed bond sale for MicroStrategy (the net proceeds of which were earmarked for additional Bitcoin purchases) and the El Salvador news sparked a double digit gain in Bitcoin Wednesday. Below we'll look at the impact it had on a few stocks we've mentioned here recently, but first let's consider some potential pitfalls in the El Salvador news.

Will Global Climate Activists Accept It?

For an old school environmentalist, this would be cause for cheer: much better to emit water vapor than carbon monoxide or some other pollutant. Whether climate change/global warming activists will warm to it is another question. Water vapor is, after all, a greenhouse gas. In the past, climate activists have acknowledged that, but focused on man-made emissions instead. For example, consider this excerpt from a Los Angeles Times article on the subject ("Greenhouse Gases, Water Vapor, And You"):

“Water vapor is the most important greenhouse gas and natural levels of [carbon dioxide, methane and nitrous oxide] are also crucial to creating a habitable planet,” writes John Reilly, professor at MIT and co-director of the Joint Program on the Science and Policy of Global Change, Center for Environmental Policy Research, in an email.

“Concerns about global warming are about how human beings are altering the radiative balance,” says Reilly.

Will climate activists continue to ignore water vapor, or will they turn against it being pumped into the atmosphere to manufacture invisible internet money? Time will tell.

Risk Of El Salvador As A Poster Boy For Bitcoin

Before Bitcoin maximalists imagine the rest of the world following El Salvador's example, they ought to acknowledge that El Salvador has a dollarized economy now. Without its own currency, it has nothing to lose by accepting Bitcoin; in contrast countries with their own currencies would be giving up the seigniorage that comes with it. The other thing they ought to acknowledge is that, for better or worse, El Salvador is now the poster boy for Bitcoin, and the lofty claims made about it. For a small taste of those claims, see this essay by James Poulos, or the pinned tweet by Michael Saylor below.

For an acknowledgement that El Salvador is now a poster boy for Bitcoin, see Balaji Srinivasan's tweet below,

The challenge for Bitcoin enthusiasts is that El Salvador is, well, El Salvador. Salvadoran immigrants have struggled in the U.S., as Jason DeParle noted in a dispiriting New York Times article ("Struggling to Rise in Suburbs Where Failing Means Fitting In"). One might hope El Salvador's embrace of Bitcoin will attract talented immigrants to El Salvador, but that hope should be tempered by knowledge that El Salvador has the highest homicide rate in the world.

The Bitcoin Bounce's Impact On Our Stocks

As we've mentioned before (most recently in Wendy's: Where's The Beef?), the recent slide in Bitcoin facilitated the resurgence of meme stocks like AMC Entertainment Holdings (AMC) and The Wendy's Company (WEN). The bounce in Bitcoin on Wednesday had the opposite effect, with both of those stocks dropping by double digits. For our system's top names, the spike in Bitcoin-related stocks has offset the drop in meme stocks so far. For example, these were our top ten names on Tuesday. 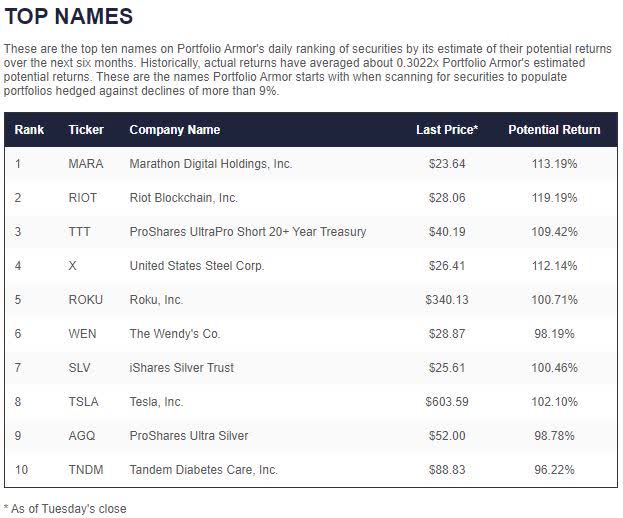 Contra our prediction that Wendy's had more room to run, it dropped 12.68% on Wednesday. But the two Bitcoin miners in our top ten Tuesday, Riot Blockchain (RIOT) and Marathon Digital Holdings (MARA) were up double digits.

It will be interesting to see if the same correlation applies over the next several months.