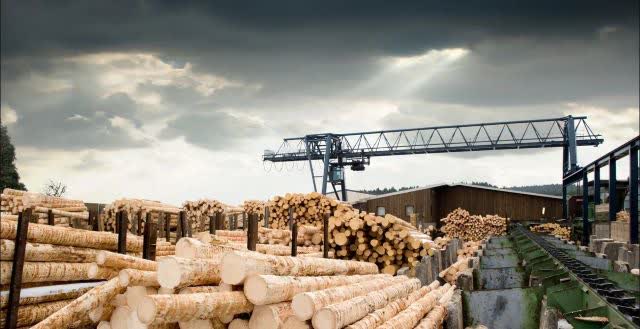 Softwood lumber under an ominous sky. Image via the National Association of Homebuilders.

One of the big stories over the last year had been the spike in lumber prices. We wrote about that last month (Wood Versus Wood), noting that the performance of the iShares Global Timber & Forestry ETF (WOOD) was starting to intersect with that of Cathie Wood's flagship Ark Innovation ETF (ARKK) over the last year.

Since then, they've diverged.

More importantly, according to Michael Gayed, CFA, has been the recent divergence between lumber and gold.

In a recent Twitter thread, Gayed argued that market crashes and bear markets over the last few decades have been preceded by weakness in lumber relative to gold.

According to Gayed, lumber weakness relative to gold presaged the 2000-2002 bear market and the 2008 crash.

Using the WOOD ETF as a proxy for lumber, and the Sprott Physical Gold Trust ETF (PHYS) as a proxy for gold, you can see lumber weakening relative to gold over the last month.

A Problem With Crash Predictions

Whenever you read investment commentary, it's useful to ask what the writer is selling. In Gayed's case, he runs a tactical asset rotation fund. In our case, we developed the hedged portfolio method and have a hedging app, so it's in our interest to pass along crash predictions. Nevertheless, we have to acknowledge a problem with crash predictions: they dramatically outnumber actual crashes. So we're not convinced Gayed's prediction here will come to pass. But it might not hurt to add some downside protection just in case he ends up being right. That's particularly true given that it's relatively inexpensive to hedge market risk now. We demonstrated a couple of ways of doing so in the video below.