“This is the peaceful and effective solution millions of Americans have been praying for to take back America county by county and state by state.”

All hat, no cattle? Not Elko and Lander Counties in Nevada.

These two jurisdictions have drawn a line in the sand to #UNRIG from unconstitutional abuses of power at the national and state-level — abuses which have, unfortunately, accelerated in the COVID-19 era.

Per Elko County Board of Commissioners Resolution 2021-19, passed on June 2, 2021, local leaders signed on to join the Constitutional Sheriffs and Peace Officers Association, headed by #UNRIG’s very own Sherriff Richard Mack. 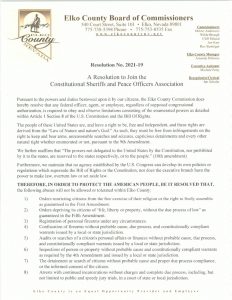 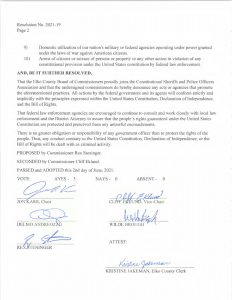 Join the #UNRIG fight to challenge growing authoritarianism at all levels of government and restore control to the People – the only place it belongs.

Robert David Steele, Sherriff Mack, and Co. will roll into Elko County on June 20th to honor the on-the-ground work of the local leadership to re-cement and recodify Constitutional values of freedom of religion, freedom of assembly, and the rest of the Bill of Rights into local law.

After that, on July 4th, you can find the #UNRIG crew at iconic Mount Rushmore to celebrate Independence Day. To find an upcoming stop near your hometown as the national tour rolls on, consult the #UNRIG schedule.

COVID-19 Crackdowns: Violating the Bill of Rights at Unprecedented Scale

Using a weaponized governing infrastructure via bloated federal and state bureaucracies, the corporate state has grabbed unprecedented powers for itself in the past year – Constitutional limits be damned.

Unfortunately, the ruling elite understands well that local checks on their power threaten their viability. Using the health scare of COVID-19 as a pretext, accordingly, they cracked down on virtually every Constitutional protection against government overreach at a scale and with a zeal never before witnessed in American history.

Without a coordinated, nationalized (and, indeed, globalized) effort from on high by the WHO, the CDC, the NIH, and their peers at the state levels – cheerleaded by Deep State propagandists in the corporate media – these crackdowns on civil liberties would never have succeeded, nor even have been possible.

The reclamation of local political control is the only sustainable antidote to such power grabs.

Two Nevada Counties Take Back the Power: The #UNRIG Model in Action

“The people of these counties and their elected officials have had it up to here with unconstitutional dictates and mandates.”
-Sheriff Richard Mack

The specifics of Resolution 2021-19 via the Elko County Board of Commissioners prevent such abuses of its citizenry enumerated below:

“1) Orders restricting citizens from the free exercise of their religion or the right to freely assemble as guaranteed in the First Amendment.

2) Orders depriving its citizens of “life, liberty or property, without the due process of law” as guaranteed in the Fifth Amendment.

3) Registration of personal firearms under any circumstances.

4) Confiscation of firearms without probable cause, due process, and constitutionally compliant warrants issued by a local or state jurisdiction.

5) Audits or searches of a citizen’s personal affairs or finances without probable cause, due process, and constitutionally compliant warrants issued by a local or state jurisdiction.

6) Inspections of person or property without probable cause and constitutionally compliant warrants as required by the 4th Amendment and issued by a local or state jurisdiction.

7) The detainment or search of citizens without probable cause and proper due process compliance or the informed consent of the citizen.

8) Arrests with continued incarcerations without charges and complete due process, including, but not limited to public and speedy jury trials, in a court of state or local jurisdiction.

9) Domestic utilization of our nation’s military or federal agencies operating under power granted under the laws of war against American citizens.

10) Arrest of citizens or seizure of persons or property or any other action in violation of any constitutional provision under the United States constitution by federal law enforcement.”

A special shoutout to Commissioner Rex Steninger for demonstrating exceptional leadership on this issue.

Critics of the #UNRIG ethos legitimately question why a national movement is necessary to restore local control. That’s a solid line of inquiry, as a healthy skepticism of any nationalized movement is always warranted.

The answer, as demonstrated by the elected leadership of Elko County: #UNRIG is not a top-down reform movement. There is no permanent hierarchy, nor any set of rigid dictates. Rather, under the vision of Robert David Steele, #UNRIG is a catalyst for local change, to spur a new vision for popular control of communities over their own affairs from coast to coast.

Defending human liberty depends on local activism. We wholeheartedly endorse and commend the efforts of the people of Elko and Lander Counties, through their duly elected leaders, to reassert their innate right to self-determination – the birthright of every American, heirs to the Western Rennaissance and Enlightenment.

Stand up for your own community’s sovereignty and join the #UNRIG fight today.