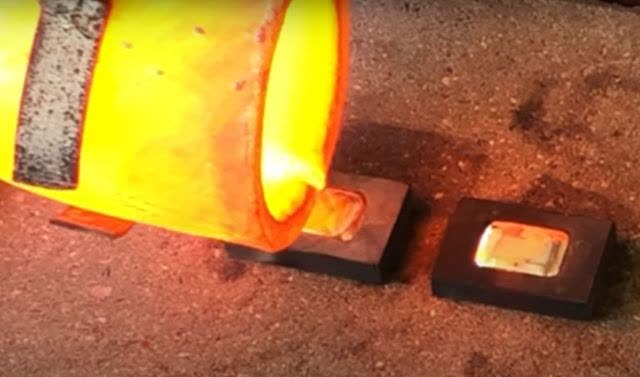 Screen capture from a YouTube video about casting silver bars at home by  "RobFindsTreasure".

Silver Melts Down Too

In our last two posts (Gold Melts Down and "Gold Is Now Technically Toast") we talked about the recent slide in gold, but of course silver has melted down too recently. The one-week chart below, via BullionVault, isn't pretty. 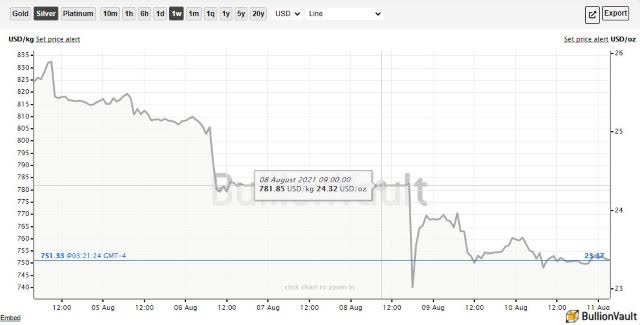 Let's talk about why the big infrastructure bill didn't boost silver prices, address some recent questions and objections, and then look at how you can hedge against further declines in silver.

In response, we linked to a post we wrote here back in February.

In short, record government spending this year was baked into the cake as soon as the Democrats won the Senate runoffs in Georgia, assuring them control of both Houses of Congress in addition to the White House. That gold and silver are down year-to-date anyway suggests that Modern Monetary Theory advocates are essentially right: the only real limitation on government spending is the prospect of inflation, and if the market thinks that inflation is transitory, then "money printer go brrrrr".

Image via Know Your Meme.

Untrue. Our system is agnostic on precious metals and has been bullish on them in the past. Each trading day, it gauges stock and options market sentiment and ranks the top ten names in its universe based on their potential returns over the next six months. Those top ten lists have included precious metals in the past. For example, the iShares Silver Trust (SLV) was our #1 name last September at the same time the ProShares Ultra Gold ETF (UGL) was #3. 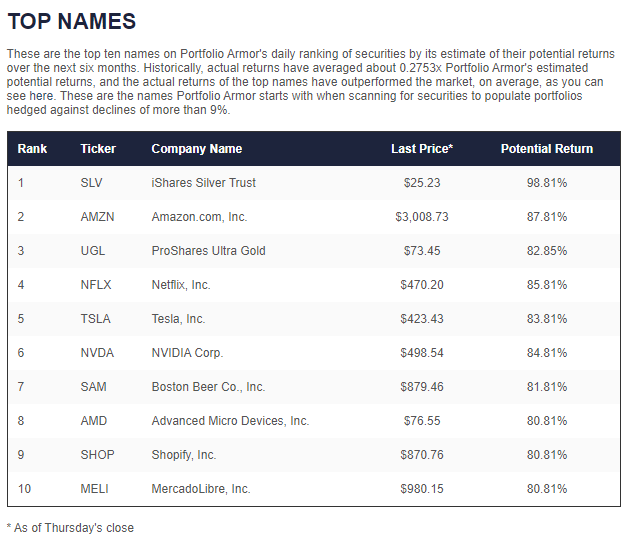 You probably won't be surprised to learn those two precious metals names did the worst out of that top ten cohort over the next six months.

Why Should I Hedge If I'm A Long Term Bull?

Despite silver sliding in the face of unprecedented fiscal and monetary stimulus, you may still be a long term bull on it. Maybe you expect the dollar to ultimately go to zero, and silver to remain valuable as it has been for thousands of years. Hedging may make sense in your case for two reasons. First, to protect you in case you end up being wrong. And second, because hedging can give you dry powder in the event of a steep, temporary decline -- dry powder you can use to buy more silver at depressed prices. With those objections out of the way, let's look at a few ways you can hedge against further declines in silver.

Hedging Against Further Declines In Silver

In the video below, we use our iPhone app to scan for optimal hedges on SLV as a proxy for silver prices. Yes, we know it's not a perfect proxy for silver, but we need an underlying security that is liquid and has options traded on it, and SLV fits that bill. The Sprott Physical Silver Trust (PSLV) doesn't. If you have other suggested proxies, feel free to mention them in the comments.