Since June 1 (some say since the August 2020 peak), we have seen the Bullion Banks manipulate the markets lower on at least four occasions, all centered around major events such as the FOMC or Non-Farm Payrolls or during illiquid trading periods such as that on Sunday evening futures markets. This ensures that they meet the least resistance and get the biggest move possible. Such was the case on Sunday when the market makers, the Bullion Banks, created 20,000 futures contracts in Gold and dumped them on the futures market Sunday evening, cleaning out support levels and stops while they covered at lower levels for massive profits. Why? Because it’s easy money if you can create futures contracts at will and dump them on the market whenever you feel like it. You are incentivized to do that if you are holding a significant short position: 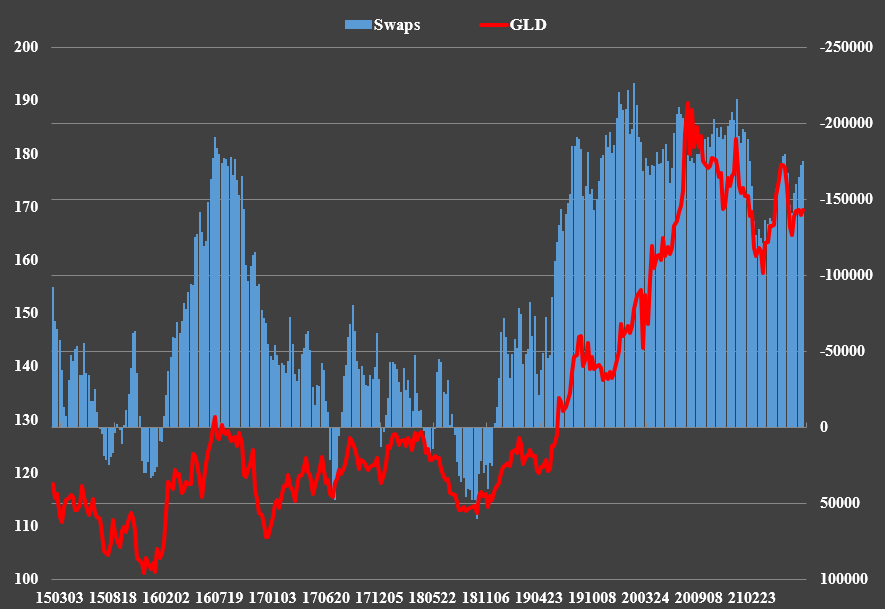 But what was the hurry? Why be so blatant about it to the point of being obvious? Was it to remind the market who truly controls the metals? The more likely explanation is that they are desperate to get out of their huge short positions because they know something is brewing that will send precious metals skyward. They would incur enormous losses if that were to occur, possibly even bankruptcy.

The raid on precious metals on Friday, post Non-Farm Payrolls, then immediately followed again on Sunday evening when the markets first opened, stinks of desperation. Those of us familiar with the precious metals futures market have known about their manipulation for years. Courts have proved it too. The former Bank of England Governor, Eddie George, confirmed it also. It has become so common, it’s predictable. Yet never have I seen the Banks do it so blatantly for all to see, more than once and in quick succession. When you run out of a burning building, you don’t stop to close the door behind you, for obvious reasons. These guys steamrolled the door down to get out. I don’t know what’s coming, but I do know what would send Gold, Silver, and the miners skyward.

Gold soared after the dot-com bubble burst in 2000 and the 10-Year Treasury Yield peaked at 6.82%, a level never to be seen again. Interest rates were slashed by Greenspan, and the Bank of Japan pumped liquidity into U.S. markets. Gold rose 300% over the next seven years.

Then came the 2008 stock market crash, and Gold fell 34% in just seven months. Just as they did post the dot-com crash, the Fed rose to the rescue again by slashing interest rates and kicking off QE1 in March 2009. Gold saw this coming and bottomed out in October 2008, six months earlier. Then it rose another 180% to a record high at 1923 in 2011.

Fast forward to August 2018, when Gold bottomed at 1167 and then rallied to break the July 2016 peak, ultimately rising 42% until March 2020. This came seven months before the Fed announced in March 2019 that it was ending QT. Once again, Gold saw the writing on the wall, and it read “liquidity”.

In an interview in July 2020, I forecast that Gold and Silver would peak and fall hard starting in August, because the Fed had tapered its massive stimulus to ‘just’ $120bln a month in July and because August would see the end of emergency fiscal stimulus for the unemployed. This was based on the withdrawal of liquidity.

The consistent theme here is when the Fed prints new dollars out of thin air (also known as liquidity), cuts interest rates, and weakens the dollar, precious metals and miners soar. Combining both fiscal and monetary stimulus is like rocket fuel. The opposite happens when they curtail that stimulus.

The point being that perhaps the Banks are aware of a pending correction in stocks that will force the Fed and the Treasury to respond with stimulus on steroids. Hence their desire to get out of their short positions sooner rather than later. The Democrats have already sealed an additional $1.2tln in stimulus and are now negotiating on an additional $3.5tln, which would include a whole lot of giveaways to Americans in the form of more checks in the mail, UBI for no/low income households, free childcare, and so much more. All of which goes straight into circulation and not into bank reserves on the Fed’s balance sheet. The Fed will have to buy the new Treasury bonds to finance this new spending. All of which weakens the dollar too. All sound familiar? It should. We’ve seen this movie before.

Precious metals and miners are by no means done just yet, and the Bullion Banks’ desperation to get out of their short positions signals the next massive rally is coming sooner rather than later, imho. 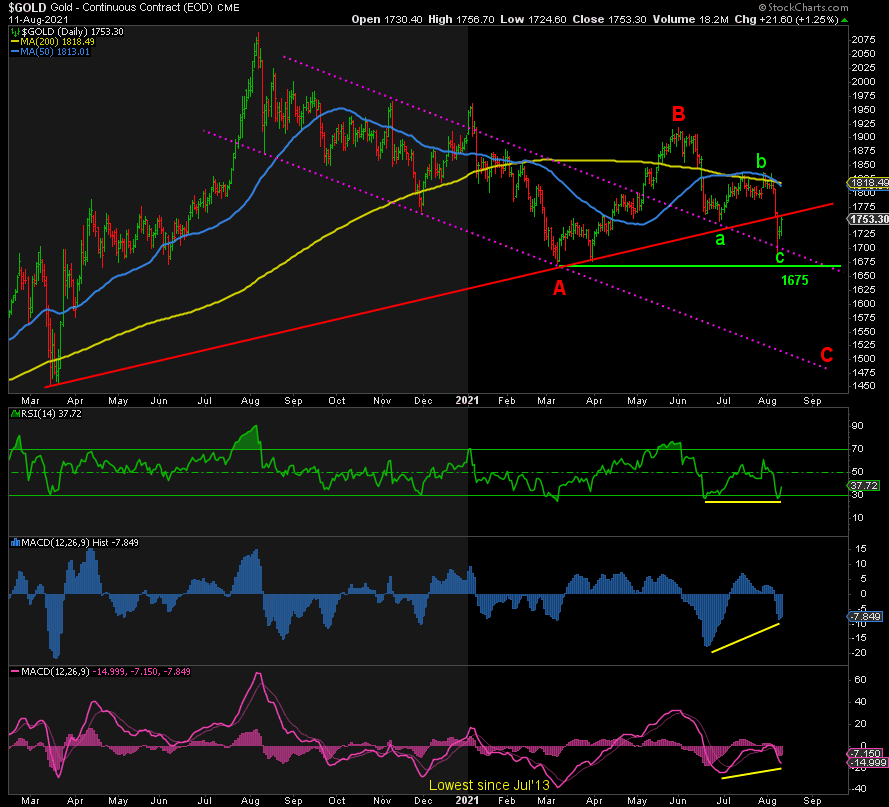 In the short term, Gold has staged a nice rally of the triple low of 1675. But now it has run up against its prior trendline support, now resistance in red, at ~1760. 1750 was also the prior low and former support level, making 1760 resistance on the way back up. 1760 also happens to be the 50% Fibonacci retracement of the recent decline from 1837 to 1675.

Suffice to say that we need to break back above 1760. To increase the likelihood that the bottom is in, we need to take out the prior high of 1837.

However, if this turns out to be just a bounce from oversold levels, then a break of 1675 could trigger a final flush lower.

We have our parameters in the short term, but the massive rally to come is inevitable, imho, unless the Fed wants to crash the system and collapse the Everything Bubble. Even then, Gold, etc.,  will likely outperform everything else in a deflationary spiral into the Greatest Depression. Precious metals are the new TINA: there is no alternative.