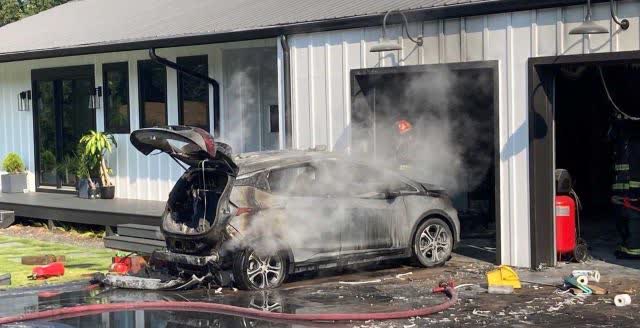 A GM Chevy Bolt after its fire was extinguished (image via Inside EVs).

If you own a Chevy Bolt, that is. It's no longer enough to find an empty spot: you need to find one that's at least fifty feet away from the nearest car. Why, you might ask? To reduce the chances of a fire from your car's spontaneous combustion spreading to other cars:

General Motors Co. urged some owners of Chevrolet Bolt electric cars to park and store the vehicles at least 50 feet away from other cars to reduce the risk that a spontaneous fire could spread.

The Detroit automaker has recalled all of the roughly 142,000 Bolts sold since 2016 because the battery can catch on fire. GM has taken a $1.8 billion charge so far for the cost of the recall and has been buying cars back from some disgruntled owners. The company expects to recoup much of the cost from battery supplier LG Corp.

The new advice is likely to rankle owners who are already limiting their use of the Bolt to avoid overheating the battery and risking a fire. The parking guidance — recommending a distance of 50 feet from other parked cars — is especially difficult for owners in urban areas.

The Bloomberg report goes on to note GM also advises Bolt owners not to park their cars in indoor garages, for similar reasons.

On his Slope of Hope blog, market technician Tim Knight drew attention to GM's chart, highlighting its similarity to the period just before GM's crash in early 2020. 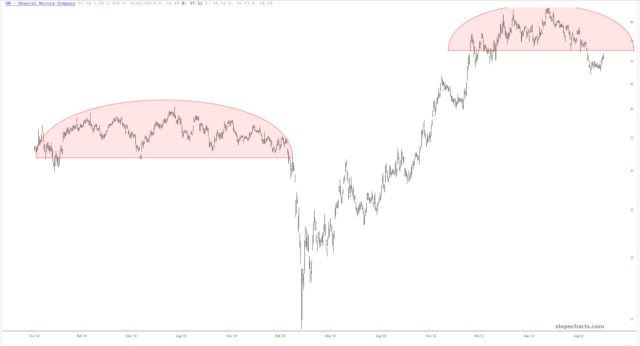 If spontaneously combusting Chevy Bolts and the chart above haven't dissuaded you from holding GM shares, maybe you will at least consider adding some downside protection. Here are a couple of ways to do so.

As of Wednesday's close, these were the optimal puts to protect against a greater-than-20% drop in GM by mid-March. 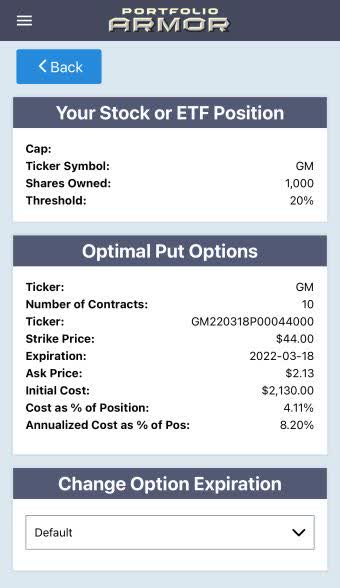 This and subsequent screen captures are via the Portfolio Armor iPhone app.

If you were willing to cap your possible upside at 15%, this was the optimal collar to hedge against the same, >20% drop over the same time frame. 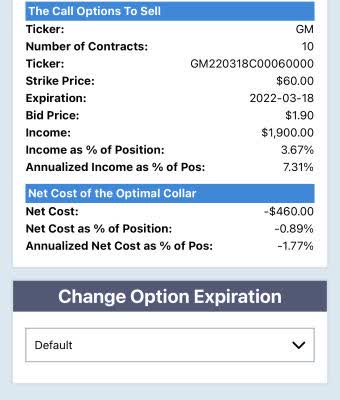 This time the cost was negative, meaning you would have collected a net credit of $460, or a little less than 1% of position value when opening the collar.

In both hedges, the cost of the hedges was calculated conservatively, using the ask price of the puts, and, in the collar, the bid price of calls. In practice, of course, you can often buy and sell options at some price between the bid and ask, so the cost would likely have been less in both cases (a larger net credit in the case of the collar).