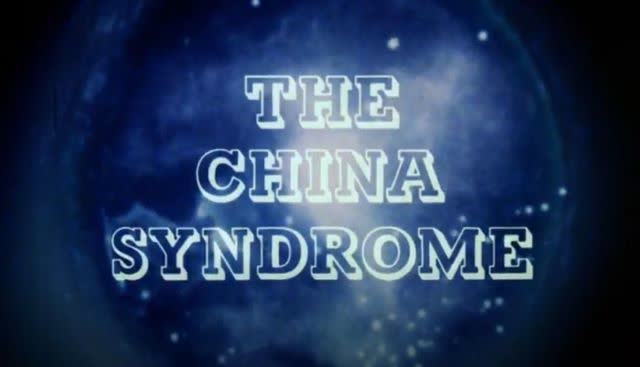 Still from the trailer for The China Syndrome (1979).

A Potential China Syndrome In Reverse

Forty two years ago, The China Syndrome terrified movie audiences with the prospect of a nuclear meltdown in the U.S. spreading to China; today, investors worry about a financial meltdown in China spreading elsewhere. The meltdown is the impending default of China's largest property developer, Evergrande, which has $313 billion in outstanding debt. ZeroHedge detailed potential for contagion in a post on Saturday ("This Is How Contagion From Evergrande's Default Will Spread To The Rest Of The World").

The Twitter thread below also sketches out how contagion could spread.

Previously, ZeroHedge had presented its nightmare scenario for the default, which would be an inverse of the 2008-2009 global financial crisis, this time without Chinese growth to quickly drag the world out of it. In the event that nightmare scenario comes to pass, here's a quick-and-dirty (and relatively cheap) way to hedge your portfolio on Monday.

For the purposes of this example, we'll assume your portfolio is worth $500,000, and that it’s closely correlated with SPY. We'll also assume you have enough diversification within it to protect against stock-specific risk, and that you can tolerate a decline of up to 20%. If you have a smaller risk tolerance, you can use the same approach entering a smaller decline threshold, Similarly, if you have a larger or smaller portfolio, you can adjust Step 1 below accordingly. If you have gold, bonds, or other asset classes in your portfolio, we'll address that at the end.

Scan for the optimal, or least expensive, puts to protect against a >20% decline in your number of shares of SPY at the options expiration you want. We've used our default time frame to expiration below; if you think the Evergrande situation will resolve itself sooner, then you can find cheaper protection by picking a sooner expiration date. 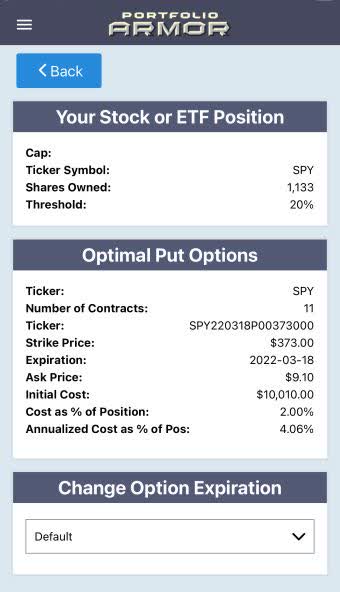 This and the next screen capture are via the Portfolio Armor iPhone app.

As you can see above, the number of options contracts the algorithm presented was 11. Since each options contract covers 100 shares, what our algorithm does when you enter a number containing an odd lot like 1,133 is this: it slightly over-hedges the round lots (the 1,100 shares, in this case), so that your entire position, including those extra 33 shares, is protected against the drawdown you specified.

Note the cost here: $10,010, or 2% of portfolio value. The app calculated that conservatively, using the ask price of the puts (in practice, you can often buy options at some price between the bid and ask prices).

Round up the number of SPY shares to the nearest 100 and repeat step 2. 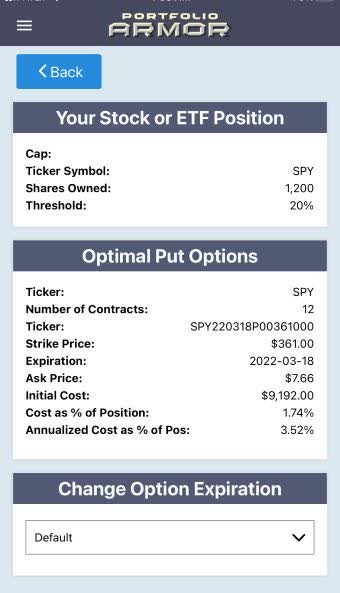 In our simplified example above, your portfolio was 100% stocks that were highly correlated with SPY. Let's say your portfolio includes a broader range of asset classes: 40% diversified stocks, 20% tech stocks, 30% bonds, and 10% gold. You could use the same approach as above using QQQ as the ticker for the tech stocks, TLT or LQD for the bonds (depending if they're Treasuries or corporates), and GLD for gold. So, in that case, you'd divide the dollar amount of your tech stocks by the current price of QQQ, etc.

A Contrarian Bet On China

If you're the type to buy when others are selling, in a previous post we wrote about a contrarian bet on China, the Aluminum Corporation of China, ltd (ACH), which was our #8 name on Friday. 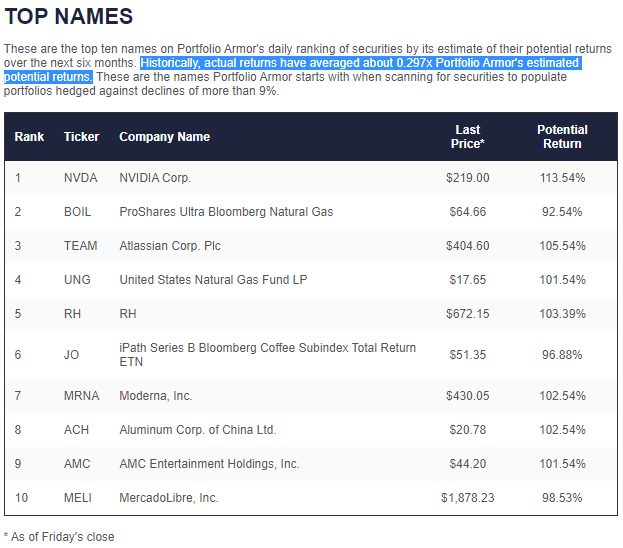 It might be more prudent to buy and hedge in this case though.

A quick housekeeping note: we're raising the price of our app and our website by a third this week. Those who have downloaded the app or subscribed to the site before then will be grandfathered and retain the current pricing.