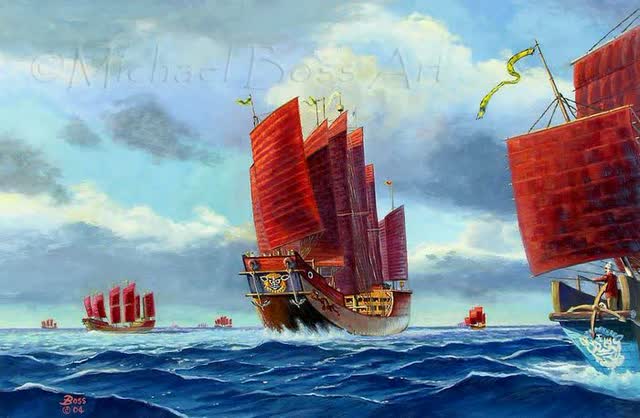 Zheng He and the Great Treasure Fleet. Painting by Michael Boss.

History Doesn't Repeat Itself But It Rhymes

Our fellow ZeroHedge contributing editor "Quoth The Raven" suggested in a recent post that China's crackdown on Bitcoin and other cryptocurrencies is motivated by her desire to avoid a "cataclysm" in crypto. Our correspondent Anatoly Karlin offers a different interpretation. First, a bit of historical background, then we'll repost Karlin's thoughts here. We'll close with a brief update on our "Swinging For The Fences" post.

The current age of globalization--and centuries of European dominance--essentially began in the late 15th century, with Columbus's discovery of the New World in 1492, and Vasco da Gama's discovery of a sea route to India in 1498. But it might have gone a different way.

When da Gama got to India, some of the Indians first thought he and his men were from China. They had heard tales from their elders about foreigners who arrived in giant ships in the early decades of the century. Between 1405 and 1433, China had sent "Treasure Fleets" led by a eunuch admiral named Zheng He across the Indian ocean, from Southeast Asia, to India, and to the east coast of Africa. 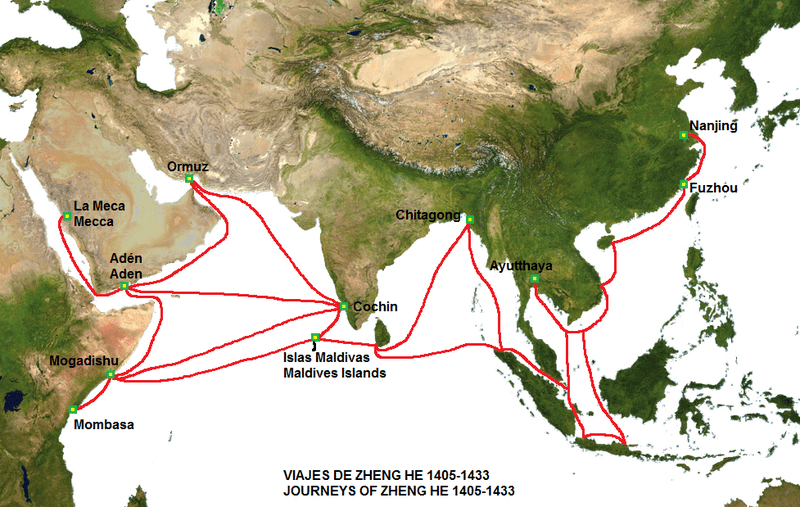 Zheng He's ships were actually much larger than the Iberian ships of the Age of Exploration. Below is a scale model comparison of one of Zheng He's ships and Columbus's Santa Maria. 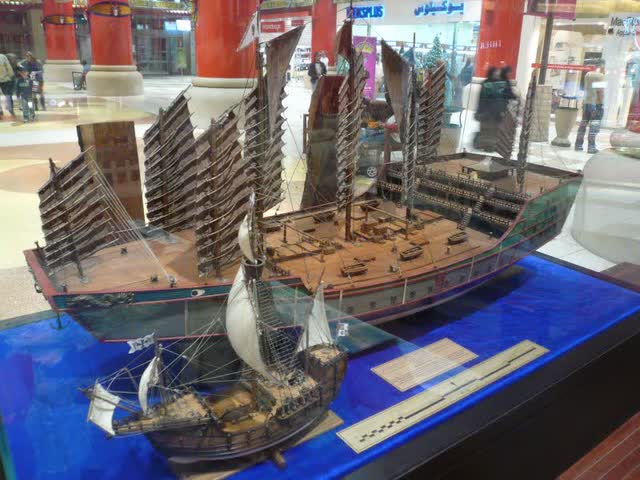 In the end, though the Ming Dynasty shut down the Treasure Fleets, and Spain and Portugal ended up discovering and colonizing much of the rest of the world, with other European empires following in their wake.

Anatoly Karlin sees parallels between China turning away from the sea in the 15th Century, and China cracking down on crypto (and gene-editing) today. From his blog (China Isn't Going To Make It):

I have been a long-term China bull since I began blogging. Proof (2008). A lot of what the Western media was writing about China were based on Sinophobic fantasies that had no correlation with reality. Just to be clear, I am still a China bull, at least in the sense that I’m sure its GDP per capita will converge to the levels predicted by its human capital, i.e. Japan/South Korea, giving it by far the world’s largest economy by mid-century. But I am increasingly skeptical about its ability to produce anything that is… really interesting/world-transformational.

It continues making top-down decisions that, as in centuries past, may curtail the ultimate scope of its civilizational achievements.

Several months ago, it made it illegal to create gene-edited babies. If enforced, this effectively takes China out of the biosingularity race. Conversely, the first gene-selected baby in the world was born a few weeks ago in the US (the father’s political views raised a minor journalistic furor).

Now China bans crypto. While “China bans crypto” stories have become something of a meme in the crypto community over the years, this latest one seems qualitatively different. They’re no longer just banning financial institutions from provisioning crypto services, trading them on leverage, or mining Bitcoin on account of its carbon costs and strain on the electricity grid. Those measures were defensible from a social and environmental point of view. This latest ban appears to criminalize the purchase of cryptocurrencies from overseas or even involvement in marketing or technical support related to crypto business.

There is a good chance that crypto and Web 3.0 will transform global finance, governance, and the Internet over the next generation in fundamental ways. Many of these transformations will be in ways that challenge or at least question the traditional prerogatives of the state as regards censorship, monetary emissions, and even legal sovereignty. But it is not a process that can be reversed top-down at the global level. Now, it will just just pass China by. Fred Reed waxes eloquent about the “digital yuan”, but why would anyone want to use a centralized stablecoin pegged to the yuan that’s controlled from the PBC given the variety of more discrete and already existing alternatives? China can certainly enforce it within its own borders. But in the outside world, you have Bitcoin on the Lightning network, now universally implemented in El Salvador and soon to be integrated into Twitter micropayments according to rumors. There are many other competing decentralized solutions on Ethereum and other chains, including stablecoins pegged to various currencies.

Long-term, the world economy has been defined by accelerating dematerialization. There is no reason to think that will stop anytime soon. Japan bet on hardware, but it was software that ate the world – with the result that Silicon Valley conquered global IT. Japan is now the poorest G7 country after Italy. All the top AI talent is in the US, as are the three leading AI research outfits (DeepMind, OpenAI, Google AI). Tesla and SpaceX are American. Its Woke drama and government dysfunction are spectacles that conceal ineluctable American strength across the global O-Ring sector. Meanwhile, China is making it a priority to manufacture semiconductors at the density achieved by TSMC (which are built using Dutch machines). No doubt a very important undertaking. The technological equivalent of grinding in video games.

These Chinese decisions remind me strongly of the famous “sea bans” (haijin) pursued under the Ming and the early Qing involving bans on maritime trade and ship construction. Intermittently issued, ineffectively enforced, trivially circumvented by the pirates and smugglers it was putatively aimed against – who were often aided by local officials in return for part of the spoils. The treasure fleets rotted away in their harbors and a few centuries later Europeans overspread the world. History doesn’t repeat, but it rhymes.

In a recent post (Swinging For The Fences), we posted a $100,000 portfolio for a very aggressive investor. One of the hedged underlying positions was in the ProShares Ultra Natural Gas ETF (BOIL). A reader, noting its leverage, suggested the United States Natural Gas ETF (UNG) as an alternate play on the commodity. As we noted then, our system was bullish on both. As you can see below, both ETFs appeared among our top ten names on Friday. 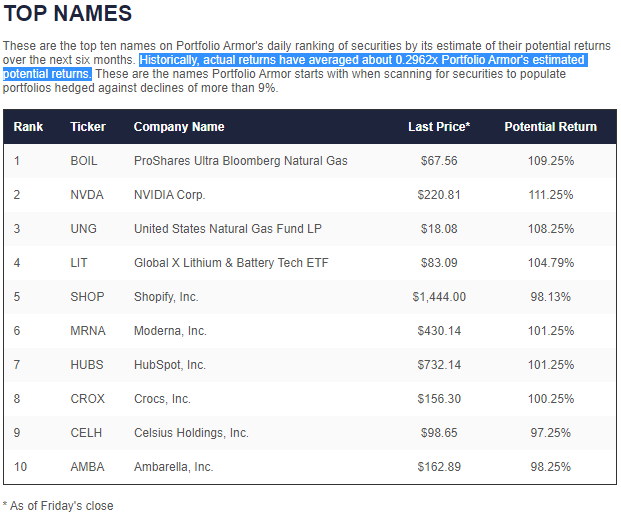 BOIL first hit our top names in July, and has performed well since, as you can see below.

UNG started appearing in our top names earlier this month.