“Fascism should more appropriately be called Corporatism because it is a merger of state and corporate power.”

Like a child with spaghetti, the US corporate state made a mess of libertarian ideology.

Other Western political cultures do not recognize the exceedingly awkward and cowardly simplistic US version of corporate libertarianism, which goes something like:

Unlike some ideologies, libertarianism need not necessarily deal in the black and white. As humans gifted with free thought and the capacity for reason, we should be also capable of nuance. Each of these propositions can be true in any given context:

… In short, the corporation, like fire, makes for a useful tool and a dangerous enemy.

The executives of any given corporation are tasked with maximizing profit above all. Public executives, in fact, have a legally enforceable fiduciary responsibility to maximize profit as their primary function. In and of itself, this is a morality-free imperative, neither inherently right or wrong; it is only the nature of the beast.

What does a corporate entity have to say of human liberty? Nothing – not now, not ever. Profiteering is the ethos, nothing more.

If maximal profits are to be made in a free society, so be it; if maximum fortune is to be mined from a sea of enslaved zombies, just as well – it’s all the same to the shareholders.

Here, in 2021, the interests of the state and corporations converge – so that it doesn’t matter which entity forces the adoption of “vaccine passports”:

“At least 17 [US] companies or nonprofits are developing websites or apps that might be used by sporting venues, restaurants and other businesses seeking to keep their customers and employees safe, according to… the executive director of the Health Innovation Alliance, a broad coalition of health providers, tech companies, employers and insurers.”

Ask yourself: if you can’t work, send your kids to school, fly on an airplane, cross borders, or even potentially shop at grocery stores without a “vaccine passport” (as CNN recently suggested), does it matter whether the state or a private corporation develops the app and runs the program?

The end result is the same: a dystopian hellscape void of any meaningful human freedom.

The Modern US ‘Free Market’ Is Delusional Fantasy

What fruits does a system bear when it allows the corporate state to rig the rules of the game in its favor? Runaway profits for a small handful of politically-connected conglomerates inconsistent with the growth of the overall economy. 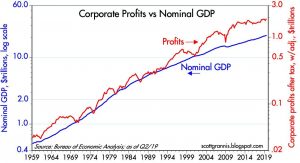 In 1994, Congress passed the multinational trade agreement NAFTA that essentially allowed multinational corporations to rig the economy in their favor (incidentally, which Donald Trump ran in opposition to in 2016 and won on).

As the graph above indicates, corporate profits skyrocketed precisely at this moment in history while once-great American industries, especially manufacturing in the Midwest, atrophied:

“Negotiated behind closed doors with hundreds of official corporate advisors, NAFTA was radically different than past trade deals that focused on traditional trade matters, like cutting border taxes. Instead, most of NAFTA’s provisions grant new powers and privileges to multinational corporations… The U.S. government has certified more than 980,000 American jobs… NAFTA has also lowered U.S. wages, increased inequality, and hurt U.S. manufacturing and wiped out small farmers in all 50 states.”

The slow death of the American middle class

No one you know – in your town, in your family — voted for NAFTA; the decisions were rendered by Washington officials whose campaigns are funded by the very same interests (often in secret via “Dark Money”) that stood to benefit from its passage.

So they did what their donors wanted them to do.

The last 30 years was no “libertarian” victory; it was a huge win, rather, for an offshore oligarchic elite with no allegiance to American prosperity — other than as a vehicle to parasitically generate more wealth for itself — or to any conception of  a “free market.”

It turns out, when a population hands over the reins of power to a handful of unelected elite, they abuse it. Such was the case in the waning days of the Roman Empire, of the Bolsheviks and Maoists of communist fame, and the of petty tyrants of history from Iraq’s Saddam Hussein to the Philippines’ Rodrigo Duterte.

In this narrow regard, the espoused political ideology of decadent and corrupt power structures, whether socialist or Ba’athist, runs the gamete and is ultimately irrelevant.

Markets are tools a free people use to generate abundance and to organically allocate finite resources most efficiently based on merit and effort — not unknowable, mystical entities to be worshipped as deities. 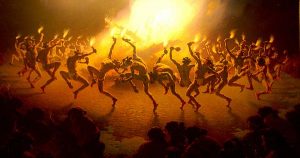 Liberate Yourself From Ideological Possession

Jordan Peterson on a phenomenon he coined “ideological possession“:

“About the necessity for consistency in ideology, it’s like, I’m not hearing what you think. I’m hearing how you’re able to represent the ideology you were taught… I could replace you with someone else who thinks the same way. And that means you’re not here… And that’s the pathology of ideological possession… It’s like, why have a conversation? I already know where you stand on things.”

Refuse the role of playing anyone’s fool – least of all, for the sake of Bill Gates or Jeff Bezos.