At The Daily Bell, we’ve faithfully debunked the corporate media’s unending fake news campaign to push the preferred storyline(s) of its owners.

However, despite the impressive absurdity of everything from Jussie Smollett’s midnight Subway© lynching hoax to the “safe and effective” vaxx narrative, none has detached as fully from reality as the corporate media mythology surrounding the Kyle Rittenhouse shootings.

The Rittenhouse fiction serves as a microcosm of the fruits that propaganda machine — which furnishes rhetorical cover for the well-funded BLM/Antifa/corporate state alliance — has bore.

Last year at the height of BLM rioting (or “protesting,”*), cities across the US burned for months on end.

(*The corporate media would have you believe that burning 150 buildings (mostly locally-owned small businesses) and damaging and/or looting 1350 more that had nothing to do with policing, government policy, or the George Floyd killing is somehow mere “civil disobedience” in the tradition of MLK.) 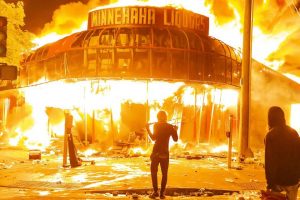 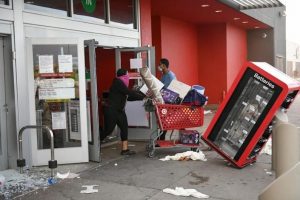 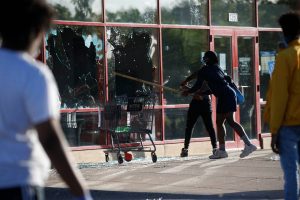 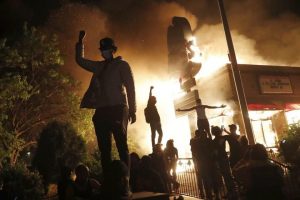 Above: civil rights heroes in action

Then, a few months later in August 2020, essentially the same series of events the next state over:

CNN described the whole scene in Kenosha as “fiery but mostly peaceful”:

The aftermath of the “mostly peaceful” protests:

Putting aside the common dilemma of reconciling destroying small businesses in your own community with protesting police abuse, here are the nonsense talking points specific to the Rittenhouse case.

The Big Lie #1: The Advent of the ‘He Crossed State Lines’ Narrative

The immediate talking point, which has become a parody of itself, emerged: “He Crossed State Lines” (spoken in exasperated, utterly uncomprehending tones).

How could he? The monster! The absolute deplorable white supremacist savage!

Crossing state lines?? Not in America! Not in the land of MLK!

The initial cause for the talking point was the Rittenhouse (reportedly) crossed state lines with an AR-15 weapon, one which he (reportedly) could not legally possess.

Both claims turned out to be lies:

Despite the above undisputed facts that emerged during the criminal proceedings, the corporate media didn’t bat an eye.

On the contrary: they pushed the “he crossed state lines” narrative even harder, with increasing desperation, over time. Why? A few reasons, perhaps:

Crossing state lines has never been illegal in the Unites States. In fact, that’s the entire premise of the UNITED States – free passage between union members.

Rittenhouse also lived literally a mile from the state line. The drive from his mom’s house in Antioch to Kenosha took 30 minutes. 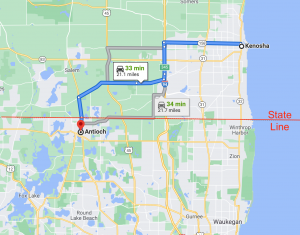 While pandering to the woke vote to get elected, Biden in 2020 smeared Rittenhouse as a “white supremacist.”

Smearing political opponents as “white supremacists” is now so commonplace that no one batted an eye – except, perhaps, Biden’s personal lawyers who realized he opened himself up for a defamation lawsuit.

After the verdict, Biden initially told reporters he respected the jury’s decision.

After his handlers got to him, though, they wrote a statement in his name** which reads: 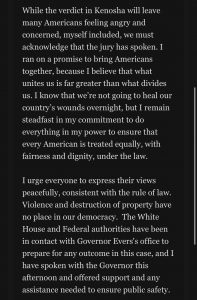 **Notice the careful arrangement of the phrase “many Americans feeling angry and concerned, myself included”.

The two-fold purpose is to simultaneously:

Jury Intimidation 101: The Neoliberal Tactics to Bully the Justice System Into Submission

The judge in the Rittenhouse trial booted MSNBC from the Kenosha courthouse for the duration of the trial after their camera guy got caught stalking the jury during transportation to and fro the campus in an apparent attempt to snap their photographs.

BLM and Antifa protesters/latent rioters also camped out around the complex throughout the process hoping to intimidate the jury into ruling the “right” way.***

Given their previous activities, the obvious implied threat is that Kenosha would burn if they handed down the “wrong” verdict.

***These are the same tactics Maxine Waters and the racialized mob she whipped up on the Minneapolis streets during the prosecution of the cop, Derek Chauvin to tilt the scales of justice via intimidation into delivering her funders’ preferred outcome.

And then Hasan Piker, Cenk Uygur of the Young Turks’ nephew and the ultimate nepotism beneficiary, tweeted this: 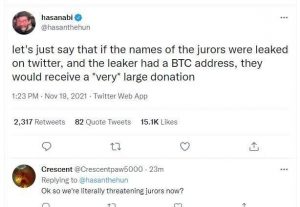 That Rittenhouse got out of the debacle – in spite of the truly relentless lies, smear campaigns, and jury intimidation — is a minor miracle. As we all, know, though, the BLM/Antifa/corporate state machine will be back in business real soon, more dogged than ever.

And they’ll come for your sons and daughters next.