The Nu variant arrived just in time for the holidays.  The Nu variant is the most mutated of all viruses clocking in with 32 mutations and some have reported up to 50.  This means it is highly evolved, should increase transmission, and is very likely to be vaccine-resistant.  For these reasons the WHO is calling for a special meeting today. The futures falling over 800 points in the Dow premarket tells us that this is a big deal and it looks like the genie is out of the bottle.  The likely result of the WHO meeting will be that they will be watching it very closely and try to compile more data and do their best to contain it.  In one day they called it a variant of concern with less than 100 confirmed cases.  They might even tell people not to panic, but what do people do in a situation whereby there are no tools to adequately control the spread of the disease. 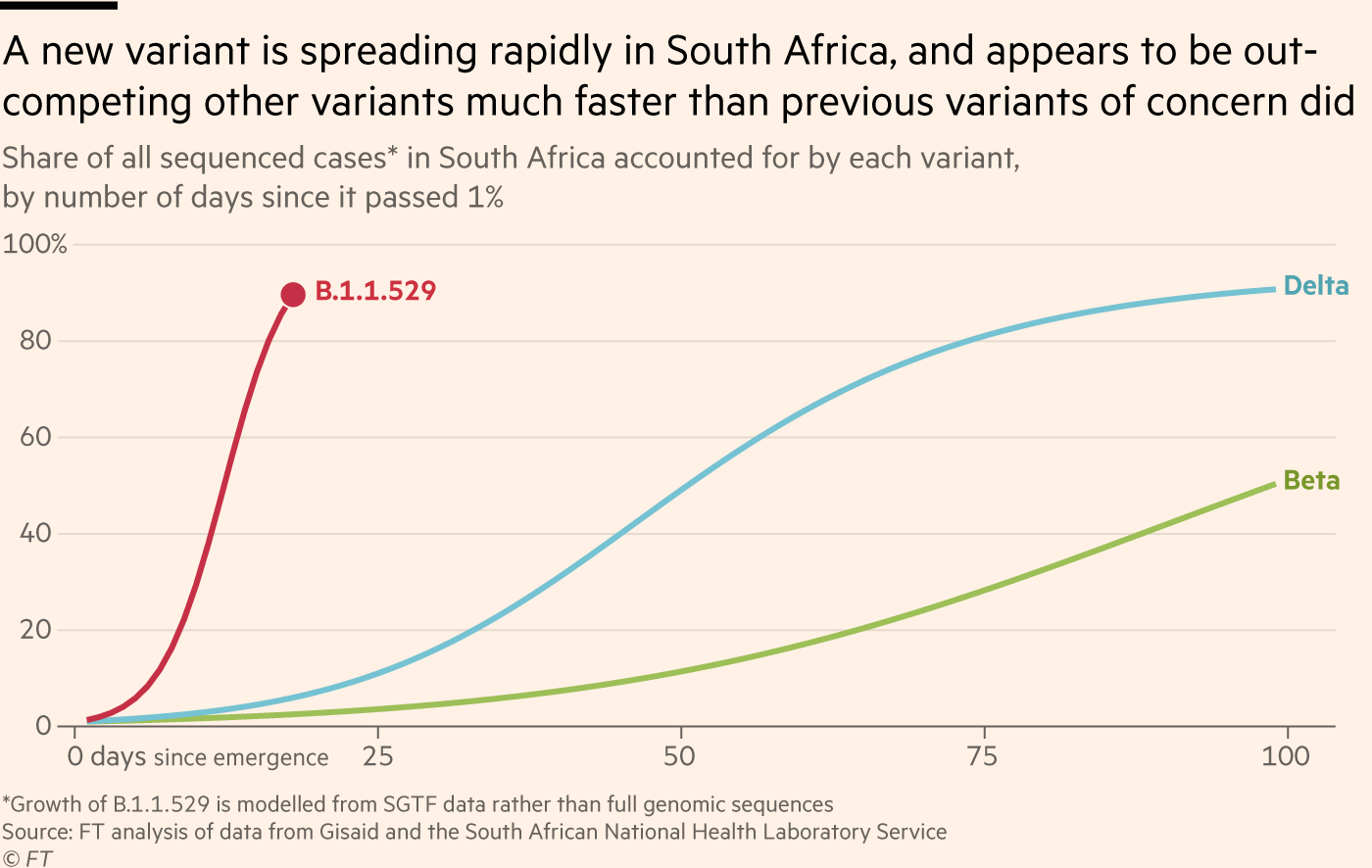 The testing infrastructure was dismantled in the United States.  That was a Trump policy of “test, test, test” then it suddenly stopped.  Just this week reporters blew open the story that policy makers advised against testing asymptomatic people.  In schools, do they perform contact tracing when a student is sick?  Do they test for the type of variant?  Government dollars no longer support testing and it’s a barren landscape in testing with few players left in the game.  Without adequate testing, it is difficult for scientists to know what society is up against, and it is much more difficult for policymakers to make rational, informed decisions. That lack of testing spilled over to breakthrough infection reporting where the number of cases were skewed to only report hospitalizations. Not compiling this data obsugated the waning immunity of the vaccines.  In mid May the Delta Variant cases exploded and became dominant in about 2.5 months.  Looking at the chart above, the trajectory on the Nu variant is closer to 30 days.  Without a testing infrastructure, once it hits our shores, we have nothing to contain it and it’s probably already here.  The surge in Michigan and unconfirmed reports of very high percentages of breakthrough infections could be explained by the Nu variant.

The Biden administration was myopically focused on the vaccine only strategy. Remember, just months ago, this was a “pandemic of the vaccinated.” Then there was a large rise in the number of breakthrough cases that led to the booster policy.  The booster policy was based on 2 months of data and less than 500 people, instead of utilizing the EUA-approved cPass test that quantitatively measures the levels of neutralizing antibodies needed to fend off the Delta variant. By not following through with the vaccines to achieve herd immunity throughout the world, and by largely ignoring the safety nets of antivirals and other therapies until now, it essentially condemned the world to another variant.  This Nu variant is the achilles heel of that failed vaccination strategy.

Scientists believe that the Nu variant came from an undiagnosed HIV patient.  This was quite predictable given some of the case studies of prolonged COVID-19 battles in immunocompromised patients.  In a science article a cancer patient with a long battle with cancer and COVID-19 saw her virus mutate at least 3 times.  The article explains

“the virus developed mutations that are hallmarks of the Alpha, Gamma, and Delta variants of SARS-CoV-2, none of which had yet taken hold in the general population.”

This patient was battling COVID-19 for one year. But she isn't the only case study as mentioned in the article.  What these case studies highlight is the need to eliminate these breeding grounds for new variants coming from the immunocompromised. The only way to do it is with early treatment, and vaccines are not a treatment.  So that singular “vaccine only” focus has led to the downfall of the vaccine only strategy.

People that are immune compromised can have an active form of the disease for a prolonged time which allows the virus ample time to mutate and get around all the treatment options that are being tried.  Known mutagenic drugs that help increase the number of mutations like Gilead Sciences’ remedesivir or Merck’s monulpiravir in these patients can actually aid in the development of variants and cannot be given carte blanche without testing to ensure the virus isn't mutating.

The only tool we have left to combat the Nu variant right now are the oral antivirals. Stepping up the vaccine effort is futile because it does nothing to stop the spread if your neutralizing antibodies aren't strong enough to knock down the disease early.  Many people don't realize that the vaccines were all developed early for the first version of the disease before the variants started coming.  The public may not realize that the Nu virus is a completely different disease.  We can’t use spears and stones to fight this next variant; we need better weapons.  Science has demonstrated that the body needs a very high level of neutralizing antibodies to ward off the Delta variant and that only comes from a recent vaccination, the booster shot, or from acquired immunity from contracting the virus.  With the Nu variant it is expected that only those with highly active antibody responses will be able to ward off the disease with what they call sterilizing immunity. Unless we do more testing we won't know what's effective for the next couple of months.

The best hope are the 3CL protease inhibitors currently in the clinical trial process.  Pfizer with its oral antiviral Paxlovid is the closest to approval. It is a 3CL protease inhibitor and works early in the disease and showed an 89% reduction in mortality.  The only issue is that there appears to be some sort of deflection by the drug maker when it comes to the safety of the drug.  In order to combat the higher viral load of the Delta variant they put it in combination with an HIV drug called ritonavir which has a black box warning label.  Their drug metabolizes quicker and the HIV drug they combine it with, called ritonavir, helps it stay active in the body longer by slowing the metabolism.  It is absolutely the right target to hit for early disease but the safety issue really hasn't been resolved.  Research shows that the 3CL protease is one of the first things a virally infected cell makes.  Pfizer did a great video posted on www.covidviruslifecycle.com and it explains the mechanism of action of their pill. The other thing recent research has uncovered is that these proteases developed in the initial stages of cellular infection turn off the cell protection and ability to alarm other cells, so the 3CL protease has become a more desirable target than other viral proteins because it can help the immune system do its job.

Another 3CL protease inhibitor is being developed by Todos Medical.  They have a phase 2 readout of their 3CL protease inhibitor called Tollovir in the coming weeks before Christmas.  They have an all-natural 3CL protease inhibitor which means that it is not likely to have side effects if the dosage is increased to combat the expected higher viral load of the Nu variant. In an exploratory study of hospitalized patients no one died versus a 23% mortality rate in a similar group.  They also drastically reduced CRP which is an inflammatory biomarker.  Like Pfizer and Merck, they are expected to have a 100% mortality benefit but what is different is that their drug can be taken later when people are hospitalized and still bring them back because their drug also contains anti-inflammatory properties.  The company also confessed in a recent interview that the active ingredient in their drug is also found in their widely available dietary supplement that can be purchased on amazon.com. They call it Tollovid. It didn’t take social media very long to connect the dots to COVID-19. 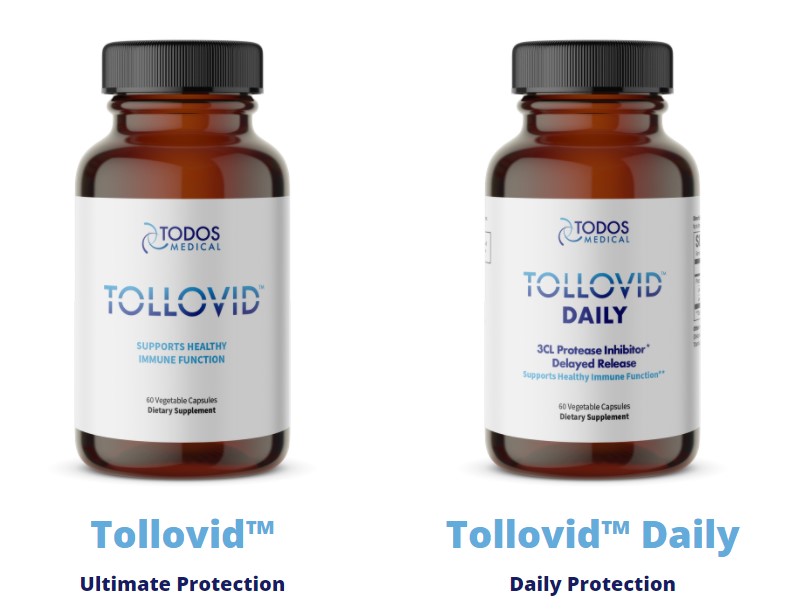 The 3CL protease inhibitors by Pfizer or Todos are the best immediate hopes to combat this emerging threat.  When the clinical trial data from Todos are released in the coming weeks it is expected to confirm their observational study and the DSMB may follow the same recommendation they gave to Pfizer which was to apply for an EUA. So while many wait on news of the Pfizer drug approval, it's only for the unvaccinated people and those with underlying conditions. The Todos drug, Tollovir, contains no such restrictions but we have to wait what the DSMB and FDA say in the coming weeks.  In the interim, the only thing concerned people can do today is buy the dietary supplement, Tollovid, to protect them in case of infection. If people are concerned that they might have no protection against the Nu virus then a dietary supplement made of the active ingredient of the 3CL protease inhibitor may be exactly what the doctor ordered.

Therapeutics have taken a back seat for far too long.  Many therapies are just sitting on the shelves waiting to complete their clinical trials so that they can get approval.  In the critical COVID-19 setting drugs like leronlimab and ampion which clearly demonstrated efficacy have yet to finish their trials to the FDA’s satisfaction.  Perhaps this Nu variant will give the FDA renewed impetus to approve drugs that clearly work but don't have perfectly designed trials as is the case with CytoDyn’s leronlimab and Ampio Pharmaceuticals’ ampion. There are other very promising drugs in development that were sidelined by the vaccine craze that took money away from promising therapeutics.  Therapeutic drugs like ProLectin-M that target the virus itself are awaiting funding.  Complete viral elimination, not reduction, in 5 days using a very safe class of drugs called galectin inhibitors would be a good step toward defeating COVID-19.  The recent surge of COVID-19 might get therapeutic candidates the attention they need to get the proper funding to complete their trials and end this cycle of variants.  Therapies (that aren’t neutralizing monoclonal antibodies) are agnostic to variants so once the world finds one that is effective these cycles may finally stop.  In the interim these 3CL protease inhibitors are the best chance we have as a planet to quell the Nu variant.  It's incumbent on us to make sure your policy makers know about these therapeutics and hope that the FDA authorizes compassionate use of some of these critical therapies that can take dying off the table.