If you’ve been paying attention, you might’ve noticed a corporate-state media blitzkrieg pushing “meat alternatives” for the past year or so.

The technocratic elite have decided not to fill the “useless eaters'” (as they perceive you) slop troughs with meat any longer– allegedly for your own health and, of course, for the environment:

If, after the endless propaganda to shoot up the entire population with a dangerous and ineffective experimental mRNA gene therapy technology to fight a virus with a 99%+ survival rate, you still believe any Western government cares about its citizens’ health, God help you. 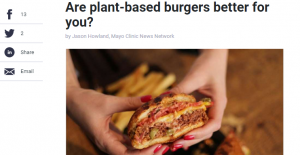 “This is an opportunity to allow someone who enjoys meat to have something that is similar to that, yet is less impactful on the environment.”

Part and parcel of the propaganda campaign is an attempt to convince the public that somehow protein intake – a critical macronutrient made of amino acids predominately found in animal products — is a byproduct of “diet culture” and overrated:

“‘Protein is diet culture masquerading as something that fuels exercise,” says Eve Simmons of the blog Not Plant Based… ‘In reality, most of us aren’t doing the exercise that is necessary to [require] that much protein.’…

‘There’s a paranoia about protein,’ says Jennie Macdiarmid, professor in sustainable nutrition and health at the University of Aberdeen, ‘and the market is creating and fuelling this demand.'”

Shocker: a vegan blogger and “sustainable nutrition” university professor agree that no one really needs that much protein after all.

In addition to the other benefits of choking off the meat supply, there is, of course, the profit motive of the biomedical technology sector. As anyone might expect, Bill Gates has made big investments in the “synthetic meat” industry:

“Mr Gates, who has invested in range of ‘synthetic meat’ startups including Impossible Foods, Beyond Meat, Memphis Meats and Hampton Creek Foods… says using regulation to force a shift to synthetic meat is only one of a wide range of government policies that will ultimately be needed to avoid a climate disaster.”

One might ask next: how will he “force the shift” exactly when the peasants refuse to buy his Beyond Meat Impossible Burger?

He will weaponize the regulatory levers of the state to institute a draconian meat tax, which his marketing people have dubbed a “green premium” under the auspices of protecting the environment:

“Eventually, that green premium is modest enough that you can sort of change the [behavior of] people or use regulation to totally shift the demand.”

Essentially, the social engineers will force-feed you and your family their “plant-based meat” by taxing actual meat out of economic reach for the average person (among other tactics) — all the while raking in the cash from a newly-minted “synthetic meat” industry.

Then, on top of that, they will generate even more revenue through the medical-industrial complex when they sicken the population with their Franken-meat. As a remedy, they will provide sickly “synthetic meat” consumers with pharmaceutical “solutions” to the problem they created in the first place through their manipulation of the food supply.

Such is the problem-reaction-solution paradigm.

Scams on top of scams.

“‘You can get used to the taste difference, and the claim is they’re going to make it taste even better over time’…  Mr Gates does not claim to be vegetarian and is reported to still enjoy the occasional cheeseburger.”

In addition to the tax and regulatory schemes, the social engineers also cynically employ appeals to “health” and “environmentalism.” Dr. Stewart explains how the UK has already achieved a 17% reduction in meat consumption in the last decades on the heels of a well-orchestrated propaganda campaign:

“For example, if you’re at a restaurant, you often see a vegetarian options ‘box of shame’ at the bottom of the menu rather than at the top with chef’s specials… so we can tailor public health policies and behavioural nudges to help people choose more sustainable options.”

From here on out, it’s only GMO Franken-veggie “burgers” by way of Monsanto and insects (probably mass-produced on some Third World plantation): 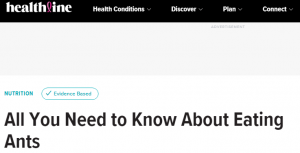 “The most commonly consumed insects around the world are beetles, caterpillars, bees, wasps, and ants. Ants specifically offer an environmentally friendly source of quality protein…

In recent years, finding sustainable ways to increase food production to feed the world’s growing population has been a concern. As edible insects, ants may become part of the emerging trends focused on providing healthier and more sustainable diets. Insects in general are considered a sustainable food source due to their low environmental impact…

Insects’ high protein content has raised interest as an alternative to milk, meat, fish, and eggs for human consumption.”

“Big food producers are betting they’ll soon welcome crickets, beetles, mealworms, and maggots to the mix as well. ‘Everyone is looking at the environmental impact of sourcing food, so there’s a lot of growth potential.'” 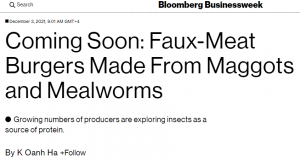 As we’ve previously explored, you are not in Kansas anymore. Welcome to Big Pharma Techno-Hell; we’re all along for the ride.

Now, scientists want to genetically mutilate your immune system with gene therapy to make you allergic to meat — for the environment.

What was once speculative science fiction is now doable reality. Moderna and Pfizer have already shown proof-of-concept in terms of mass genetic manipulation at scale under the guise of public health.

What follows is just the next logical step along the path:

“A new paper to be published in Ethics, Policy & Environment proposes a series of biomedical modifications that could help humans, themselves, consume less. Some of the proposed modifications are simple and noninvasive. For instance… individuals could take a pill that would trigger mild nausea upon the ingestion of meat, which would then lead to a lasting aversion to meat-eating.”