Risking War With Russia Over Ukraine

The conflict in the Ukraine has seemingly been on the backburner for years, but recent events raise the possibility it could become acute. In a nutshell, Russia is adamant that Ukraine never be admitted to NATO (an alliance whose raison d'être ended when the Soviet Union dissolved thirty years ago), and the U.S. refuses to promise it never will be. Computer scientist, attorney, and foreign policy commentator Clint Ehrlich laid out the current situation in a thread over the weekend. We've posted it in full below, followed by a comment about limiting risk in light of it.

In a previous thread, Erhlich pointed out that American troops are already on the ground in Ukraine as military advisors.

Limiting Risk In Light Of This

In our previous post, we included a method of hedging market risk in light of inflation risk. But what you're doing when hedging in this way is protecting against the risk of the market dropping, not the cause of it dropping. So if the market plummets due to fears of persistent inflation or due to fears of war with Russia, this approach will work the same way. For that reason, we have reposted it below.

Here's a simple way of protecting a $500,000 stock portfolio against market risk using optimal, or least expensive, puts on the SPDR S&P 500 ETF (SPY). You can use this approach with a $50,000 portfolio or a $5,000,000 portfolio too: just adjust the dollar amount you use in Step 1. For the purposes of this example, we'll assume your portfolio is closely correlated with SPY, that you have enough diversification within it to protect against stock-specific risk, and that you can tolerate a decline of up to 20% over the next few months (if you have a smaller risk tolerance, you can use the same approach entering a smaller decline threshold).

Scan for the optimal, or least expensive, puts to protect against a >20% decline in 1,076 shares of SPY over your desired time frame. Here, I've used our default setting, which is to scan for optimal hedges expiring in approximately six months. 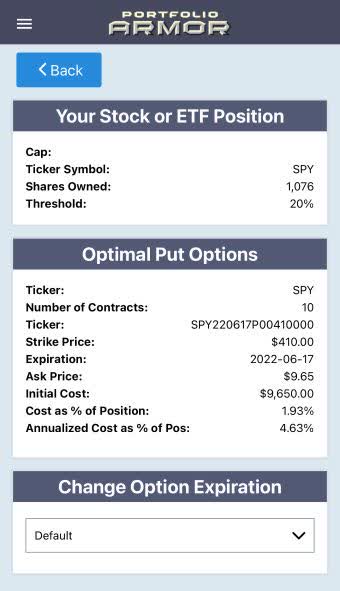 This and the subsequent image are screen captures from the Portfolio Armor iPhone app.

Note the cost here: $9,650, or 1.93% of portfolio value, which was calculated conservatively, using the ask price of the puts (in practice, you can often buy options at some price between the bid and ask prices). That worked out to an annualized cost as a percentage of portfolio value of 4.63%.

Round up the number of SPY shares to the nearest 100 and repeat step 2.

What About Your Bonds?

You can use the same approach as above, substituting a bond proxy for SPY. So, for example, the iShares 20+ Year Treasury Bond ETF (TLT) for long-dated U.S. government bonds, the iShares iBoxx $ Investment Grade Corporate Bond ETF (LQD) for corporate bonds, etc.