“First they came for America’s Frontline Doctors (AFD), and I did not speak out – Because I was not a doctor.

Then they came for the podcasters, and I did not speak out—
Because I was not a podcaster.

Then they came for the Substackers, and I did not speak out—
Because I was not a Substacker.

Then they came for the Jews, and I did not speak out—
Because I was not a Jew.

Then they came for me.”

Despite the near-total consolidation of the corporate media, COVID counter-narratives still leak out through a few (mostly online) independent outlets – most notably Substack.

Moving forward, expect a lot more hitpieces like the recent one below targeting independent journalists on Substack and similar platforms:

“Imran Ahmed, chief executive of [Center for Countering Digital Hate] said companies like Substack were under ‘no obligation’ to amplify vaccine scepticism and make money from it. ‘They could just say no. This isn’t about freedom; this is about profiting from lies … Substack should immediately stop profiting from medical misinformation that can seriously harm readers.'”

(The absurdly-named Center for Countering Digital Hate, along with the Southern Poverty Law Center and Anti-Defamation League, is the industry leader in “non-profit” pro-censorship campaigning groups.)

Her Grace of the Royal House of Clinton, Princess Chelsea, weighed in:

Similarly, Rolling Stone and other mainstream outlets have targeted Joe Rogan – who, in a devastating combination, is both the most popular podcaster in the world and fully off the liberal plantation:

As it turns out, though, “Only 87 of the 270 signatories are medical doctors – the rest are from assorted professions including engineers, teachers, psychologists.”

The entire “responsible doctors vs right-wing disinformation” narrative is a lie. Talk about a problematic hate-fact!

Another of the corporate media’s pervasive lies bites the dust, and Joe Rogan is still woefully on the web despite being a transphobic conspiracy theory-monger!

The oligarchs have a dilemma on their hands – one which they have undoubtedly deliberated upon ad nauseam behind closed doors for decades now.

…the internet is necessary and useful for creating a fully integrated physical-digital synthesis under a technetronic control grid. Some have termed this merger as the benign-sounding “internet of things”:

By combining these connected devices with automated systems, it is possible to ‘gather information, analyse it and create an action.'”

The endpoint is that you won’t be able to take a shit without your Silicon Valley overlords monitoring your output – literally:

It turns out that you can detect compounds that are diagnostic of exercise [show you have done some]; you can see when an over-the-counter medication comes into the system and clears out; you can see molecules that correlate with how well you slept, how much fat you had in your diet, what your calorie intake was.”

Accordingly, “switching off” the internet just isn’t in the cards; it’s not practical but, beyond that, it’s not desirable from the technocratic perspective (the only one that matters for matters of governance).

On the other hand…

Industrial-scale data gathering/tracking obviously requires some level of free information flow. For the system to work reliably, accurate data must zoom from place to place in real-time. Otherwise, the machine breaks down.

So the question becomes: how much free, accurate information is too much?

Can the technocrats turn the spigot on and off at will, allowing only the bits of information they want to travel via the IOT and barring others that might harm their agenda?

Therein lies the crux: how to engineer mass information distribution sufficient to support the control grid but simultaneously managed to exert effective control over what the slaves hear and see?

The reason, for example, the Vietnam War ended when it did – despite the best efforts of influential war criminals like Henry Kissinger to see it carry on ad infinitum – was the widespread, unprecedented access that normal Americans had to wartime images and videos. They conveyed the horror, along with the utter senselessness, of that campaign.

As a consequence, the American public turned against the war waged in their name en masse.

And that was before the internet.

The technocrats have no easy solution, as we’ve seen with the COVID narrative implosion in the early part of 2022.

Even with unprecedented collusion between multinational corporations, transnational governing bodies like the UN and WHO, national governments (to the extent that they are still key players), and the corporate media that serves the interests of the multinational elite, they still couldn’t keep the story straight for more than a brief clip. 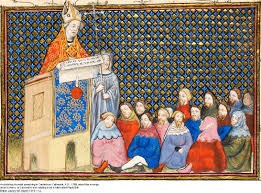 In an earlier time – in the Dark Ages when only the Latin-speaking priest class, who functioned as gatekeepers, had access to the Truth© — they might have been able to keep the rabble in the dark. But not anymore; dissidents now have too many available tools to disseminate countervailing messages.

Of course, the corporate media succeeded in propagandizing some subsection of the population into catatonic fear-induced compliance. They’ll swallow like the Gospel literally whatever slop Neoliberal Church High Priestess© Rachel Maddow dishes out, no matter how absurd.

However, given the pervasive and relentless messaging like the above from Maddow for the past two years, we might safely assume that the COVID hysteria holdouts are simply too mentally tough to fall prey to the deception. In perhaps a similar way, a subsection of the population is effectively immune to hypnosis.

If we haven’t taken the bait yet, we never will – no matter how many Substacks they purge.