If you live in the West, you may have noticed in the post-COVID world a veritable deluge of creepy propaganda offering various explanations for surging heart attacks, strokes, and reproductive system damage.

The now-established medical fact is that the COVID-19 gene therapies deceptively marketed as “vaccines” wreak havoc on the cardiovascular system.

“We conclude that the mRNA vacs dramatically increase inflammation on the endothelium and T cell infiltration of cardiac muscle and may account for the observations of increased thrombosis, cardiomyopathy, and other vascular events following vaccination.”

The “experts/priests” who worship and respect the Science©, and interpret it like Nostradamus reading tea leaves, want to assure the peasants that the unprecedented increase in heart attacks, even in young people who historically don’t suffer from them has nothing to do with the “vaccines” produced by the same pharmaceutical entities that coincidentally fund their research work. 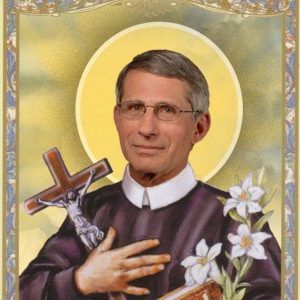 (Obviously, no conflict of interest affects the Science© overlords’ judgment because they exist in a moral class above the petty fallible humans they oversee).

Instead of experimental gene therapies that increase inflammation in blood vessels, the Science© ministers have divined alternative explanations (and don’t dare contradict their decrees, or your blasphemous Twitter account will get memory-holed): 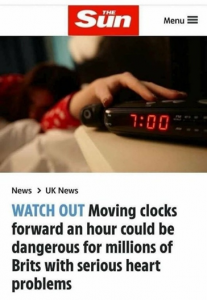 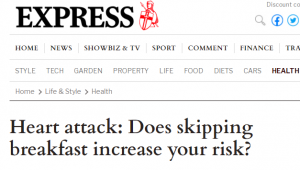 Daylight savings time is deadly for the whole family — kids have strokes too! 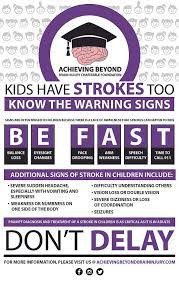 The principle at play here is akin to a legal concept called “plausible deniability.”

Most often, plausible deniability refers to members of high-ranking governments or similarly large, complex entities creating, through various machinations, a mirage of ignorance to protect themselves from liability for criminal or unethical behavior that they actually sanctioned.

Similarly, if the corporate media can offer an array of alternative explanations for the precipitous spike in heart attacks, cancers, etc., then determining for certain that an individual owes their debilitating health condition to the “vaccines” becomes virtually impossible – it could’ve been almost literally anything else!

Criminals under the burning heat of public scrutiny need plausible scapegoats – the higher the stakes, the more elaborate lengths they’ll go to manufacture them. And they don’t get much higher than double-digit surges in all-cause mortality.

Even before the vaxxes, the social engineers introduced a parallel strategy to muddy the waters on the origin of the SARS-CoV-2 virus and stem public pressure to identify the actual cause.

Eco-Health Alliance president Peter Daszak pressured a consortium of scientists under his direct and indirect influence to sign a letter in February 2020 ruling out the lab leak theory as a viable explanation for COVID-19’s origins:

“We stand together to strongly condemn conspiracy theories suggesting that COVID-19 does not have a natural origin… We support the call from the Director-General of WHO to promote scientific evidence and unity over misinformation.”

In ultra-thick irony, Daszak’s narrative collapsed when the truth emerged that he himself engaged in a conspiracy to produce his above-quoted misinformation campaign:

“EcoHealth Alliance President Peter Daszak, the head of an organization involved in research that genetically manipulates coronaviruses, discussed hiding his role in a statement published last year in The Lancet that condemned as ‘conspiracy theories’ concerns that the COVID-19 virus may have originated in a research lab.”

Likely with firsthand knowledge himself of where COVID-19 actually came from given his direct funding of the Wuhan lab (link), Daszak knew full well that the premises of his letter would later disintegrate into dust under scrutiny.

Daszak also likely suspected, even, that The Lancet would later be forced to reverse its position (and in the process flush its credibility as an authority down the toilet) when the glaringly obvious conflict of interests at play surfaced in the public eye.

(Among those many conflicts of interest were Eco-Health’s funding of the Wuhan lab, Daszak’s personal connections to the Chinese government, his close relationship with Anthony Fauci, etc.)

The point of the letter, then, like the “the four seasons cause heart attacks and definitely not vaxxes” propaganda, wasn’t the pipe dream of actually forever convincing the entire world that COVID jumped from a bat to humans.

Rather, the aim was to successfully obscure the public debate to the point that, once real evidence emerged, arriving conclusively at the true origins of the virus, and achieving consensus, would be so time-consuming, and the seekers would have to wade through such a thick swamp of corporate-sponsored misinformation, that they simply throw up their hands, exasperated.

The old “drowning in paperwork,” “needle in a haystack” dilemma.

And, then, enough of the population becomes agnostic on the origin story that the parties guilty of creating the virus escape punishment.

Just so, the media creates “plausible deniability” in terms of the “vaccines” triggering serious adverse effects by inundating their audience with volumes of competing explanations — “Yeah, it might be possible that the 11th booster gave your kid myocarditis, but it couldn’t been the nippy weather or Netflix. One can never know! Respect the Science©, peasant!”

Crafty lawyers, who predominately run the US government, employ this strategy constantly to defend their guilty clients.

Despite overwhelming physical evidence connecting their client to the murders, OJ Simpson’s lawyers, for example, attempted to bamboozle the jury with alternative explanations for Nicole Simpson’s and Ron Goldman’s killing — like attempting to draw parallels to other unsolved murders in the area, or offering more exotic and sensational theories like a drug deal gone wrong.

It worked, and OJ walked.

The obvious takeaway is that none of the “information” the corporate media presents is intended to inform, but rather to craft and then insert into the public psyche a deliberate narrative to absolve powerful actors of guilt.

Faced with hard evidence to contradict their preferred strategy of fully absolving their masters of wrongdoing, the corporate media will settle for obfuscation.