On Tuesday, President Biden signed the Emmett Till Antilynching Act into law. Much to the pro-lynching community’s dismay, this was a pivotal milestone for the Biden Administration’s mission to establish racial equity. His social media team took to Twitter for a well-deserved victory lap:

Given that the last documented lynching took place in 1981, this couldn’t have come soon enough!

There were, however, some closet-racists who “just couldn’t help” but demonstrate their support for lynching: 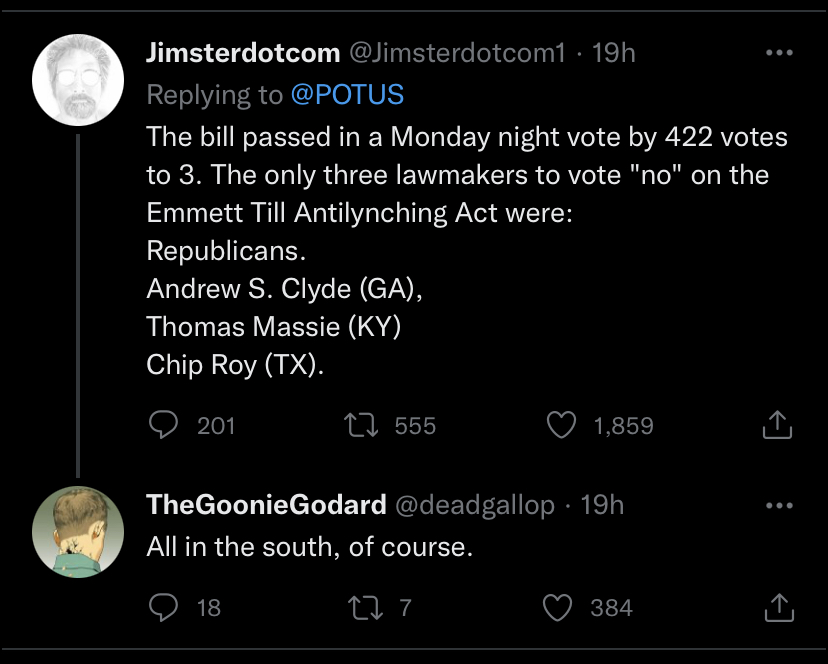 Joking aside, this seemingly innocuous case of virtue signaling is a dangerous expansion of executive authority. Here is the bill: 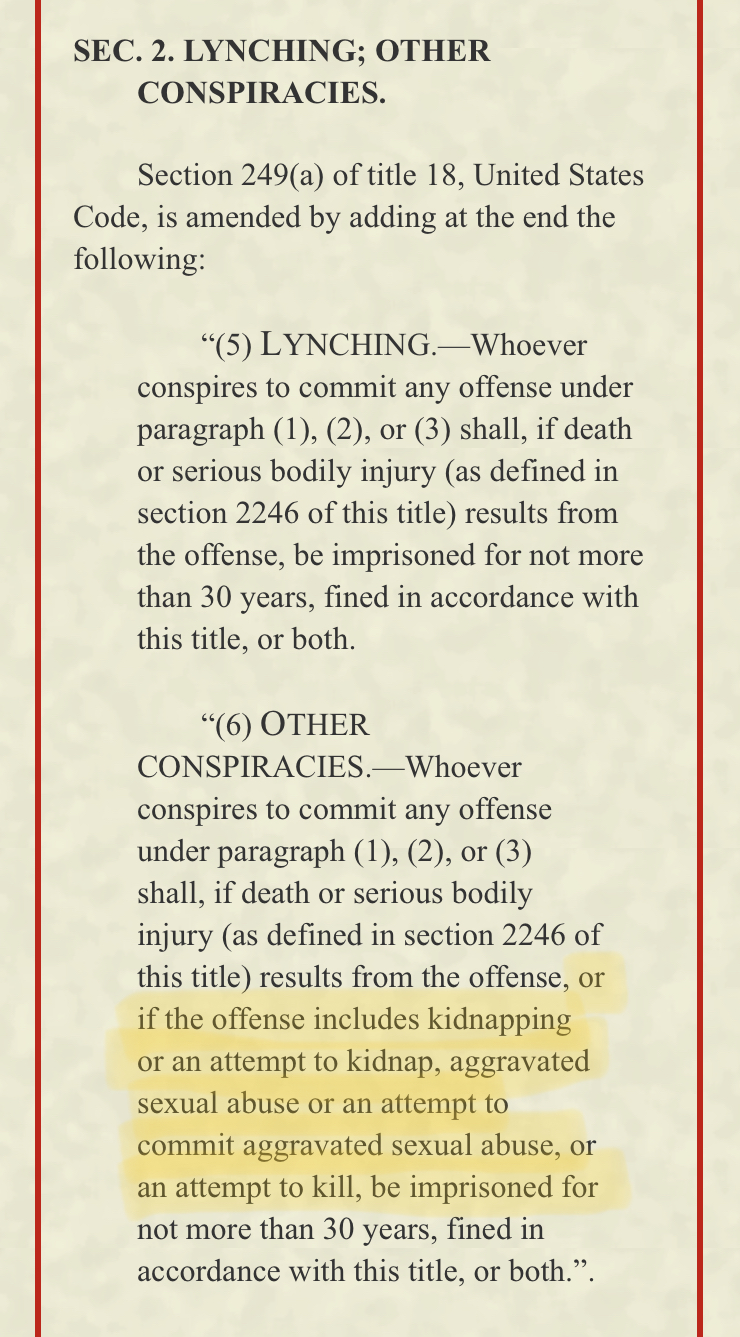 The bill amends the Hate Crimes Prevention Act, passed in 2009, which defines and criminalizes hate crimes. The minimum qualification is “an attempt to cause bodily injury” due to the victim’s race, sexual orientation, gender, or religion. Bodily injury can be defined as “physical pain” or “any other injury to the body, no matter how temporary.” Sensibly, the Act requires an attempt at violence be made - which is a crime itself regardless of prejudiced motives. The new Antilynching Bill takes this a step further by criminalizing “conspiracy” to commit a hate crime.

I’m sure someone will retort that “conspiracy to commit a federal crime is already a federal crime.” This is not a universally accepted interpretation of the law nor does the law’s language or historical precedent justify such a broad interpretation - hence the necessity for the new Antilynching Law. Criminalized conspiracies are those plotting “against the United States” - like the Volkswagen executives who attempted to defraud the EPA by faking emission results and, more recently, the leader of the Oath Keepers pleading guilty to seditious conspiracy for the January 6 riots.

So as of Tuesday, it is illegal to simply “agree” to participate in an act if it falls under the categories highlighted above. One can imagine dark political humor venturing into these categories - a comment such as “I hate so-and-so so much I could kill him” - being interpreted as “conspiring to lynch”. The key issue here is that intent should not be the sole subject of a court case. The purpose of courts is for a neutral arbiter to determine whether someone’s rights were violated during an encounter between two parties. Conspiracy, if no action is taken in pursuit of it, involves only one party: the conspirators. Therefore, it alone constitutes no crime as it couldn’t have possibly violated someone else’s rights.

With this new law, the US government has further expanded into the realm of policing thought crimes. Ominously, this law comes on the heels of the Department of Homeland Security’s attempt broaden the term “terrorist” and expand methods of identifying them. For those unaware, killings attributed to domestic extremists in 2020/21 were less than half what they were in each of the previous five years and white supremacists contributed a lesser portion to the domestic-extremist-murder-pie than in those previous years (they previously contributed over 50% of killings and currently do not). Overall there were only 29 killings in 2021 (less than 15 from white supremacists). Despite this, we continue to hear fear mongering from those in power:

It’s a mountain-out-of-a-mole-hill on par with the “Don’t Say Gay” hysteria. Though, this one may have far greater consequences down the road as texts, emails, social media posts, and speech are monitored and analyzed by our benevolent three-letter agencies so that they may establish the intent of our discourse. The Emmett Till Act may become a key piece in the arsenal for the US intelligence community’s war on free speech.