Just two months in, White House Press Secretary Karine Jean-Pierre is the most monumental failure at the podium in recorded history:

“It’s been a rocky first month for White House press secretary Karine Jean-Pierre. Her answers have baffled reporters, and even made some of her White House colleagues wince.” 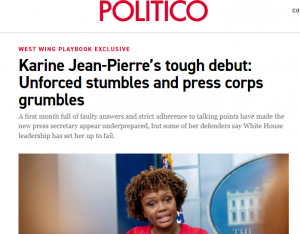 Imagine how bad her performance really has been to induce neoliberal Politico into writing such an unflattering intro paragraph.

That’s like a Hindu priest beating a sacred cow. Ordinarily, while covering a sacrosanct immigrant lesbian Person of Color© in such a position, Politico would fawn.

Just how historically awful has Jean-Pierre been? More importantly, what lesson does her failure teach on the hollowness of leftist identity politics?

“So, I just want to take the opportunity to celebrate and congratulate… Karine Jean-Pierre…
First, as you all know, she will be the first Black woman, the first out LGBTQ+ person to serve in this role, which is amazing, because representation matters.”
-Outgoing Press Secretary Jen Psaki, May 6, 2022

Since taking the podium, no individual has done more to singlehandedly undermine the affirmative action principle.

This specimen of mediocrity has been a spectacular failure. Without exception or exaggeration, each and every Jean-Pierre press conference has been an unmitigated trainwreck. I suffered through most of them, because I’m a  masochist.

Words alone can’t do justice. Some disasters have to be witnessed firsthand, up-close to appreciate, like a class V hurricane:

Consider her performance on June 2, 2022, in the throes of the baby formula shortage:

“Q: Did the President have any conversations with any Cabinet Secretaries or the FDA commissioner once he was confirmed in February about the formula shortage before April?

A: Look, you know, as — as more — as you all know, the President spoke to — to this yesterday: As more abnormalities were seen in supply and sales started to decrease in April — you know, because people have asked about this — senior White House staff made — made the President aware of the problem, and this was in April. I don’t have any calls to read out for you.”

Look how many hyphens the transcriptionist had to insert there. Stammering and stuttering, Jean-Pierre muddled through the pre-written talking points script in her notebook that someone competent prepared for her.

Even so, she failed to directly answer the question about whom the president talked to and when – or even come close.

The reporter politely followed up, not having received an answer, and she rambled further:

“I — so, as you know, the President deals with issues on a regular basis and that — that boils up to him.   And it’s just an — there’s no specific person that I can call out to you.  But it’s the regular way that we — we move forward through the regular channels.  I don’t have a specific person.  But that’s — that’s kind of how it goes.”

How it goes, indeed. That’s how unaccountability and the incompetent bureaucracy of a failed state goes.

The handpicked, compliant press corps attempted to get an answer to the same softball question – when and from whom Joe Biden first learned of the baby formula shortage – a minimum of eight more times.

Each time her answer was equally nonsensical. In response, she flipped through her notebook full of pre-canned answers, fingered one that might somehow tangentially connect to the question, read it (poorly), and moved on.

Literally, a well-trained sixth-grader could deliver a more inspiring product. Again, she wasn’t speaking extemporaneously off the cuff – she attempted to read basic sentences off of her notebook, and failed even at that.

The whole charade is a disgusting affront to the American people who pay Jean-Pierre’s and Biden’s salaries to role-play stewards of state.

Remember when the Biden administration and the corporate media promised, with the blackest humor, that “the adults are back in charge“?

When diversity takes precedence over competence, the “adults” aren’t in charge of anything. Unless, of course, by “adults,” one means the oligarchs who actually run the gears of state to rob the American public.

Those “adults” don’t care how dysfunctional the executive gets so long as the gravy train of favorable regulation and public subsidy for their private gain continues.

At least Jean-Pierre’s predecessor, Jen Psaki, could lie with a modicum of grace. Granted, Psaki was equally soulless and her moral compass equally broken. Yet she could at least string together a single-sentence lie without reading.

No one in their right mind believes Jean-Pierre would have gotten within a mile of that podium if she was a white man – unless maybe she was a trans white dude. Those are cool, and diverse.

Of course, the woke inmates who run the White House asylum pin the blame squarely on the nearest white man for Jean-Pierre’s failings:

“Some Black communications officials in and outside the administration, along with allies of Jean-Pierre, feel White House leadership has set her up to fail by having Kirby, a white man who was in the running for her job, hovering nearby and taking the lead on foreign policy.”

No way! Who could have predicted the blame-whitey routine?

By “hovering,” of course, they mean Kirby doing Jean-Pierre’s job for her on the high-stakes foreign policy front so as to avert nuclear holocaust. 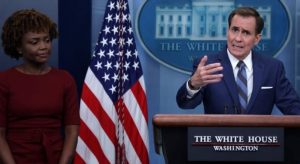 The Biden administration finds itself between a rock and a hard place. Every single newsday that Jean-Pierre is trotted out to the world to humiliate herself and her colleagues, the whole presidency’s credibility sinks even lower. Yet, the administration can’t get rid of her because that would be racist, homophobic, misogynist, etc.… all the isms. Then, it’d have a mutiny on its hands.

If you close your eyes, you can already divine the Buzzfeed headlines: KKK Biden Throws Diverse, Talented, Sacred Person of Color© Press Secretary Under the Bus After Two Months on the Job!

Biden’s handlers unleashed the SJW monster on themselves; they made their bed; now they have to lie in it. That’s called sweet, savory karma.