Letter: Blumenfeld tells well owners they now must pay for their own water

Legend has it that Jed Clampett “was shootin’ at some food / When up through the ground come a bubblin’ crude.”

The Beverly Hillbillies’ transformation into instant millionaires illustrates one of the oldest conceptions in the western world: What’s on your land belongs to you. This idea predates the founding of America. If you find gold in your backyard, that resource belongs to you.

California wants to change that.

A source near San Diego has shared with California Globe a shocking letter that’s quietly being delivered to owners of private wells.

“California is marching toward a world where those with wells on their own property will be required to put a meter on them and pay the government,” writes the source. “Because in their world, the government owns everything and we’re just renters.”

The letter is signed by Natalie Stork, the Chief of Groundwater Management Program Unit 1, and was sent in late July on the letterhead of California Water Boards, under the authority of Gov. Newsom and Jared Blumenfeld, Secretary for Environmental Protection. Buried beneath the bureaucratic acronyms GSA and SGMA (Groundwater Sustainability Agency and Sustainable Groundwater Management Act) is an extremely aggressive conception of government authority and its dominion over private property.

This is not merely a bureaucratic hassle. There are fees, of course. The base filing fee is $300 per well, which all extractors are required to report. Then there’s an additional fee of $10 per acre foot with a meter, $25 per acre foot without. Tardy filers face a late fee of 25% per month.

California Globe reached out to Ms. Stork and SGMA to inquire how widely this letter was sent and where the State Water Resources Control Board derives the right to charge well owners for water on their own property. This story will be updated to include her comment if either responds.

Meanwhile, the ramifications for property rights are enormous.

“They’re sending out letters to property owners saying they must declare [if] they use just two acre feet,” observes the source who received the letter. “If they use more they must pay an annual fee of $300 for each well plus they must meter the water and send in a monthly usage report and pay a fee for water that is pumped starting in Feb 2023. What a great racket! The government provides no service, no support, no product, doesn’t even do the billing! That’s all on citizens. All [the government does] is cash the check.”

According to two people who received the letter, so far no organized resistance to this private property grab has yet emerged. But at least one source expects the small fees to grow, which will surely lead to pushback from residents.

“The fees may seem small today, but they always start small. Then they’ll ratchet up. Similarly, while this excludes light domestic users, it won’t for long.”

Below is a copy of the letter, with potentially identifying portions redacted to avoid the recipient being targeted by government authorities who clearly know no bounds. 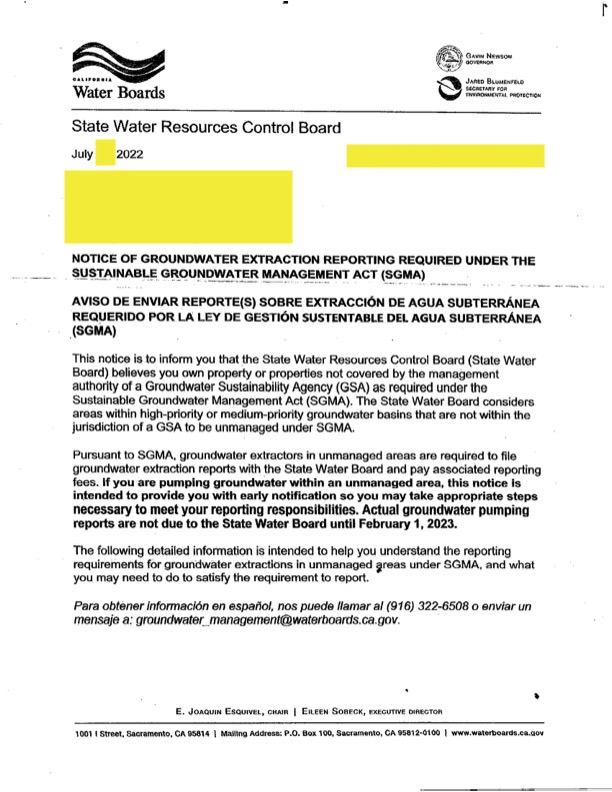 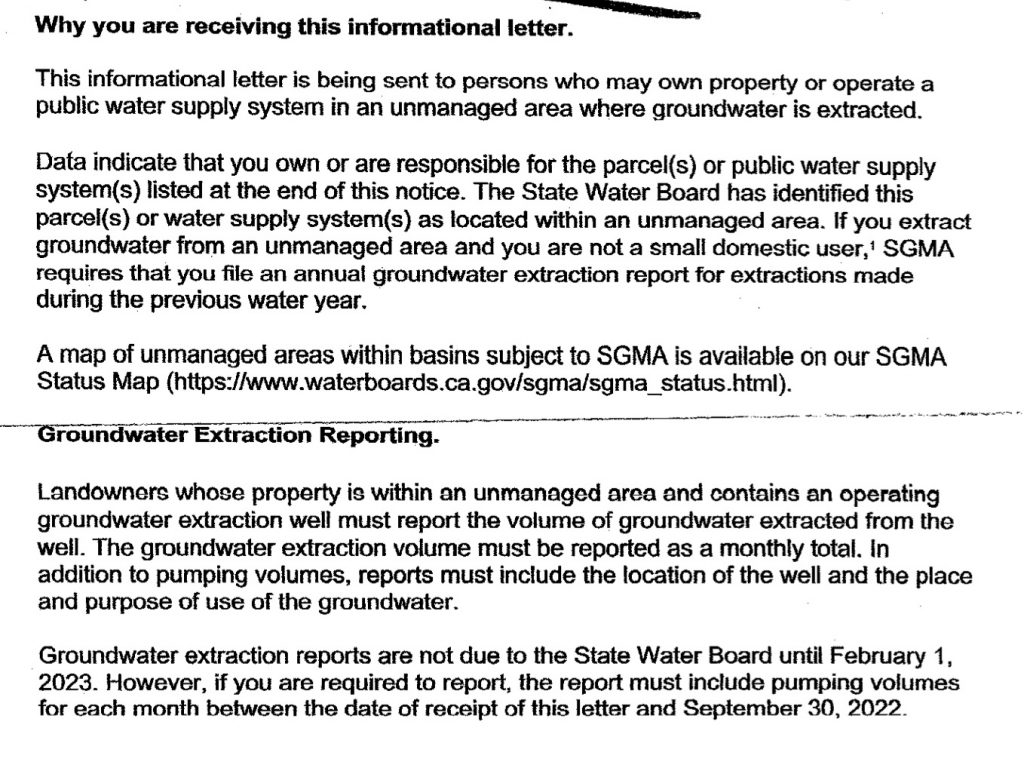 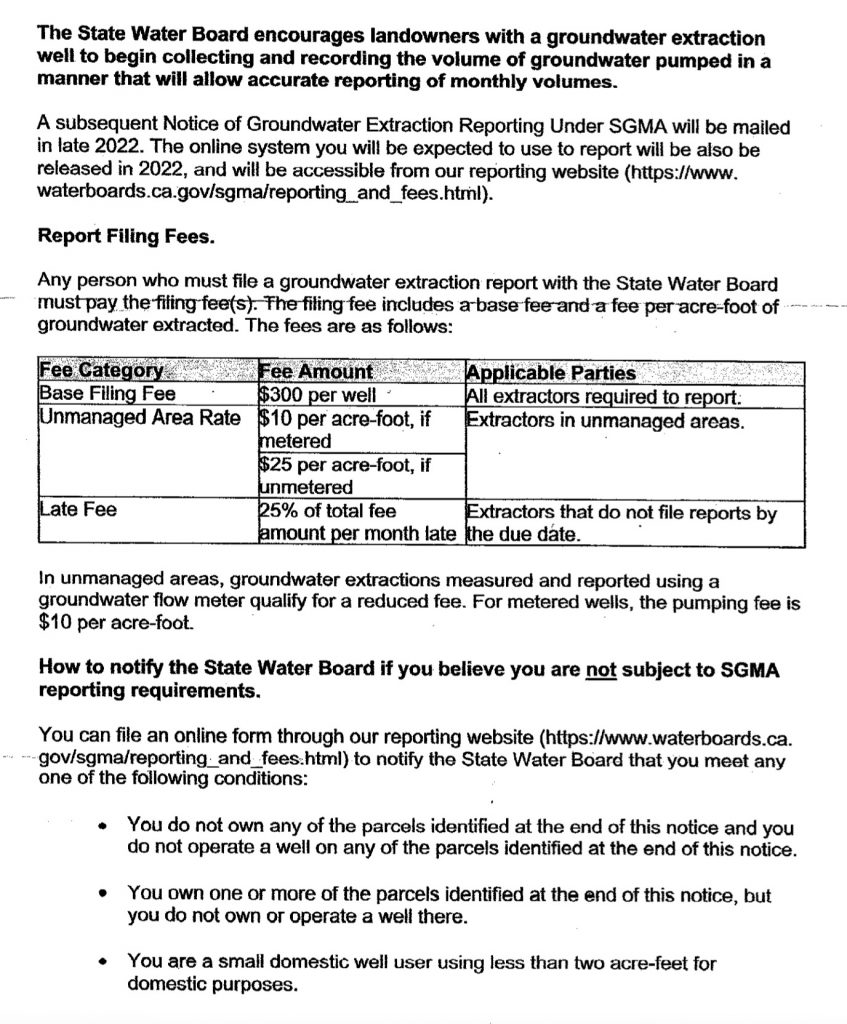 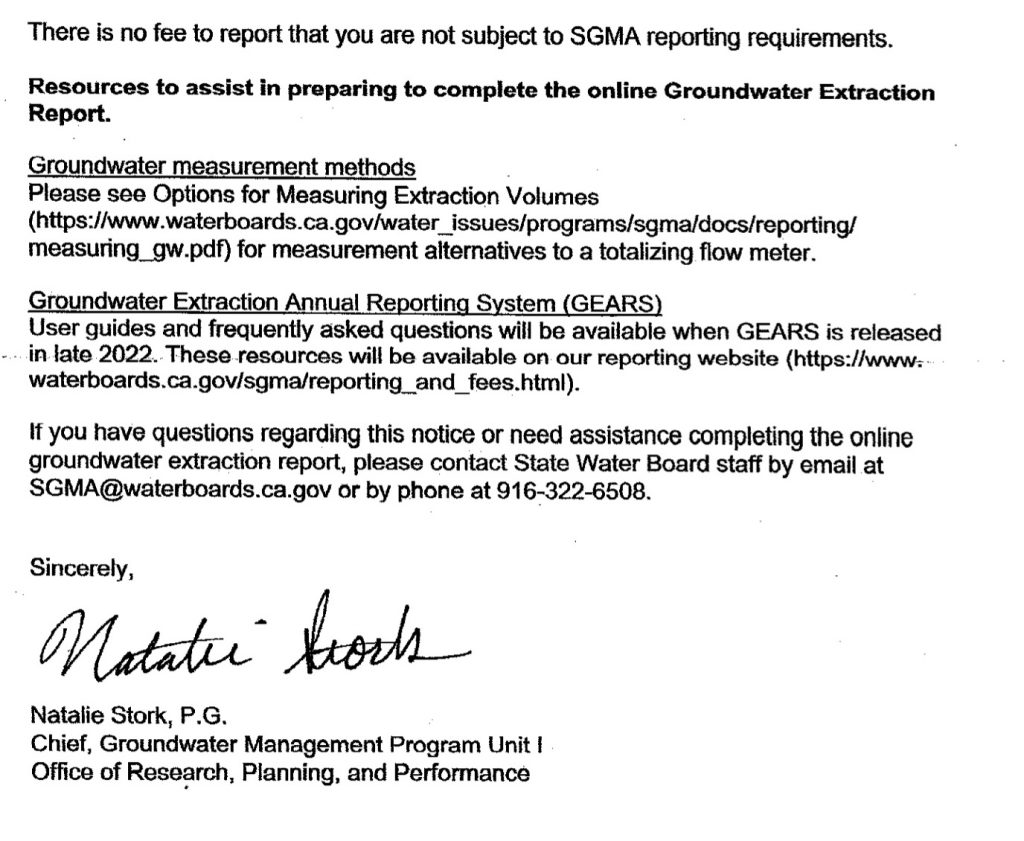