In July, Reddit arbitrarily deemed the term “groomer” transphobic “hate speech” or whatever, and decreed that users get banned on sight for using it now.

In reality, “groomer” is too mild/euphemistic to describe these ideological fanatics. “Super predator” might be more suitable to convey the extreme nature of the child endangerment threat they pose.

“They are often the kinds of [LGBTQ+++© deviants] that are called ‘super predators.’ No conscience, no empathy. We can talk about why they ended up that way, but first we have to bring them to heel.”
-Hillary Clinton on ]trans groomers]

In a single generation – millennial to Gen Z – the respective percentage of the population self-identifying as “LGBTQ+++©” has doubled.

“21% of Generation-Z Americans – those born between 1997 and 2003 – who have reached adulthood identify as LGBTQ, more than double the proportion of millennial adults who do so.” 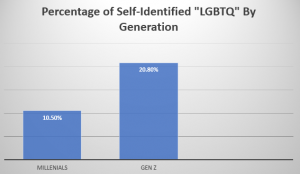 Of course, leftist groomers will do mental gymnastics to obfuscate the issue. They’ll claim that this unprecedented spike in self-identified “LGBTQ+++©” youth is all the organic result of liberating “queer” children from social stigma.

Heterosexuality is necessary for the reproduction of a species. As such, all mammals have a fundamental evolutionary incentive to copulate with members of the opposite sex. The reproductive organs of male and females are designed for interface.

Ergo, heterosexuality is the norm for mammals. Deviation from the norm is, by definition, abnormal. Other primates, homo sapiens’ closest relatives in the animal kingdom, do not practice “queer” lifestyles:

“Humans are unique among primates for not only engaging in same-sex sexual acts, but also forming homosexual pair bonds.”

Even if/when homosexuality occurs as an aberration – a deviation from the norm — no reasonable person not blinded by ideology would expect a doubling of such abnormal sexual behavior to occur in a single generation organically in nature.

The reason that more and more children abruptly decide they are “queer” is that children, by their nature, are vulnerable, programmable and malleable.

Their impressionable self-perception, and the fact that children are the future, are the reasons that groomers of any ideology always target them first. They can be conditioned to believe literally anything – including that they’re some other gender.

We often see the fruits of parental child grooming when a child regurgitates social justice jargon, but rarely do we capture the feeding of verbatim talking points on camera.

After her child rehearses his lines, the abusive mother performatively cries for the camera at 00:45, lamenting that “there’s so many kids that don’t have the opportunity to express who they really are.”

By “who they really are,” of course, she means “the object I turned him into for the sake of satisfying my ideological impulses unmoored by reality.”

The brazenness! The hypocrisy!

Here’s another mother with blue hair explaining how she “encourages” her son’s transgenderism, in which he oscillates daily between girlhood and boyhood.

The universality of LGBTQ+++© indoctrination in public schools shocks the conscience.

All Libs of Tik Tok does, for the most part, is repost unedited, deranged TikTok clips of deranged groomer teachers bragging about their indoctrination methods and broadcasting their successes.

Reposting unaltered, publicly posted clips is the kind of “targeted harassment” that drives the left and their Silicon Valley social media Daddies bananas.

Here, a wide-eyed transgender groomer teacher explains that – probably following months of propaganda — one of her students “felt safe enough” to divulge his pronouns. Then the entire class, presumably dozens of students, followed suit. They all simultaneously switched pronouns as well.

What a statistical anomaly! What are the odds!? An entire class changed their pronouns at exactly the same moment in time, all on their own!

Occam’s razor is a handy epistemological rule of thumb that states that the simplest solution, the one that relies on the fewest assumptions possible, is likeliest to be true.

In this case, Occam’s razor is monkey see, monkey do. Children reflexively ape what authority figures and other, popular children do.

They wouldn’t even know what a “pronoun” was until 4th-grade grammar class, any more than they would be familiar with gerunds or participles.

If you’re a parent who sends your kids to public school, these lunatic predators enjoy unfettered, unsupervised access to your children all day long. You’re feeding them to the wolves. If you understand this and continue to shunt them into these indoctrination centers out of convenience, you are complicit in their psychological destruction.

Of course, homeschooling is hard work, and not everyone can afford private school tuition. Nonetheless, letting them run feral unsupervised in the woods behind your house would be less detrimental to their psychological development than delivering them to the wolf’s lair.

When your little girl gets talked into chopping her breasts off or your little boy gets put on hormone blockers with lifelong adverse health consequences… if you’ve come this far, consider yourself duly warned.

Yes, public school groomers are the guiltiest of all, and they bear primary responsibility. In a sane society, they would be dealt with. As the parent, though, you bear ultimate responsibility for your child’s welfare.

That is the law of nature. You can’t outsource parenting to the state, especially not the rainbow groomer kind hellbent on chemically and spiritually castrating your progeny.