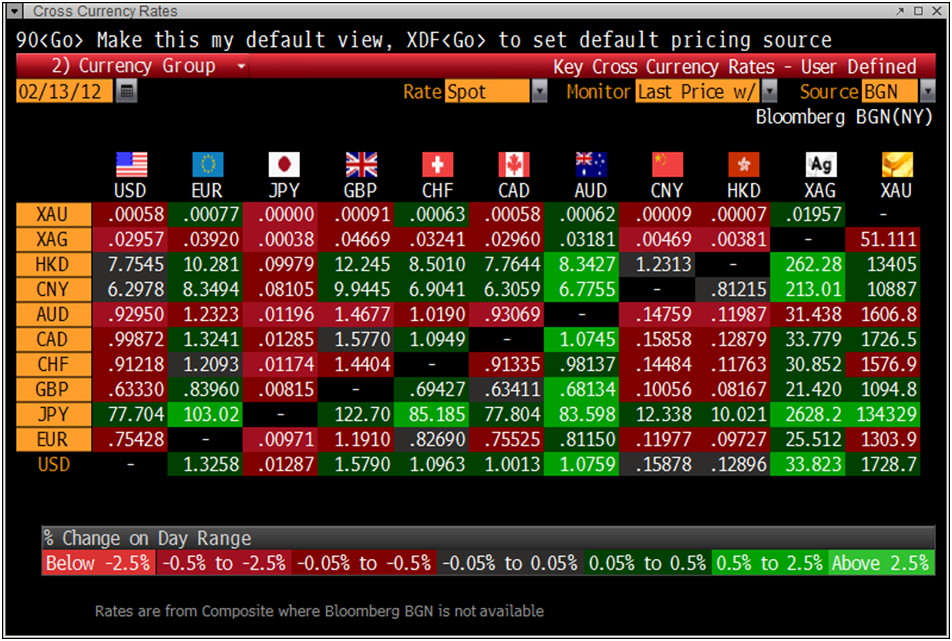 Traders in Hong Kong say that the Chinese continue to buy gold on any weakness.  Bullion buying from China and the rest of Asia (more below) may have led to the spike higher at the open in Asia.

Risk aversion has increased and stock markets have risen after Greece’s parliament finally approved the austerity bill to secure a second set of loans from the IMF and EU. The move is likely to provide a temporary respite and stave off default and bankruptcy for a while longer.

The debt deal and austerity measures were met with serious violence in the streets of Athens and elsewhere in the country, as it is deeply unpopular with the public and with much of the body politic.

The EU plans to meet Wednesday to give the final seal of approval on the 130 billion euro bailout.

Gold fell by nearly 0.4% last week – its second marginal weekly fall. This is negative technically but healthy for the gold market as gold appears to be consolidating after the sharp 20% gains seen in January.

"The Chinese guys are still buying.  Whenever there is a dip in prices, they will buy. There's no change in their attitude," said a physical dealer in Hong Kong, who trades gold bars. "They are still buying today, because I think the downside is limited for the time being. Sentiment has improved a little bit.’’

Market focus tends to be almost solely on Chinese and Indian demand but demand is broad based throughout increasingly important Asian gold markets. Demand for gold remains robust in most Asian countries where consumers are buying gold as a store of wealth due to concerns about their local paper currency.

This phenomenon is happening throughout Asia including in Malaysia, Indonesia, Thailand and Vietnam and other large Asian countries (see news below regarding demand for gold by investors in Thailand).

AFP have a very interesting article on Vietnamese ‘gold fever’ which recounts how  “stashing gold at home rather than having cash in the bank is a generations-old habit in communist Vietnam”.

And old habits are dying hard even if an ounce of gold bullion can now cost up to US $100 more in Hanoi than anywhere else in the world due to government meddling in the gold market.

AFP quote 60-year-old retiree Truong Van Hue “I still like to keep my savings in gold. It's safe for retired people like me. I can sell the gold any time, anywhere, when I need cash,” he told AFP.

Although the treasure has long been perceived as a safe haven, the recent gold rush has alarmed Vietnam's government, which is faced with an 18 percent inflation rate and an unstable national currency, the dong.

Vietnam's love of the yellow metal is centuries-old, rooted in a history of strife, warfare and want. "Empires may fall, currencies may change... gold will always survive," said sociologist Vu Duc Vuong.

Speculative long positions, or bets prices will rise, outnumbered short positions by 177,507 contracts on the Comex division of the New York Mercantile Exchange, the Washington-based commission said in its Commitments of Traders report. Net-long positions rose by 6,148 contracts, or 4 percent, from a week earlier.

Miners, producers, jewelers and other commercial users were net-short 221,072 contracts, an increase of 11,210 contracts, or 5 percent, from the previous week. 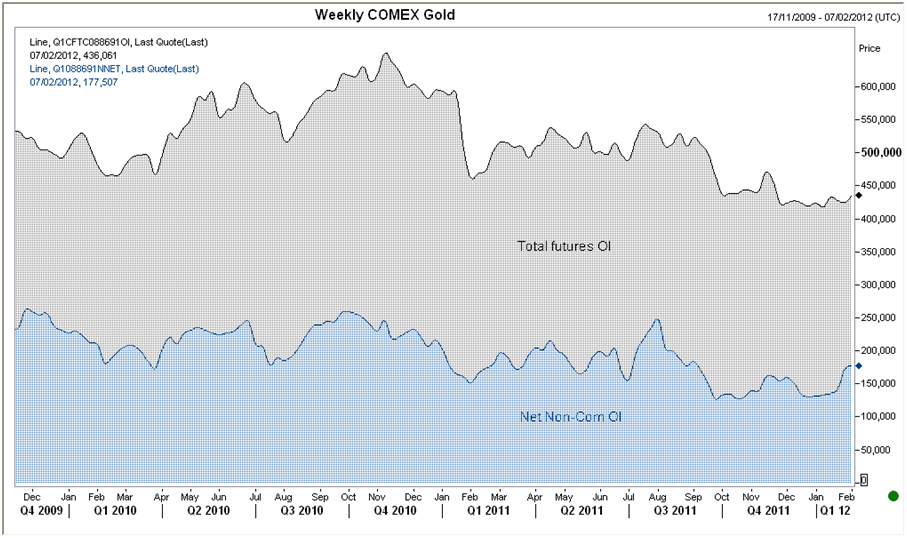 Speculative long positions, or bets prices will rise, outnumbered short positions by 23,587 contracts on the Comex division of the New York Mercantile Exchange, the Washington-based commission said in its Commitments of Traders report. Net-long positions rose by 4,496 contracts, or 24 percent, from a week earlier.

Silver futures fell this week, dropping 0.4 percent to $33.60 a troy ounce at today's close. Miners, producers, jewelers and other commercial users were net-short 34,650 contracts, an increase of 5,921 contracts, or 21 percent, from the previous week.

(Bloomberg) -- Speculators Lift Wagers to Highest Since September: Commodities
Hedge funds increased bets on rising commodity prices to the highest since September on mounting confidence that growth in the U.S. will strengthen demand.

Money managers boosted their combined net-long positions across 18 U.S. futures and options by 13 percent to 929,199 contracts in the week ended Feb. 7, Commodity Futures Trading Commission data show. That’s the highest since Sept. 20. Bullish wagers on copper rose to a six-month high, and soybean holdings jumped by the most this year.

The Standard & Poor’s GSCI Spot Index of 24 commodities rose to a six-month high on Feb. 9, a day after the MSCI All- Country World Index entered a bull market, as indicators signaled accelerating growth. Fewer Americans than forecast filed claims for jobless benefits in the week to Feb. 4, and consumer confidence rose to a one-year high. Investments in commodities expanded for a seventh week, the longest streak since February 2009, data compiled by Bloomberg show.

“The improving economic data, not just in the U.S., we’ve seen better data in Europe as well, has put recession fears on the back burner,” said Anthony Valeri, a market strategist with LPL Financial in San Diego, which oversees $330 billion of assets. “That augers well for commodity demand.”

Silver Rally
The S&P GSCI gauge rose 1 percent last week. The number of futures contracts on 24 commodities from oil to copper rose 0.8 percent, extending this year’s expansion to 13 percent. The MSCI index of equities ended the week down 0.4 percent, and the yield on 10-year Treasuries rose 6.4 basis points, or 0.064 percentage point, according to Bloomberg Bond Trader prices.

Seventeen of the raw materials tracked by the S&P GSCI gained this year, led by a 20 percent advance in silver. Zinc jumped 13 percent and copper climbed 12 percent.

“Global liquidity, negative real interest rates and persistent fears over fiat currencies as a whole will boost investment at all levels,” the bank said. “Even when the sovereign debt issues have been resolved in Europe, inflation will by then be an important issue.”

(SET News) -- Thai bourse sees Gold ETFs as opportunity for investment
The Stock Exchange of Thailand (SET) confirms that trading prices of all four gold exchange-traded funds (ETFs) listed on SET are efficiently in line with gold prices in the global market and their net asset values, and the exchange also assures investors of its surveillance system. "The gold ETFs have proven very attractive for domestic investors since they listed on SET late last year, with a combined trading valuation of THB 6.52 billion (approx. USD 210 million) in 2011, because the instrument is an innovative financial tool well-designed to meet investor demand for gold trading. The SET-listed ETFs enable investors to buy or sell at any time during exchange trading hours and provide real-time indicative net asset values (iNAVs), unlike general gold funds. There is also no currency risk as the ETFs are traded in the Thai baht currency," said Pakorn Peetathawatchai, SET's Chief Marketing Officer.

Prices of gold ETFs listed on SET have tracked those of gold prices in the global market and trading prices are usually in line with gold fund's NAVs because leading gold brokers have participated as market makers. Consequently, investors have the opportunity to get returns similar to those from trading in physical gold without worries over the storage of gold, and can be assured by SET's settlement and market surveillance systems.

(The Telegraph)
Iran presses ahead with dollar attack

(Business Insider)
Mauldin: The Truth Is It Doesn't Matter Who's President -- We'd Be Screwed Regardless