Gold was off $1.70 or 0.11% in New York yesterday and closed at $1,559.50/oz. Gold fell in Asia prior to gains late in the session and these gains continued in early European trading as lower prices are leading to some safe haven demand.

Gold looks set to see a fourth consecutive monthly loss which will be bearish technically. Gold will need to rally nearly $100/oz between now and end of trading of next Thursday May 31st to not incur a monthly loss of some 6% in May.

It will be the first time it has had four consecutive monthly losses since the four months to January 2000 – prior to the current secular bull market.

Gold’s monthly decline is primarily in dollar terms and therefore a dollar phenomenon as it coincides with a very poor month for the euro which currently is down nearly 5% versus the dollar.

Thus, gold is only down 1% against the euro while most European equity indices are down by 5% plus.

Although gold is a safe haven, in recent days speculators and investors burnt by riskier assets like equities, oil and industrial metals have been forced to liquidate their gold paper positions to cover losses in other markets.

While speculative players in futures markets can exert considerable influence in the short term, as ever physical supply and demand will be the ultimate arbiter of price in the long term.

The debt crisis in Europe looks like it may spiral out of control and trigger a global economic slowdown and contagion which will again support gold in the long term.

Holdings in the SPDR Gold Trust, the biggest bullion-backed exchange-traded fund, rose for a second day to 1,270.30 metric tons yesterday. Demand in Asia outside of India was “good” yesterday and interest in Europe is “evident,” UBS said in a report this morning.

Premiums of gold bars in Tokyo rose to as much as $1.50 per ounce above London prices, the highest level since last March, as investors turned from sellers to buyers during this most recent price correction, dealers told Reuters.

The IMF central bank gold demand figures for April were very bullish and suggest that central bank demand in 2012 may be even higher than the 456.4 tons added last year – which was the most in almost five decades.

The World Gold Council estimates that central banks will buy as much as 400 tons this year.

The data yesterday suggests that demand may be even higher than these levels and there is also the near certainty that larger central banks, such as the People’s Bank of China, are quietly accumulating gold reserves and not reporting their purchases to the IMF - as was done previously.

Today, the deputy chairman of Russia's central bank, Sergey Shvetsov, said that the Bank of Russia plans to keep buying gold on the domestic market in order to diversify their foreign exchange reserves.

"Last year we bought about 100 tonnes. This year it will be less but still a considerable figure," Shvetsov told Reuters on the sidelines of a financial conference in Milan.

Yesterday, Shvetsov said that Greece has plans for a parallel currency and that it is a “necessity” for Greece to leave the euro.

US exchanges are closed on Monday for Memorial Day.

The amount that speculators must keep on deposit for an initial account in gold futures was reduced to $9,113 from $10,125, CME Group said today in a statement on its website. 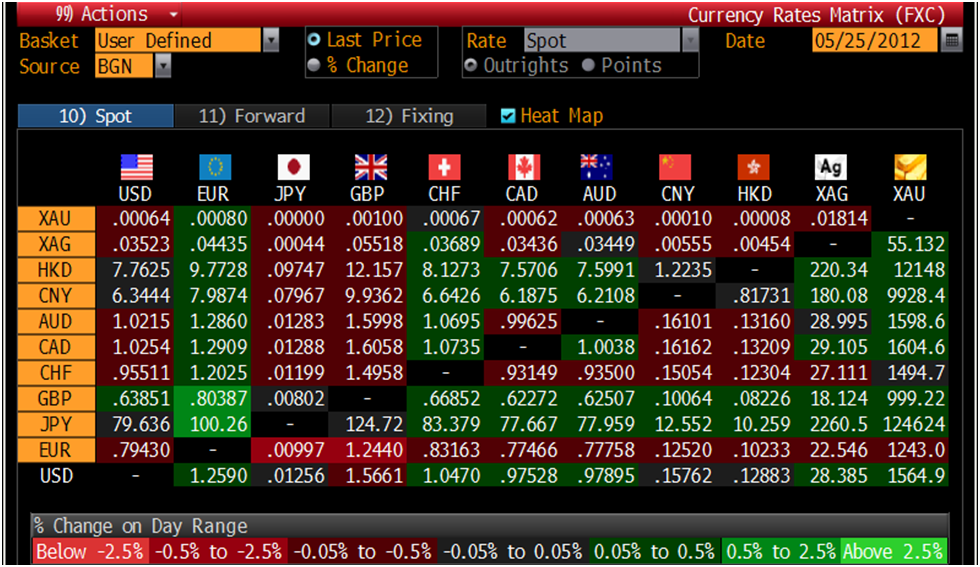 NEWS
Gold weakens on euro, on track for 6 pct loss in May - Reuters

COMMENTARY
Gold is near a critical turning point – where will it go next? - MoneyWeek

James Rickards: Currency Wars – The Making Of The Next Global Crisis - GoldSeek