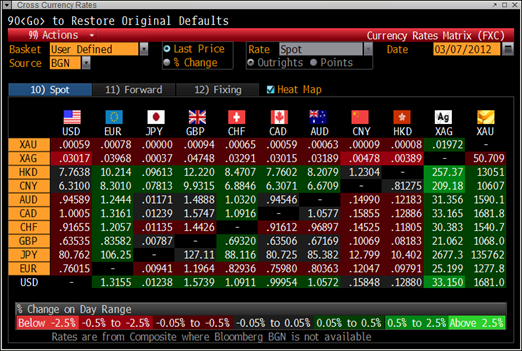 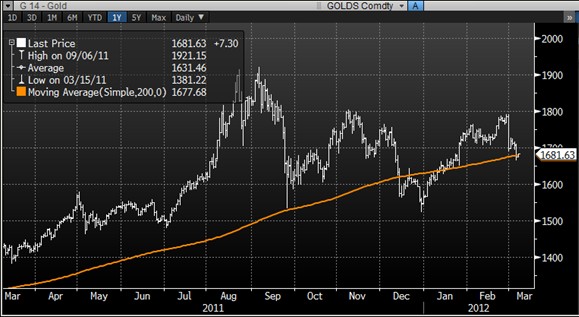 Volume yesterday in most active April futures topped 237,000 lots, making Tuesday the third highest day in terms of turnover in a month. This compares with Feb. 29's 343,493 lots of volume, the largest for one day of trade since Sept. 23 2011.

Asian shares fell for the third day in a row on Wednesday as investors grew more risk-averse, with renewed uncertainty over Greece's bailout and mounting worries about slowing global economies overshadowing support provided by ample liquidity. European shares have eked out gains in early trading.

German lawmakers are to review Bundesbank controls of and management of Germany’s gold reserves.  Parliament’s Budget Committee will assess how the central bank manages its inventory of Germany’s gold bullion bars that are believed to be stored in Frankfurt, Paris, London and the Federal Reserve Bank of New York, according to German newspaper Bild. 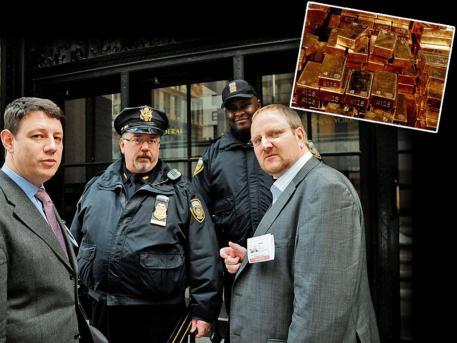 The German Federal Audit Office has criticised the Bundesbank’s lax auditing and inventory controls regarding Germany’s sizeable gold reserves – 3,396.3 tonnes of gold or some 73.7% of Germany’s national foreign exchange reserves.

There is increasing nervousness amongst the German public, German politicians and indeed the Bundesbank itself regarding the gigantic risk on the balance sheet of Germany's central bank and this is leading some in Germany to voice concerns about the location and exact amount of Germany’s gold reserves.

The eurozone's central bank system is massively imbalanced after the ECB’s balance sheet surged to a record 3.02 trillion euros ($3.96 trillion) last week, 31% bigger than the German economy, after a second tranche of three-year loans.

The concern is that were the eurozone to collapse, Bundesbank's losses could be half a trillion euros - more than one-and-a-half times the size of the Germany's annual budget.

In that scenario, Germany’s national patrimony of gold bullion reserves would be needed to support the currency – whether that be a new euro or a return to the Deutsche mark.

The German lawmakers are following in the footsteps of US Presidential candidate Ron Paul who has long called for an audit of the US’ gold reserves.

It is believed that some 60% of Germany’s gold is stored outside of Germany and much of it in the Federal Reserve Bank of New York.

Germany and other central banks may follow in Hugo Chavez’s footsteps and repatriate their gold to Germany so as to have direct possession of and ownership of their gold reserves in order to be better prepared for a systemic or monetary crisis.

Jim Rickards has outlined possible plans by the Federal Reserve to commandeer Germany’s and all foreign depositors of sovereign gold at the New York Federal Reserve in the event of a dollar and monetary crisis leading to intensified “currency wars” and the ‘nuclear option’ of a drastic upward revision of the price of gold and a return to a quasi gold standard is contemplated by embattled central banks to prevent debt deflation.

Gold Fields Ltd., the world’s fourth-largest producer of the metal, had production stopped at its South African operations by a one-day strike by the Congress of South African Trade Unions over road toll fees and labor- broking.

“Attendance at our mines for the morning shift is around 15 percent,” Gold Fields said in an e-mailed response to a query today. “Effectively our staffing is therefore limited to essential services.”

About 15 percent of workers arrived for the morning shift at mines run by Gold Fields, the world’s fourth-largest producer of the metal, the Johannesburg-based company said in an e-mailed statement today. Volkswagen, GM, Ford Motor Co. and Daimler AG shut their local plants, according to the companies.

The Congress of South Africa Trade Unions, an ally of the ruling African National Congress, is pushing President Jacob Zuma to ban labor brokers that arrange short-term contracts and curb costs as inflation erodes wage gains. The nationwide strike may shut down 30 percent to 40 percent of Africa’s biggest economy, according to Mike Schussler, chief economist at Economists.co.za, a Johannesburg-based advisory service.

Workers began gathering in various cities around the country to start 32 planned protest marches, Cosatu, the nation’s largest labor federation representing about 2 million workers, said in an e-mail. Protesters are due to march to the Chamber of Mines in Johannesburg and to Parliament in Cape Town. The nation’s biggest mining, manufacturing and transportation unions have backed the one-day protest.

The Economist
Kaplan & Burbank: Gold Is Money And Is Not A Bubble - Buttonwood Video Interview

Zero Hedge
Some Observations On Recent Gold (And Silver) Volatility

The American Dream
USA #1? 40 Embarrassing Things That America Is The Best In The World At