Gold edged down $2.90 or 0.19% in New York yesterday and closed at $1,539.40/oz. Gold climbed during volatile trading in Asia having recovered from the NY close yesterday. In European trading the yellow metal is hovering near the $1,548/oz level. 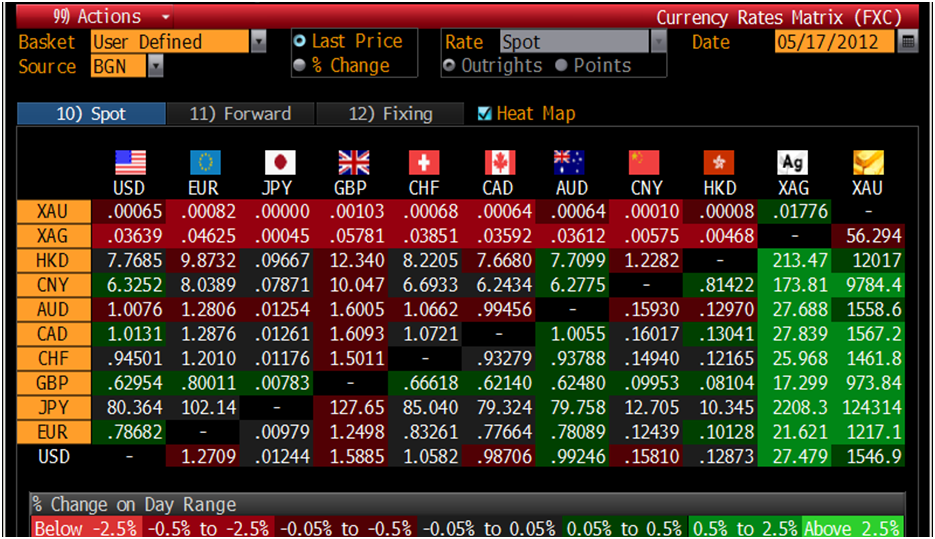 Gold fought back yesterday after touching its lowest level since Dec 29th, as concerns about Greece’s political instability and possible departure from the euro, prompted investors to buy back into bullion.

Technically, gold’s trend remains down but gold looks increasingly oversold. Bullion’s 14-day RSI (relative-strength index) was at 25.14, and once it’s below thirty it may indicate a rebound.

The euro rose from a 4 month low against the dollar as Fed policy makers are again suggesting that further QE is needed which will again be bullish for precious metals.

While global demand was down 5% from the record high of Q4 2011, it was significantly higher than demand in Q1 2011 suggesting that global demand may be consolidating at these higher levels.

Investment demand again dominated as under owned gold continues to be diversified into and accumulated globally.

The key drivers of this increase came from China and global ETFs.

In this the Chinese Year of the Dragon – China is becoming a fundamental driver of the gold market.

Global demand was boosted by China posting a quarterly record of 98.6 tonnes of investment demand up 13% from Q1 2011. This increase was a result of investors’ continued move to preserve wealth amid ongoing concerns over inflation, volatility in equity markets and price falls in some property markets.

Jewellery demand in China, much of which is also store of wealth demand, increased to 156.6 tonnes – 30% of the global appetite.

This increase places China as the largest jewellery market for the third consecutive quarter.

Retail and institutional investors buying exchange traded funds (ETFs) accounted for 51.4 tonnes of gold purchased in the three months to the end of March, at a total value of $2.4bn. The World Gold Council stated that this movement was in stark contrast to the first quarter of 2011, when the ETF sector witnessed net outflows.

ETFs and similar products were the beneficiary of solid inflows during the first quarter. The bulk of demand was generated in January and February, with demand tailing off to some extent during March as the gold price stabilised and investors awaited fresh economic data.

While the year-on-year data suggests that it was a challenging quarter for investment demand in Europe, Q1 2011 was an exceptional period for demand, fuelled by European sovereign debt concerns and the Arab Spring. European investment demand remains well above pre-2008 average quarterly levels and indicates sustained investor interest at relatively high levels.

Central Bank Demand
Central banks across the developed and emerging markets purchased 80.8 tonnes of gold in the first three months of the year, at an average price of $1,691/oz.

Central banks diversified into gold despite prices being 22pc more expensive than a year ago. With risks posed to the euro, the dollar and all fiat currencies due to very poor public finances this central bank demand is set to continue.

Luxury/Jewellery
India and China, the two largest jewellery demand markets, provided the main stories of the quarter from a jewellery perspective.

The first quarter of 2012 was an unprecedented period for India, with a number of market forces converging to dampen demand. Weakness in the rupee resulted in elevated local prices while consumers digested a rise in import taxes on gold and the introduction of an excise duty on gold jewellery, which prompted jewellers’ country-wide to strike. However, in May, the government withdrew the new tax on jewellery and the market is already responding positively.

There was strong consumer demand for wireless products such as mobile phones and media tablets. Similarly, a rise in end-use by the auto sector has also benefited demand, even though production volumes in Europe remained under severe pressure. Further growth within the NAND flash memory market also helped offset losses elsewhere, thanks to major sales drivers such as ultrabooks equipped with solid-state-drives and smart phones.

Conclusion
While demand remains robust globally and particularly from institutional investors, Asian store of wealth buyers and central banks, gold remains very under owned vis-à-vis other assets such as equities, bonds and cash.

The entire global gold demand in the first 3 months of 2012 was just $59.7 billion and all the investment demand for gold in the world was just $21.2 billion in the same period.

By putting this number in perspective we can see how small the gold market remains and how there is the possibility of much more demand which could push prices higher in the coming months and years.

The US trade deficit for just one month has been close to or over $50 billion dollars for a number of years now.

Tomorrow, Facebook will float an event that is expected to value the business at around $100 billion and there are hundreds of examples of valuations in the tech sector which seem optimistic at best given the macroeconomic, systemic and monetary challenges facing the world.

An example of this potential systemic risk is the $3 billion loss by JP Morgan. One investment bank lost $3 billion on a few trades. This equates to a value of one tenth of the dollar value of all the gold in the world that was bought for investment purposes in Q1 2012.

This suggests that the bubble may again be in debt, in finance, in the leveraged banking sector and in the tech sector and when the bubbles in these sectors burst, some of that capital will flow into the very small physical gold market.

This could lead to dramatically higher prices and means that our long held price target of $2,400/oz (the inflation adjusted high from 1980) is becoming increasingly conservative.

However, as ever physical gold bullion should be bought for wealth preservation reasons rather than the blind pursuit of capital gains.

“Now, we don’t have internationally recognized refineries nearby,” Far East Managing Director Albert Cheng told reporters at a briefing today. A Singapore-based one would help facilitate supply, he said.

The country plans to boost its share of the global gold trade to as much as 15 percent over the next decade, from 2 percent, according to a government trade agency. Investment- grade gold, silver and platinum will be exempt from a 7 percent goods and services tax from Oct. 1, Finance Minister Tharman Shanmugaratnam said his budget speech in February.

(Bloomberg) -- UBS Says Gold Needs to Drop Below $1,500 to Draw Investor Buying
Gold needs to fall below $1,500 an ounce to attract investor buying, according UBS AG said in a report today.

(Bloomberg) -- Gold May Beat Silver Rallying to $1,600: Technical Analysis
Gold may outperform silver and rally to $1,600 an ounce in the near term, Barclays Plc said, citing historical multiyear trading patterns.

An ounce of gold bought 56.0387 ounces of silver today. The so-called ratio reached 57.1101 yesterday, the most since December, according to data compiled by Bloomberg. The ratio has risen 28 percent in the past year, as concerns about slowing global economic growth prompted investors to reduce bullish bets on silver used in everything from solar panels to batteries.

A “multiyear trend break signals further relative outperformance for gold,” Barclays analysts including Philip Roberts wrote in a report yesterday. “We look for buying interest near $1,520 to underpin a near-term uptick toward the $1,600 area,” they said, referring to gold prices.

The metal erased this year’s gain on May 14 as concern that Europe’s debt crisis is deepening boosted the dollar and cut bullion’s appeal as an alternative asset. The metal for immediate delivery rose 0.8 percent to $1,552.38 an ounce at 2:13 p.m. Singapore time after declining yesterday by as much as 1.1 percent to the lowest level since Dec. 29.

That decline may have been excessive as technical indicators show gold is in an oversold position, Australia & New Zealand Banking Group Ltd. said in a report today. Gold’s 14-day relative strength index has been below the level of 30 since May 11, an indicator that the price may rebound.

While gold has a potential to rally to $1,600, silver faces a downside risk toward $26 an ounce, Barclays said, citing a multi-week channel that shows the declining trend. Silver for immediate delivery traded at $27.725, up 1.9 percent after dropping as much as 3.4 percent yesterday.

In technical analysis, analysts study charts of trading patterns to try to predict changes in a security, commodity, currency or index.

That compares with domestic gold purchases of 136.6 tons in 2010 and 142.9 tons in the previous year, according to the news service.

Imports may rise in the June to August period because of “pent up demand” for the nation’s wedding and festival season, the group said today in an e-mailed statement.

(Bloomberg) -- Rejection of Nationalization Positive for South Africa: Moody’s
South Africa’s decision to reject a proposal by the ruling African National Congress’s youth league to nationalize the country’s mines is credit positive for companies in the sector, Moody’s Investors Service said in a presentation handed to reporters in Johannesburg

Canary In The Gold Mine: In Historic Move, Japanese Pension Fund Switches To Gold For First Time Ever – Zero Hedge

Appetiser cost of Greek exit is €155bn for Germany, France: trillions for meat course – The Telegraph