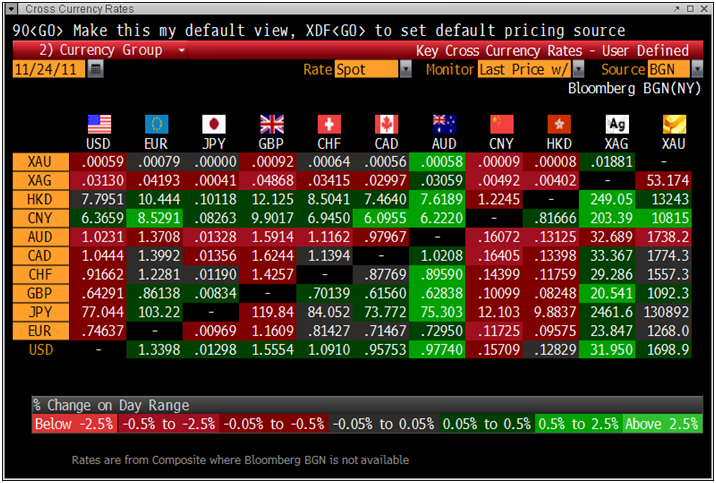 Gold is marginally higher in most major currencies today. Bargain hunters have stepped in seeing opportunity. Gold's recent sell off has seen it become oversold again and value buyers are again buying on the dip.

Chinese New Year buying will commence soon which should contribute to higher prices as it did in November and December of last year when gold rose in both months.

Geopolitical risk remains elevated and Middle East tensions are escalating globally with Russia appearing to be prepared to risk conflict over Syria with NATO and the US. Yesterday, Russian President Dmitry Medvedev threatened to target and, if necessary, destroy the U.S. missile defence shield in Europe once it is built.

A marked deterioration in US–Russian relations and concerns of a new ‘Cold War’ may support gold prices.

While all the focus has been on Europe, and to a lesser degree the US in recent months, two of the other largest debtor nations in the world, Japan and the UK (including corporate and bank debt), have been under the market's radar.

This will change soon and will likely lead to the next phase of the global financial crisis. The fact that we have a global debt crisis which will almost inevitably lead to an international monetary crisis is as of yet not acknowledged or realized by the markets and the media.

Today, the IMF warned in a new report that market concerns over fiscal sustainability could trigger a "sudden spike" in Japanese government bond yields that could "quickly" render the nation's debt unsustainable as well as shake the global economy.

Separately, Standard and Poor's says it's likely that it will cut Japan's sovereign rating again, as the government hasn't made progress in tackling its public debt burden. The agency cut the country's rating to double-A minus in January, and has had a negative outlook on the rating since April.

Japan is forecasting that its debt will exceed a staggering US$13-trillion during the fiscal year ending in March next year. S&P's Japanese director said the public finances were getting "worse and worse every day".

The ‘Land of the Rising Sun' may soon see its economic sun set as the great global rebalancing unfolds.

Japan is not the only nation that’s economic sun may soon set. The greatest debtor nation amongst the G8 is the UK with a total debt to GDP ratio of 497% - much, much higher than Italy’s 313%. 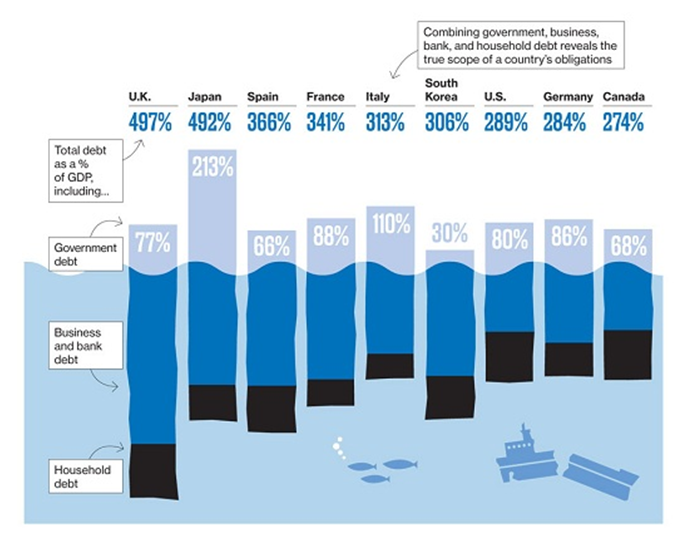 So far the bond vigilantes have focused their activities on the Eurozone but the appalling fundamentals of Japan, the UK and the US may soon see their bond markets come under serious pressure.

The long term debt of the largest debtor nations in the world (10 Years at UK 2.2% ,US 1.88% Japan 0.98%) is currently very expensive and low yielding considering contagion and the increasing sovereign risk involved.

With 10 year bond yields in Germany spiking to 2.24% today, it is only a matter of time before the turmoil inflicted on European debt markets is seen in other large debtor nations.

The net result of this entire global debt crisis is likely to be currency devaluations globally and an international monetary crisis.

Fail to prepare. Prepare to fail.

COMMENTARY
(CNN)
Can Gold Save the Eurozone?

(King World News)
Jim Rickards - Who Will Bail Out the Fed & How High for Gold?

(ZeroHedge)
The UK - Nation With Greatest Combined Debt (Government, Corporate & Household) to GDP in the World