Gold Option Traders Most Bullish Since Bottom In October 2008

Gold Option Traders Most Bullish Since Bottom In October 2008

Gold is mostly unchanged as investors gear up for the US Fed chairman, Ben Bernanke’s speech tomorrow.

Market participants are focussed again on the short term and the silly “will he, won't he?” debate re Bernanke at the Jackson Hole symposium.

Bernanke may again obfuscate and not give clear guidance regarding monetary policy and further QE.

However the smart money such as PIMCO's Bill Gross, Jim Rogers, John Paulson and others believe that further QE and money printing remain inevitable. We would concur and advise investors to fade out the short term noise emanating from Jackson Hole and from assorted policy makers on both sides of the Atlantic and focus on the reality that further monetary easing and currency debasement will continue for the foreseeable future.

There are continuing hopes that the ECB will deliver concrete plans next week that will help diminish the borrowing costs in Spain and Italy and an interest rate decrease is also being mooted.

The German Constitutional court decision on September 12th may finally put to bed whether Germany will allow the ECB to print euros in order to bailout periphery nations thereby debasing the euro.

A new and important bullish indicator for the gold market is that gold calls are at highs not seen since the October 2008 low as option traders go long gold in the belief that it will go higher.

It suggests that option traders believe that U.S. Federal Reserve Chairman Ben Bernanke will hint at or announce additional money printing and monetary easing at the Jackson Hole, Wyoming, symposium.

Alternatively, it suggests that they are bullish on gold due to the risks posed to the dollar and the risk of inflation taking off.

The ratio of outstanding calls to buy the SPDR Gold Trust versus puts to sell jumped to 2.69 to 1 on August 24th and reached 2.76 earlier this month, the highest level since October 2008, according to data compiled by Bloomberg.

Ownership of calls is up 26% since the July 20th options expiry. Ten of the most owned actively owned ETF option contracts are bullish.

Option traders are regarded as savvier and tend to be more sophisticated then the more speculative futures traders.

A similar move today is quite possible given the long period of consolidation in the last 12 months and the strong fundamentals. 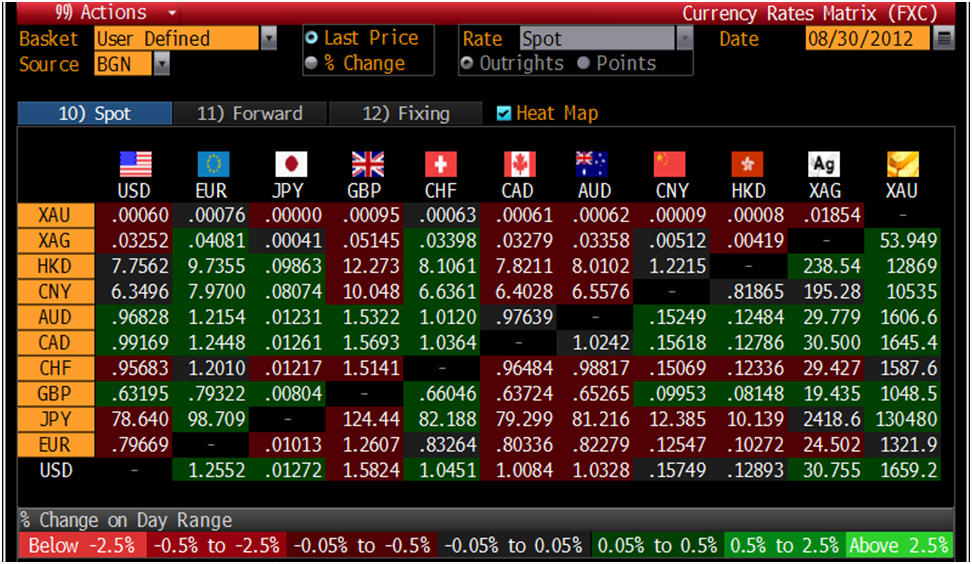 NEWSWIRE
(Bloomberg) -- U.S. Mint Gold-Coin Sales in August at 32,500 Ounces Top July
The U.S. Mint’s sales of American Eagle gold coins were 32,500 ounces so far in August, according to figures from the Mint’s website. The total for all of July was 30,500 ounces.

(Bloomberg) -- Gold ETP Holdings Rise to Record for Seventh Straight Session
Gold holdings in exchange-traded products backed by the metal rose to a record for the seventh straight session.

(Bloomberg) -- Ahmadinejad Says Capitalism Is on ‘Threshold of Collapse’
Iranian President Mahmoud Ahmadinejad urged countries to barter and use their own currencies for trade instead of the U.S. dollar and said capitalism was about to end.

“Domineering capitalism is on the threshold of collapse,” Ahmadinejad said told delegates at a Non-Aligned Movement meeting in Tehran today.

(Philstar) -- Central Bank of Philippines may buy gold abroad
The Bangko Sentral ng Pilipinas (BSP) has warned it may be forced to purchase gold abroad for its reserve requirements should local sales of the metal continue to drop due to taxes levied by the government, a central bank official said.

“If nothing happens, we might be forced to downsize our gold refinery. The effect is that the BSP will not be able to buy gold using pesos,” BSP Deputy Governor Diwa Guinigundo told The STAR in a text message late Monday.

“While gold can be bought from the international market, this will have to be done using (foreign exchange). Foreign exchange reserves will not be increased in the process,” he added.

When asked when the BSP can say that it needs to buy gold abroad, Guinigundo replied: “This is a question of timing policy and therefore not for public consumption.”

Gold is considered as a safe haven in times of foreign exchange volatility, meaning, investors flock to it when currencies around the world are plunging in value to protect their investment. BSP, by law, is supposed to be the sole purchaser of gold from local small-scale miners.

(Bloomberg) -- Platinum May Rally to $1,735 on South African Output Loss: UBS
Platinum may climb to $1,735 an ounce within three months because of production losses in South Africa, which represents almost 75 percent of world mine supply, said Dominic Schnider, head of commodity research at UBS AG’s wealth management unit.